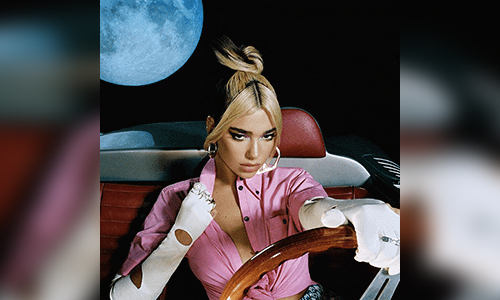 Years from now, when people ask me about the year 2020, I won’t talk about the trainwreck that has been the current election cycle, the craziness of the coronavirus pandemic or how I was once in the NPR office within 24 hours of my future husband Harry Styles.

Instead, I’ll tell them about the masterpiece that was Dua Lipa’s sophomore album Future Nostalgia.

Built from a disco-inspired core and held up by killer bass riffs, immaculate vocals and an airy, carefree attitude that is direly needed in a world ridden with uncertainty, Future Nostalgia is a 37-minute long escape from all that has you feeling downtrodden.

From the opening title track, Dua transports you to a funky pop realm where she immediately makes it clear she’s not trying to fit into anyone’s mold. The first line says it all: “You want a timeless song, I want to change the game.” This album is clearly Dua’s world, and we mere plebeians are simply allowed the luxury to exist in it.

Following right after is the smash lead single “Don’t Start Now,” which one of my friends disappointedly referred to as “that ‘full 180’ Tik Tok song.” The bass on this track reverberates through my entire body and awakens something within me that makes me just want to dance like an idiot until one of my legs falls off. Charlie Puth bass lines could never.

[Read more: The chronicles of celebrities living life during a pandemic]

“Physical” and “Break My Heart” also dropped before the album, and each one excites me in ways I could have never fathomed. When “Physical” comes on, I’m the hot, sexy leader of my own ‘80s-style workout class, where the only participant is, you guessed it, Harry Styles. “Break My Heart” is the theme track of the romantic comedy I star in and get tragically snubbed for at the Golden Globes. The latter sees the return of that bass guitar that almost makes me want to break quarantine to run to the nearest dance floor and shake my booty like a damn fool.

To put it simply: Dua does not miss on this album. Out of the 11 songs, all 11 of them are hits. It may seem like a cop-out, but if I were saying anything bad about any of them, I’d be committing journalism’s cardinal sin — libel — and no one wants that.

If I had to attempt to choose a favorite, it would be between either “Hallucinate” or “Good In Bed.” “Hallucinate” is a hypnotically upbeat banger that sees the return of the inescapably infectious bass riff. “Good In Bed” is a quirkier, sing-songier track where Dua finds herself talking a little more frankly about the dirty than she usually ever does, dedicating an entire verse to the “good pipe in the moonlight.” Both tracks are shamelessly fun earworms.

Every track is so uniquely delightful that every time you listen through Future Nostalgia, you have a new favorite track. One time it might be “Levitating,” the laidback song for Dua’s “sugarboo,” or another instance it might be “Boys Will Be Boys,” the unapologetic call-out of men being allowed to act like assholes with few repercussions.

Future Nostalgia comes at such a pivotal time, where the sound of what “pop” music is changes by the day. This will be the blueprint for all the pop music to come in the budding decade. And whether this album transforms you into a Dua Lipa stan or simply distracts you from the gloomy days of quarantine, it’s undisputed that this album will ultimately go down as a classic.