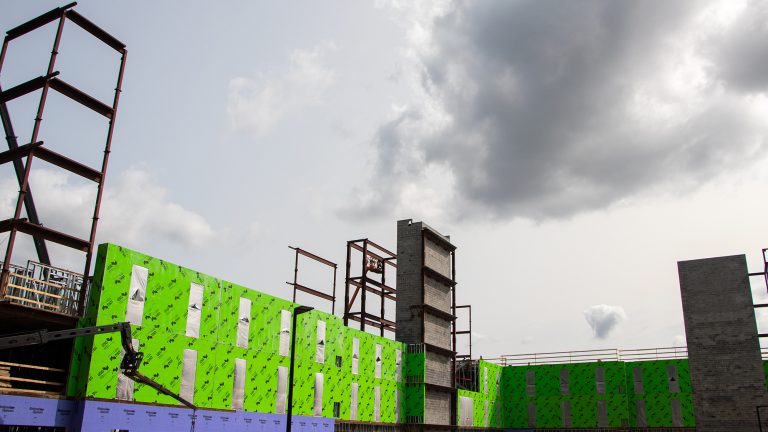 Despite some small delays due to the coronavirus pandemic, construction projects on the University of Maryland campus are largely on track to meet original deadlines, said Bill Olen, the planning and construction executive director for Facilities Management.

This time, though, crews are working with social distancing guidelines and COVID-19 screenings, Olen said.

“Because the governor of the state of Maryland declared construction essential, none of the projects stopped,” Olen said. “Delays were minor, and we’ve gotten past that and moved forward.”

Olen said that material supply chain issues and manpower shortages created minor delays in the spring for these projects, but they didn’t greatly impact the deadlines of these ongoing construction projects.

Despite the $292 million budget cut the university will experience in fiscal year 2021, none of the construction projects will be impacted since they were previously approved and already underway. The cuts so far have been to operating budgets, not capital budgets, Olen said.

Here are some updates on the campus construction projects since the campus closed in the spring:

The project — which is set to cost $205 million, according to Olen — is slated to be completed by the end of the year. It’s been under construction since 2015.

The 430,000-square-foot building will offer 150,000 square feet for academic research, and the rest will be used for athletics, including an indoor practice facility.

Two dorms between the Ellicott and Cambridge communities are set to be completed by fall 2021, according to Olen.

The dorms will be able to house roughly 900 new students, according to Olen. Their total square footage is 271,000 gross square feet and the budget is $129 million.

A dining hall in the same area is set to replace the North Campus Dining Hall and will be roughly 70,000 square feet with a budget of $56 million. Olen said it will take Dining Services some time to prepare the new space due to training and inspections. The dining hall is slated to open in fall 2022, according to Olen.

Wings two, three and five of the Chemistry Building are undergoing renovation so that all employees in the first wing can shift over by early next year, according to Olen. The approved budget for the three wings is $14 million.

Facilities Management has started to receive money to replace wing one, and the budget for that renovation is $118 million. Construction on the 105,000-square-foot project will begin early next year.

The new building will primarily be used for research for the computer, mathematical and natural sciences college, said Olen.

The $62 million building, located next to the Chapel Field, is set to be completed by late spring 2022.

After growth in undergraduate and graduate admissions, the public policy school outgrew its space in Van Munching Hall, said Olen.

The new building will be roughly 77,000 gross square feet.

With an approved budget of $60 million, the 60,000-square-foot addition to the Kim Engineering Building will house research, offices, entrepreneurial enterprises and a quantum science center.

It is set to be completed by the end of 2021, according to Olen.

CORRECTION: Due to an editing error, a previous version of this story misstated the construction timelines of the North Campus dining hall and dorms projects. The dorms are set to be completed by fall 2021. The dining hall is set to be open in fall 2022. This story has been updated.