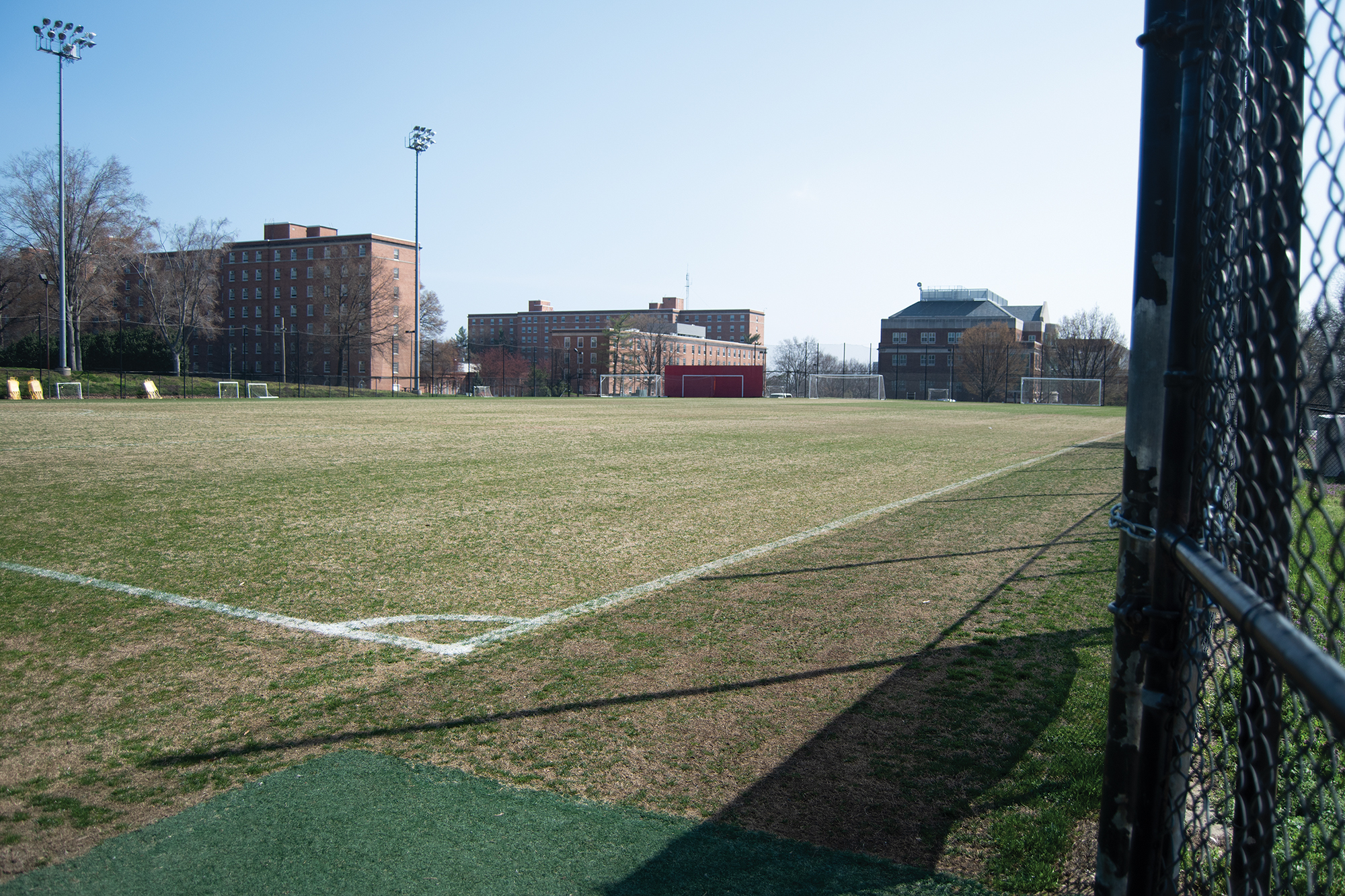 A view of the Varsity Practice Fields on April 6, 2019 (Joe Ryan/The Diamondback).

Construction for two dorms and one dining facility on the University of Maryland’s campus is scheduled to begin June 20, pending approval of building permits from the state.

The dining facilities and one of the new dorms will be on the Varsity Practice Fields, and the other dorm will be between that field and La Plata Beach, said Department of Resident Life spokesperson Tracy Kiras.

The dorms — which will be used as overflow spaces for students as other dorms are renovated — are expected to be ready by fall 2021, but could be delayed by weather or other conditions. First-year University Honors students will be housed in one of the new buildings, said Resident Life director Deborah Grandner.

The construction is part of the university’s updated 15-year Strategic Housing Plan, an outline of how the school plans to modernize campus buildings first published in 2014.

There will be 902 beds between the two dorms. The buildings will each have one multipurpose room, and there will be two study lounges and two general lounges on each floor, according to the department’s website. These are all features that students had said were “high-priority items,” said Kiras.

“I think [these] will be very appealing to residents as we’re forming these interactive communities,” said Kiras.

The Residence Hall Association has regularly given Resident Life feedback on the plan since 2014. It will continue to meet with the department to discuss things including what they would like to see in the lounges and the layout of the rooms, said RHA vice president Ben Reichard. The next meeting is scheduled for April 25.

“The big-picture stuff they already have figured out, so if we give feedback, it’s mostly smaller-detail stuff,” said Reichard. “I think it’s great that we have the opportunity to give feedback like this.”

The budget estimate allocated $101 million for the construction of the two dorms.

“We’ve been saving in our savings account for years,” said Residential Facilities director Andrea Crabb. “We’ve been planning to do this.”

The new dining facility — which will replace the North Campus Dining Hall — is expected to have 1,055 seats, according to the webpage for the project. It will have a station for vegan food, comfort food, Latin-American food and Asian-style food, as well as a separate, allergen-free station, salad bar and bakery.

The new facility will also have gender-neutral bathrooms, according to the webpage.

The new dining hall was originally going to be built on Lot 1 — a plan that was scrapped due to the already limited parking on the campus. The renovation of Cole Field House freed up the Varsity Practice Fields for construction, Grandner said, by giving soccer players another place to practice.

“Since we weren’t going to be able to build on Lot 1, we thought this would be a good site,” Grandner said. “[The dorms will be] close to the other buildings on the North Campus, it’s close to where the other honors buildings are.”

“Our plan is to not be disruptive to students and try to keep it contained to the construction site as much as possible,” said Crabb. “That being said, it is construction and there will be noise.”

Once these dorms are completed, renovations to several other North Campus dorms, such as Hagerstown Hall, can begin. These renovations will span from adding air conditioning to making buildings more sustainable, Crabb said.

“That’s why these halls are so important,” Crabb said. “The whole schedule … is all predicated on when these halls are finished. So if we have really bad weather or anything delays it, then we have to adjust the plan.”