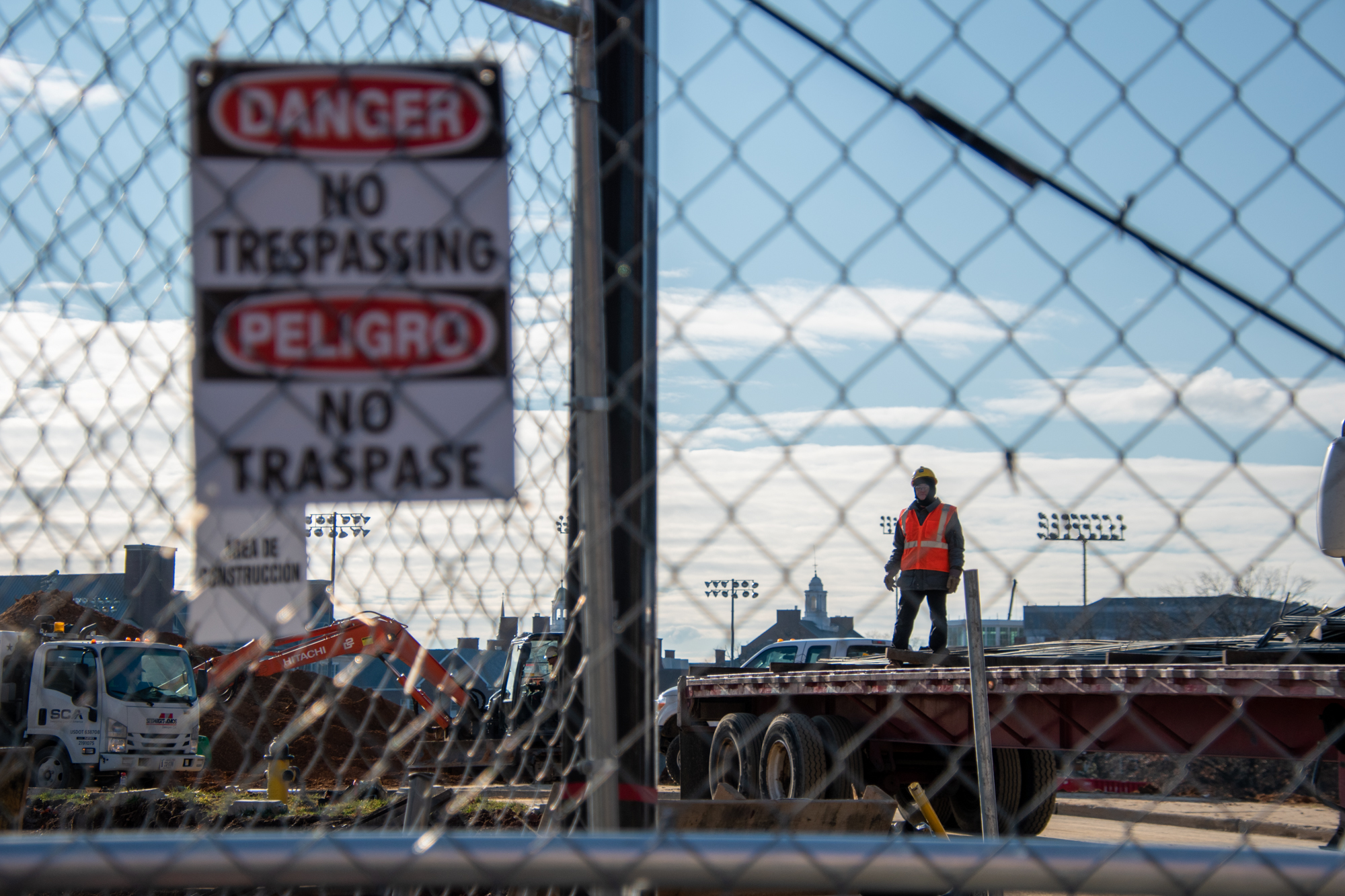 A worker stands on the bed of a truck in the construction site of the new residential buildings on North Campus on Jan. 28, 2020. (Joe Ryan/The Diamondback)

As the spring semester begins at the University of Maryland, here’s a look at what’s going on with some of the major construction projects around campus.

Construction on the $210 million project — which will cost $55 million more than originally planned — began in 2016. It is being paid in part through university funds, and it’s a joint partnership with the University of Maryland, Baltimore.

The Field House will double as a facility that will oversee research into concussions and other brain behavior, said Brian Ullmann, this university’s Executive Associate Athletic Director. It will be called the Center for Brain Health and Human Performance.

“It’s transformative for our athletic department,” Ullmann said. “It’s just an exciting moment to see it from start to finish. And I think people are going to be blown away by what this facility means for athletics, and what it means for the university.”

This semester, the university’s “M” Circle will be relocated to make way for Purple Line construction. There will also be storm drain construction along Campus Drive, according to this university’s Division of Administration and Finance.

The new “M” Circle will be located across Campus Drive near the Mitchell Building. The current “M” will not be removed until the new one is complete, Shaquanna Shields, communications supervisor for the Purple Line Transit Partners, wrote in an email.

There will be five stations on or around this university’s campus when construction is finished — expected in late 2022 — including one between the Stamp Student Union and Cole Field House.

Preliminary site work on the E.A. Fernandez IDEA Factory began last month, about one year after the project’s groundbreaking.

Construction workers expanded the fencing area and removed some trees within the area, Olen said. Preliminary work on the building’s foundation system is expected to begin in the early spring, he added.

The $60 million building will replace the recently-demolished Potomac Building, and it will be connected to the Jeong H. Kim Engineering Building.

In the new building, engineering students will have an opportunity to use new prototyping facilities and four new laboratories that focus on robotics, manufacturing, quantum technology and transportation.

Within the next few months, construction workers will start to insulate underground utilities and build the foundation for two new dorms and a dining hall on North Campus will begin, Olen said.

The Varsity Practice Fields — a former practice area for sports teams — and a section of Farm Drive were shut down ahead of the project. Due to the road closure, the roads on North Campus will be permanently reconfigured, and Farm Drive will consist of two loops around the Ellicott and Cambridge communities.

The dorm project is part of the Department of Resident Life’s 15-year housing plan. Students in the University Honors Living-Learning Program will live in one of the new dorms, leaving their current home in Hagerstown Hall.

Olen said substantial completion is expected to be complete by the end of 2021.

The parking lot adjacent to the Lee Building closed at the end of last year, as the insulation of underground utilities began for the new School of Public Policy building.

The 70,000 square-foot building will be located between the Lee Building and Rossborough Inn. The $52.4 million project is being funded using money from the university, the state and an anonymous donor.