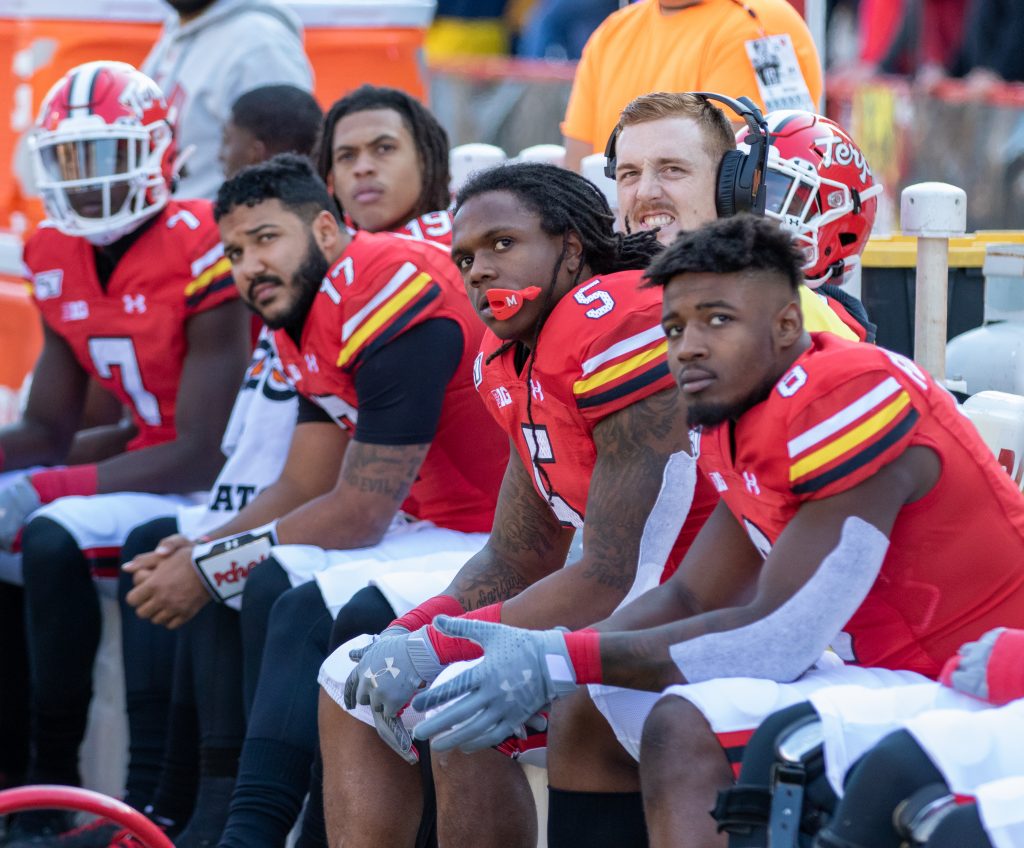 COLUMBUS — In an age where merely winning doesn’t mean as much as obliterating, when College Football Playoff seedings can change based on how many points a team posts on some unfortunate loser, Ohio State’s decision to run an onside kick in the first quarter perhaps wasn’t as surprising as it first seemed.

After going up two scores on Maryland football — the unfortunate loser Saturday — Ohio State kicker Blake Haubeil lined up to kick off as usual. But he popped the ball up down the sideline, perfectly leading gunner Chris Olave and catching the Terps’ special teams unit off guard to steal back possession and set up another touchdown drive.

The Buckeyes would’ve been fine without that play. Maryland showed little ability to do anything except give up points. But when you’re at the top of college football, a 73-14 drubbing over lesser competition is standard operating procedure, and letting up isn’t in the manual.

And when the Terps opted to join the Big Ten in 2014, this is what they signed up for, competing in a gauntlet like the Big Ten East and getting devoured along the way. On Saturday, they allowed the most points since 1913. Coach Mike Locksley means to change that. In his first year, though, Maryland has endured its fair share of blowout defeats. Saturday was just another in a season-long slog.

“We’re a better team than what we showed,” Locksley said. “We just don’t show it consistently. And that’s on me to get our guys to be able to play a little bit more consistently. But whether it’s 73 or it’s a one-point loss, they are the same.”

[Read more: Against his former team, Keandre Jones’ focus is on leading for Maryland football]

The Terps (3-7, 1-6 Big Ten) elected to receive the opening kickoff, perhaps envisioning a similar start to the contest as last year, when running back Anthony McFarland broke away for an 81-yard score on the second play against Ohio State. This time, though, Colton Spangler punted the ball away, triggering the start of six straight Buckeyes (9-0, 6-0) drives ending with touchdowns.

There was Binjimen Victor’s 12-yard reception and quarterback Justin Fields’ 4-yard rush, as Ohio State became the fifth straight team to score two touchdowns on its first two drives against the Terps.

“We struggled to get off the field on third down,” linebacker Keandre Jones said. “That’s up to us as a defense. … We’ve got to go back to the drawing board.”

That onside kick attempt added insult to injury and went better than Maryland’s try last year. After McFarland’s rushing touchdown on the opening possession of an eventual 52-51 overtime loss, the Terps gambled and it paid off, recovering an onside kick. But wideout Jeshaun Jones fumbled on the ensuing drive, dashing a chance to go up two scores.

The Buckeyes would have no such miscue Saturday, though, turning the onside kick into another seven points following an eight-play, 57-yard drive. Running back J.K. Dobbins rumbled to the end zone twice in the second quarter after another Fields touchdown pass, establishing a 42-0 advantage at intermission.

“We talked to them early,” coach Ryan Day said. “If the timing is right on the third kickoff and we have the opportunity, we’ll take that. And I think the guys fed off that aggressiveness.”

Maryland could hardly move the ball — it took until the second quarter for Locksley’s squad to string together two consecutive plays that went for positive yardage. They rotated between quarterbacks Josh Jackson and Tyrrell Pigrome, and the results remained lackluster no matter who was under center.

The Terps finished the first half with 66 yards compared to Ohio State’s 363. The Buckeyes were 8-for-8 on third-down conversions, their punter never saw the field in the opening 30 minutes and a 15-minute halftime break did nothing to slow their pace.

“It was a large lead at the half,” said Javon Leake, who moved into sixth all-time for Maryland return yardage. “But coach just said, ‘Keep fighting.’ You know, can’t give up, even though they’re up by this much.”

Fields didn’t even take the field for the second half. Instead, it was Chris Chugunov under center for the third and Gunnar Hoak in the fourth. And while Jones forced a fumble on Ohio State’s first drive out of halftime, linebacker K’Vaughan Pope intercepted Pigrome on the very next play.

Two plays later, Chugunov dropped in a dime to Garrett Wilson — just another blip in an onslaught.

Dontay Demus and Tayon Fleet-Davis got the Terps on the board in the second half, but it wasn’t much of a contest. Defensive coordinator Jon Hoke’s defense allowed a season-high 705 yards while the offense managed 139, ending any hopes of reaching bowl eligibility. It was an ugly loss, but it’s hardly the first.

Maryland’s been in this position before, losing 59-0 to Penn State and 52-10 to Minnesota this season. When the Terps face the Big Ten’s best, the results are often skewed this way. And it’ll be Locksley’s job to turn this from a norm into an anomaly.

“We really try to focus on just doing the best job we can today,” Locksley said. “And today, we didn’t do a very good job.”