Against his former team, Keandre Jones’ focus is on leading for Maryland football 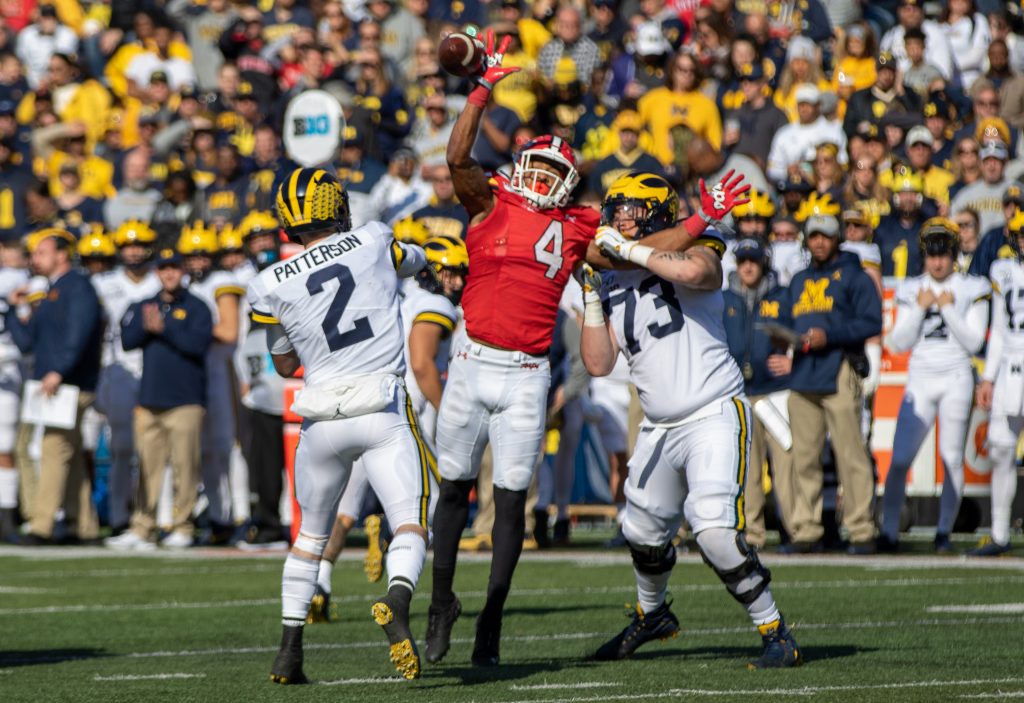 Keandre Jones is still in his Ohio State football group chat, full of former teammates — some of whom remain in Columbus while others, like himself, have since departed.

“Shoutout to the 2016 class,” said Jones, who’s now an integral part of Maryland’s defense. The linebacker said he hadn’t heard any banter from his former teammates in the buildup to his return to Ohio Stadium — no subtle jabs about the Terps or the kind of trash talk that can flow between friends-turned-foes for a week.

What he has read, though, is plenty of excitement for what’s building at Ohio State, including an 8-0 record, a No. 3 ranking in the AP Poll and a projected top seed for the College Football Playoff. That’s what he gave up to join his state school for one last season with an increased role, and that’s what he’s missing out on as he helps Maryland through a developmental year.

But ahead of Saturday’s matchup with the Buckeyes, Jones hasn’t let the talk in his group chat faze him. He’s at peace with his decision, joining coach Mike Locksley’s squad to be as much of a playmaker as a teacher, instilling characteristics learned at a perennial powerhouse into the younger players at Maryland in the hopes of turning a Big Ten bottom-feeder into a competitive outfit down the road.

“A bunch of those guys talk and brag about what they’ve got going on,” Jones said. “All I can do is focus on what I have here, the University of Maryland, and make sure we handle our business and continue to play hard and aggressive.”

Through nine games with the Terps, Jones has accumulated 45 tackles and a team-high six sacks, more than he managed in three full seasons with the Buckeyes. Last year, when Maryland came within one failed two-point conversion of upsetting Ohio State, Jones was primarily playing special teams.

So after Ryan Day took over coaching duties with the Buckeyes, Jones opted to transfer to College Park, eyeing increased playing time in his final year of eligibility. He’s featured in 515 snaps this campaign (340 more than he received in three years combined at Ohio State) as a central figure in a Terps defense that lost multiple starters at the end of last season and has slimmed even further through injury in 2019.

To Jones, however, Maryland offered more than just time on the field.

That motivation was something Day got behind.

“Great to see him playing with a lot of passion, effort,” the first-year coach said this week. “Nothing but respect for he and his family. Got an opportunity to go closer to home. We supported that the best we could. Certainly didn’t want to see him leave, but we also understand.”

[Read more: In the thick of Big Ten play, Maryland football’s pass-rush continues to lag behind]

Locksley has long maintained that adding Jones and other players with experience at big-time programs, such as linebacker Shaq Smith from Clemson and quarterback Josh Jackson from Virginia Tech, offers an example for teammates to follow.

Locksley wants to build that sort of program in College Park. He pulls on his time as offensive coordinator at Alabama, and he hopes players such as Smith, Jones and Jackson can help enact change and create results that may not manifest until years down the line.

“The leadership [Jones] brought to this program obviously, I think, is a direct reflection of what he’s learned from the experiences he’s had at a place like Ohio State,” Locksley said. “It’s been great to have that here in our locker room and for our younger players to utilize him as a resource for how you approach the game, how you approach practice, how you approach school.”

Even Jones, an even-keeled player, admitted Saturday’s game would have extra significance. But he quickly added how this whole season, his final college football campaign, has been full of emotion.

He’ll enter the Horseshoe on Saturday and turn toward the visiting locker room. He’ll see familiar faces at every turn, on and off the field. He’ll say goodbyes to old friends and board the team bus and fly back to College Park and away from the school he once called home.

He’s known this matchup would have to come since he joined Maryland. It doesn’t make it any less meaningful.

“I’ve had this game marked since I transferred from Ohio State,” Jones said. “I’m excited, anxious, to get out there on the field.”