Maryland football vs. No. 1 Ohio State: How to watch and what to watch for 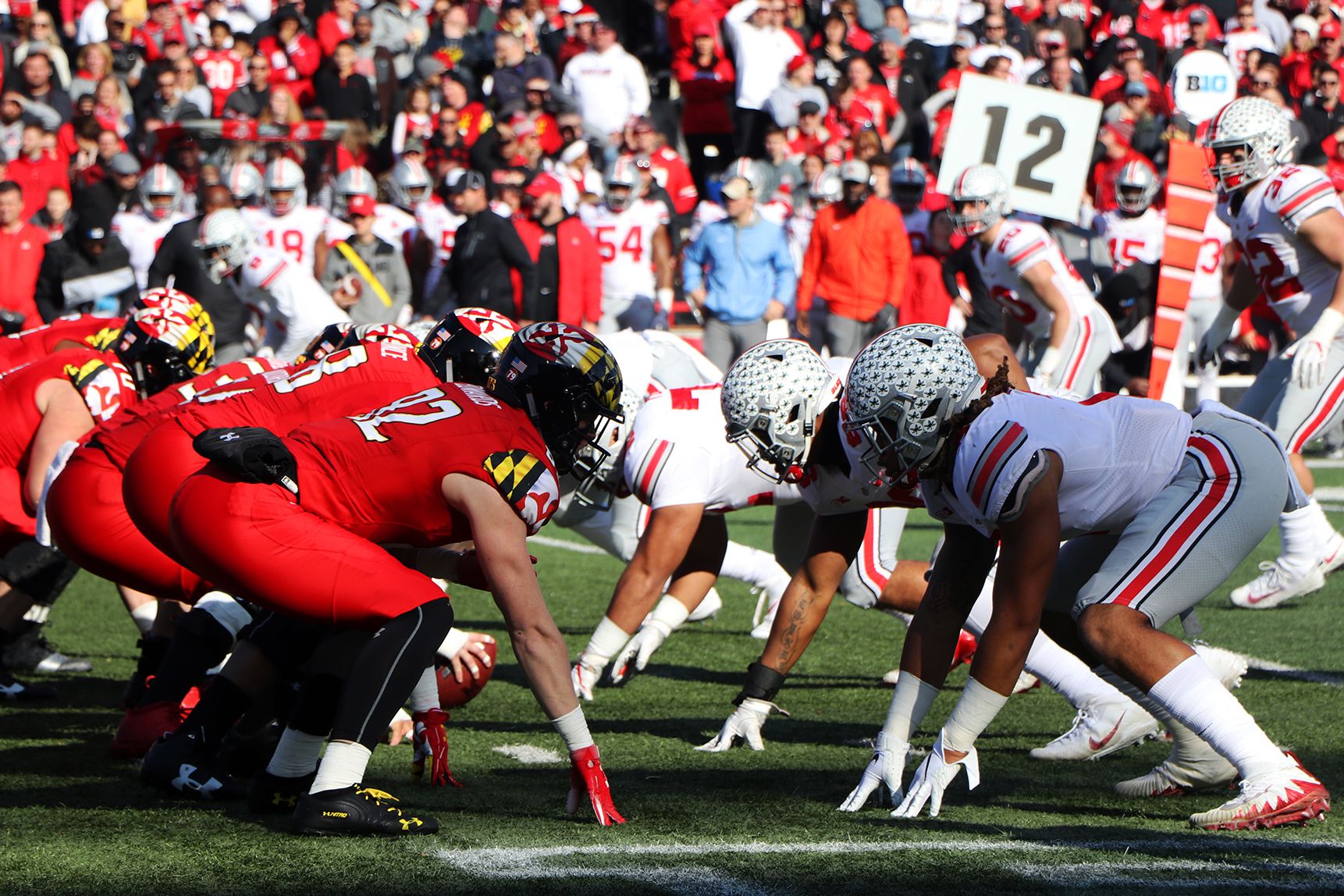 The Terps’ offensive line prepares for the snap during their 52-51 loss to No. 9 Ohio State at Maryland Stadium on Nov. 17, 2018. (Julia Nikhinson/The Diamondback)

The reason why Maryland had any chance of upsetting the Buckeyes at home last season was the running game, led by Anthony McFarland. He rushed for 298 yards and two touchdowns in the one-point loss. The Terps ran for over 300 yards that game and had Ohio State on the ropes. McFarland hasn’t had the success he did last season, but a good game from him and Javon Lake could put the Terps in a position to pressure Ohio State.

Maryland is ranked 85th in the nation in total defense, allowing 413.8 total yards per game. They are also ranked 111th in passing yards allowed, giving up nearly 263 yards per game. Ohio State prides itself on running the ball, and star quarterback Justin Fields hasn’t thrown for more than 240 yards in a game this season, so the line will need to be stacked against running back J.K. Dobbins and company. The Buckeyes are going to grind out the game and run a lot of plays on offense, which the Terps need to be prepared for.

One place where the Terps can exploit Ohio State is the return game. Maryland is 14th in the nation in kick returns, averaging more than 25 yards per return. The Buckeyes are 59th in the nation, allowing an average of 21 yards per return, so good field position will be key to Maryland’s success, considering how good Ohio State’s defense is. The fewer yards the Terps need to get on offense to score, the better that will be. However, grinding out the clock to keep Ohio State’s defense on the field is very important too, so a nice balance of both would be ideal for an upset bid.

Dobbins is the go-to impact player on the Ohio State offense. Maryland knows him well, as he went off for 203 rushing yards and a touchdown against the Terps last season. The junior is having an even better 2019 season, rushing for 1,110 yards and nine touchdowns through eight games while averaging 138.8 rushing yards per game. Don’t be surprised if Dobbins goes off again Saturday.

2. Justin Fields and an explosive offense

Fields, the transfer quarterback from Georgia, has picked up where 2018 Heisman Trophy finalist Dwayne Haskins left off. He’s not as flashy through the air as Haskins, with 1,659 passing yards so far this season, but his touchdown-to-interception ratio is off-the-charts. Fields has 24 passing touchdowns to one interception, and he’s thrown for three or more touchdowns in five games this season. He’s a big reason why Ohio State is third in the nation in scoring offense, scoring 48.3 points per game. The Buckeyes are also sixth in the nation in total offense, averaging 514.8 yards per game.

If you thought the Buckeyes are dominant on offense, they are even more dominant on defense. They have the nation’s leading scoring defense, limiting opponents to 7.9 points per game while allowing 224.3 yards of total offense, second-best in the country. The Buckeye defense is led by junior defensive end and DeMatha Catholic product Chase Young, who is having a Heisman-type season so far. Young leads the nation with 13.5 sacks and is second with five forced fumbles. He will create havoc that Maryland will have to try to deal with, but no team before them has been able to do so.