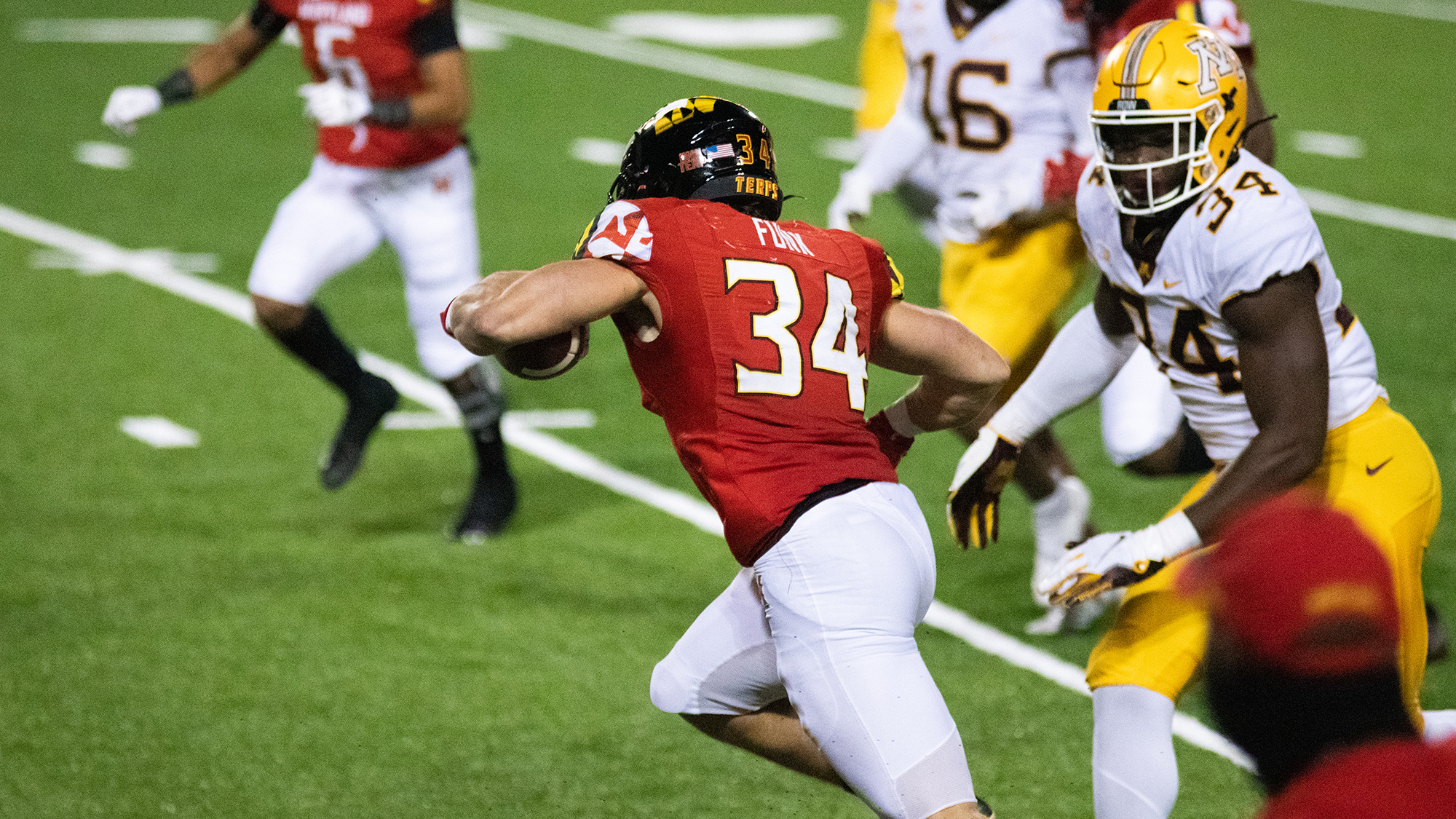 Maryland running back Jake Funk breaks away from Minnesota defenders in the Terps’ 45-44 overtime win over the Gophers on Oct. 30, 2020 at Maryland Stadium. (Julia Nikhinson/The Diamondback)

With Week 10 already upon us, the Terps in the NFL have had several weeks to show off their skills as talented playmakers. Here’s a look at some former Terps who are expected to continue making a difference this weekend:

Stefon Diggs, WR, Buffalo Bills: Now established as the most dominant Terp in the NFL, Diggs has continued to show up and show out in every game this season, averaging 14.3 yards per catch with over 850 receiving yards in just eight games. After a season-low of five receptions last week, Diggs is expected to bounce back against Minnesota if quarterback Josh Allen manages to overcome his lingering elbow injury. If not, Diggs’s production will fall reliant on the ability of backup quarterback Case Keenum this week.

D.J. Moore, WR, Carolina Panthers: Just two weeks ago, D.J. Moore had his most productive game of the season with 152 receiving yards and a single touchdown. Surprisingly, backup quarterback PJ Walker was the one throwing the ball to Moore last week. Moore is shaping up to have a promising week against a shaky Atlanta secondary. With a healthy Baker Mayfield at the helm again, we’ll have to see if Moore is targeted as much as he was with Walker. Last week against the Bengals, Moore had just two receptions from Mayfield for 24 yards.

Chigoziem Okonkwo, TE, Tennessee Titans: On Tennessee’s first offensive snap of the game, rookie quarterback Malik Willis completed a short pass to Chigoziem Okonkwo that was taken 48 yards into Kansas City territory. Unfortunately for Okonkwo, that would be his last reception of the day despite being targeted two more times in the Titans’ 20-17 overtime loss to the Chiefs on Sunday. Okonkwo will likely remain in a limited snap count again this week against Denver, but having six receptions for 100 yards in just eight games goes to show he is developing into a versatile tight end who can serve as a deeper threat on the field.

Jake Funk, RB, Indianapolis Colts: On Tuesday, the Saints cut Funk less than a month after signing him to their practice squad. Funk, who never saw the field with New Orleans, just signed with a team that has had a tumultuous week, the Indianapolis Colts. The Colts fired head coach Frank Reich on Monday, following an abysmal 26-3 loss in New England. Indianapolis hired their former all-pro center Jeff Saturday as interim head coach, a move that has been criticized by many in the football world.

Firing a head coach in the middle of the season does not typically translate to team success, however bad teams tend to have ample opportunity for players to prove themselves. Additionally, the Colts’ star running back Jonathan Taylor has been battling an ankle injury recently, so Funk may have a chance to see the field soon.

Darnell Savage, FS, Green Bay Packers: With 24 solo tackles — and 31 combined — Darnell Savage has proven himself a valuable asset to Green Bay’s defensive unit with the eighth most tackles on the team. Savage will have a big responsibility this week having to stop Dallas’s talented wide receiver corps consisting of CeeDee Lamb, Noah Brown, Dalton Schultz, and Michael Gallup.

Nick Cross, SS, Indianapolis Colts: Nick Cross has had a quieter role behind Rodney McLeod at strong safety this season. His best week was week two against the Jaguars in which he recorded five tackles, three of which were on his own. The Raiders are -6 point favorites against the Colts this weekend, meaning Cross could see extra playing time if McLeod struggles covering Davante Adams on deeper routes. It should be interesting to see how the new coaching situation in Indianapolis could impact Cross in terms of playing time.

Yannick Ngakoue, DE, Indianapolis Colts: Another member of the Colts defense, Yannick Ngakoue has the second most combined tackles,17, at the defensive end position behind Kwity Paye who has 24. Ngakoue currently leads the defense with 4.5 sacks and looks to build upon that number against the Raiders’ offensive line which has allowed a whopping 19 sacks so far this season.