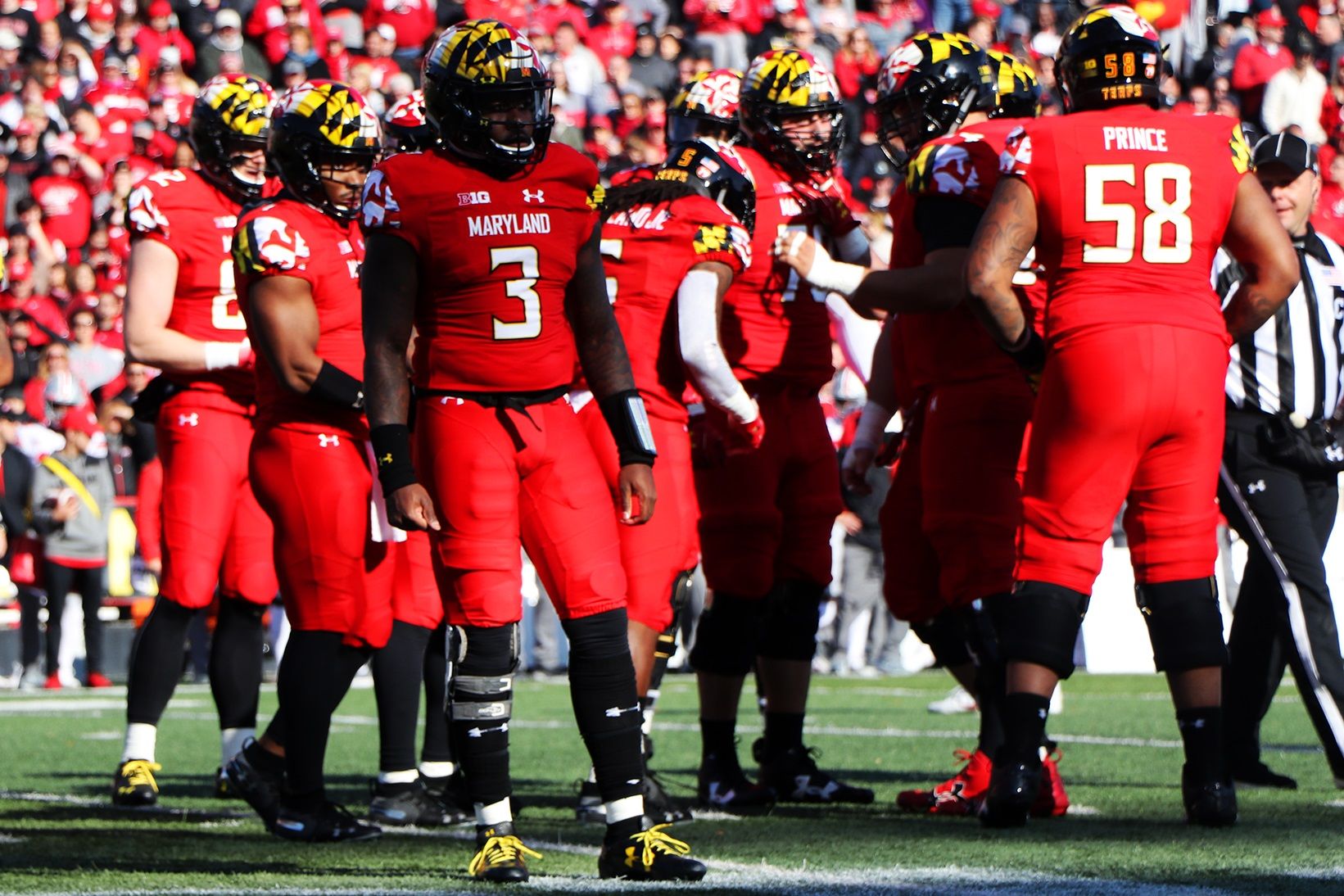 Quarterback Tyrrell Pigrome looks toward the sideline for a play call while the offense huddles during Maryland football’s 52-51 loss to No. 9 Ohio State at Maryland Stadium on Nov. 17, 2018. (Julia Nikhinson/The Diamondback)

Chigoziem Okonkwo crouched with his face in his hands near the 45-yard line. Moments prior, he’d thrown his helmet and both gloves to the ground. About a minute prior, Tyrrell Pigrome’s pass fell incomplete, and the Terps two-point conversion failed.

It was Okonkwo’s fumble recovery that gave Maryland football a one-score lead late in the fourth quarter, but No. 9 Ohio State rolled through the Terps’ defense to force an overtime.

And in the extra period of a game Maryland had never trailed until the Buckeyes’ touchdown in the first overtime period, the Terps went for the win, as underdogs are wont to do when they punch above their weight.

Following Tayon Fleet-Davis’ score, the offense stayed on the field. Pigrome rolled right, had Jeshaun Jones open in the end zone but misfired. The ball hit the turf. So did Jones, in apparent anguish. So did Okonkwo, and countless other players who could almost taste Maryland’s sixth win of the season before it was wiped away, turning into a 52-51 loss in the cruelest of circumstances.

“We are distraught right now,” linebacker Tre Watson said. “There are no words that can reconcile what happened to us.”

Earlier in the game, Avery Edwards laid on the field about 70 yards from where Pigrome’s pass found Darryl Jones near the goal line, in elation rather than the despair displayed by Okonkwo and Jeshaun Jones.

For a team that has honored offensive lineman Jordan McNair throughout the season — who died June 13 after suffering heatstroke at a team workout two weeks earlier — and a group of seniors who played for four coaches during their career, Saturday was so close to a defining moment.

On the second play of the game, Anthony McFarland broke free for an 81-yard score. It was the start of a wild opening 59 seconds in which McFarland scored, Maryland recovered its own short kickoff and then fumbled on the next play.

On McFarland’s third carry, he got loose again for a 75-yard score that established a 14-3 lead. The redshirt freshman scampered for a 52-yard gain in the second quarter and converted a 4th-and-3 — part of his 231 first-half rushing yards, most in school history for a running back — to set up Javon Leake’s 16-yard score.

“Hats off to the O-line as always,” said McFarland, who finished with 298 yards. “Without them, I wouldn’t do anything.”

After serving as a rushing threat for most of the season, Pigrome took over for Kasim Hill this week after Hill’s torn ACL and said at practice Tuesday he wouldn’t be limited with how much he could throw.

With McFarland slicing through Ohio State’s defense, Pigrome hardly needed to drop back to pass in the first half, but he showed off his arm with a 56-yard pass to Dontay Demus in the first quarter and supplied more passes late to keep the Buckeyes on upset alert. He finished 6-for-13 with 181 yards.

“I had no doubt he was going to come in and make plays,” McFarland said. “He had a hell of a game.”

Ohio State nearly tied the game with less than a minute before halftime. But after J.K. Dobbins fumbled near the goal line and Dwayne Haskins threw a pick-six to open the second half, the Terps were back up by 14, and Buckeyes coach Urban Meyer was doubled over on the sideline.

The Terps defense hadn’t faced such a high-powered offense this year, and at times Ohio State produced steady gains and chipped away at its deficit. But three times when protecting a one-score game, Maryland’s defense forced turnovers that buoyed a squad struggling to move the ball.

Overshadowed in the first half, Haskins showed his might in the second, apart from the pick-six. He finished 28-for-38 with 405 yards, launching a 68-yard touchdown to Terry McLaurin in the second quarter as one of his three passing touchdowns. He added three rushing scores, forcing overtime and then scoring in it.

Pigrome, in his limited attempts, flashed an affinity for the deep ball. After Wade Lees faked a punt and fired to Taivon Jacobs to convert a 4th-and-5 in the fourth quarter, Pigrome dropped in a dime to Jeshaun Jones for a touchdown. Then, with about three minutes remaining, Pigrome hit Darryl Jones for 60 yards down to the one-yard line.

“He made some big-time throws,” interim head coach Matt Canada said. “He put us in a position to win the game.”

For all the remarkable carries McFarland made Saturday, Okonkwo had to rescue the Terps’ hopes after McFarland fumbled at the end zone. But Haskins orchestrated a drive to force overtime, and then gave his team its first lead in the first overtime period.

Maryland quickly answered and decided to go for two. Canada said there were two options for the 2-point conversion playcall, and he and Pigrome both agreed on the rollout pass. But it fell wide, and the Buckeyes fans who helped fill Maryland Stadium were jubilant while Jeshaun Jones covered his head and Okonkwo was left in dismay. 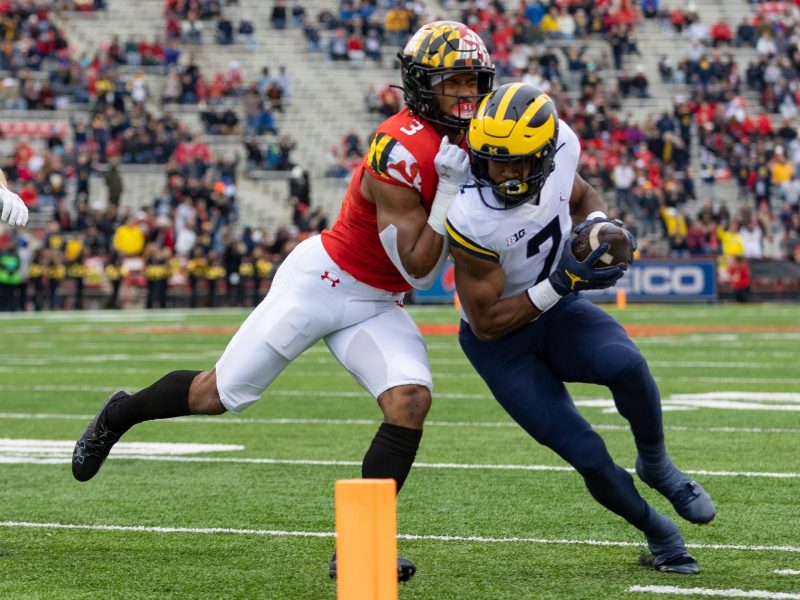