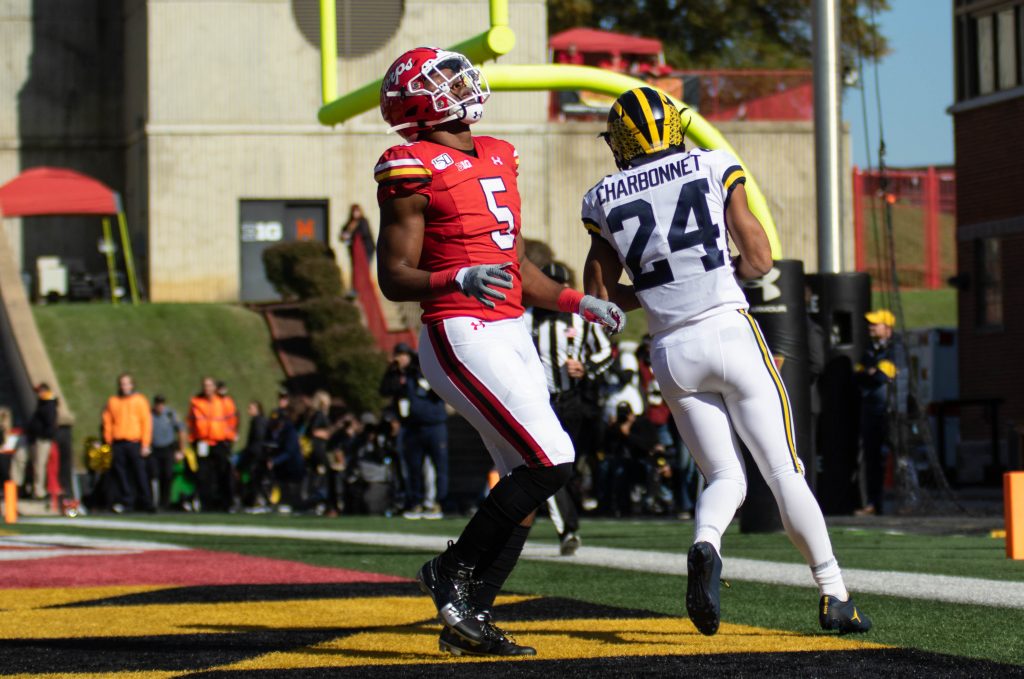 Michael Barrett had done this before, in a close contest against another seemingly inferior opponent. Back then, when the Michigan upback received the direct snap in a punt formation in early September, he whipped a fourth-down throw for a first-down conversion that led to a crucial touchdown in an overtime win over Army.

When the Wolverines faced a fourth-and-1 at their own 27-yard line Saturday — already leading Maryland football by 14 points but facing their third straight three-and-out — Barrett lurked in the backfield once more. He received the direct snap and this time bulldozed through the line, finally dragged down 14 yards later to create another game-changing play from the punt unit.

Quarterback Shea Patterson followed the fourth-down conversion with a 51-yard bomb to wide receiver Nico Collins, and running back Zach Charbonnet finished off the drive two plays later with an 8-yard touchdown run. The fake punt had kickstarted Michigan’s offense, who looked listless despite holding a lead.

In a game where a few early mistakes were all that separated a blowout from an intriguing matchup, Barrett’s 14-yard rumble prodded the Wolverines toward a 38-7 win and turned Maryland Stadium into Ann Arbor of the Southeast by the start of the fourth quarter.

“That fake punt, we needed it pretty badly,” Michigan linebacker Josh Uche said. “It kind of killed their momentum and killed their spirits.”

If not for Giles Jackson’s 97-yard return touchdown on the opening kickoff, finding a seam and sprinting down the sideline untouched, Michigan (7-2, 4-2 Big Ten) and Maryland (3-6, 1-5) would have been tighter early. By the end of the first quarter, the Terps had gained nine more yards than the Wolverines.

Still, coach Jim Harbaugh’s squad turned a short field following Maryland’s first-drive three-and-out — which included a backward pass and a sack — into an 11-play, 41-yard drive, running the ball eight times and capping the possession off with a two-score lead.

“We don’t want to look up and worry about the score, or worry about the culmination of it until zero’s on the clock,” coach Mike Locksley said. “That’s where I saw us make strides as a team today, and that’s how you’ve got to play.”

In the buildup to Saturday’s homecoming matchup, Locksley said stopping the run would be his defense’s main focus. That unit did an admirable job against a team that posted 303 yards on the ground in a blowout of then-No. 8 Notre Dame last week, holding Michigan to 47 rushing yards at halftime.

But after two straight three-and-outs, the fake punt avoided a quick end to another drive and set up Charbonnet’s second rushing touchdown of the game — and his 11th touchdown of the campaign, a school record for a freshman.

“I had a feeling it was coming,” running back Javon Leake said, who was on the field for Michigan’s fake punt. “We practiced it, but it was just good on Michigan for executing and just getting the first down.”

Meanwhile, Maryland had its opportunities. Nine rushing attempts from Leake and running back Anthony McFarland and a cameo from true freshman quarterback Lance LeGendre drove the Terps to the 12-yard line in the first quarter.

But once there, quarterback Josh Jackson’s second throw of the drive fell incomplete and his third — released as he was getting drilled — fluttered out of his hand and fell into defensive back Josh Metellus’ arms for an interception.

Then, early in the second quarter, Maryland got into the red zone once more. Two plays for lost yardage in a row, though — including one of the Wolverines’ four sacks on Jackson — pushed the Terps back and forced kicker Joseph Petrino into a 37-yard field goal attempt.

He missed, another blemish on his 1-for-4 record this season. And Michigan added on two touchdowns in the third quarter, finally finding prolonged offensive production to turn a close affair into a comfortable win.

“We drove two times into the red zone and didn’t come up with any points,” said Jackson, who finished 9-for-20 with 97 yards. “We played well, we just didn’t finish drives.”

Those early chances from the Terps could have made Saturday’s contest a different game, as has been the case throughout the 2019 campaign. A play made here or there and perhaps Maryland wouldn’t be 3-6, struggling to tread water in the Big Ten.

But here they are, in Locksley’s first season as full-time head coach, on the outside looking in at bowl eligibility. They’ll need to run the table against Ohio State, Nebraska and Michigan State to get there.

And on Saturday, the two chances in the first half that went awry displayed the growing this team still has to do before turning these games into close battles. Even without that gutsy fake-punt call in the second quarter, Michigan appeared destined to persevere past a Maryland offense that had its chances and didn’t come through.

“The whole time we were definitely feeling like we were in the game,” Leake said. “It was just a couple plays we had to make.”