Maryland quarterback Tyrrell Pigrome expected to play vs. Temple despite back spasms 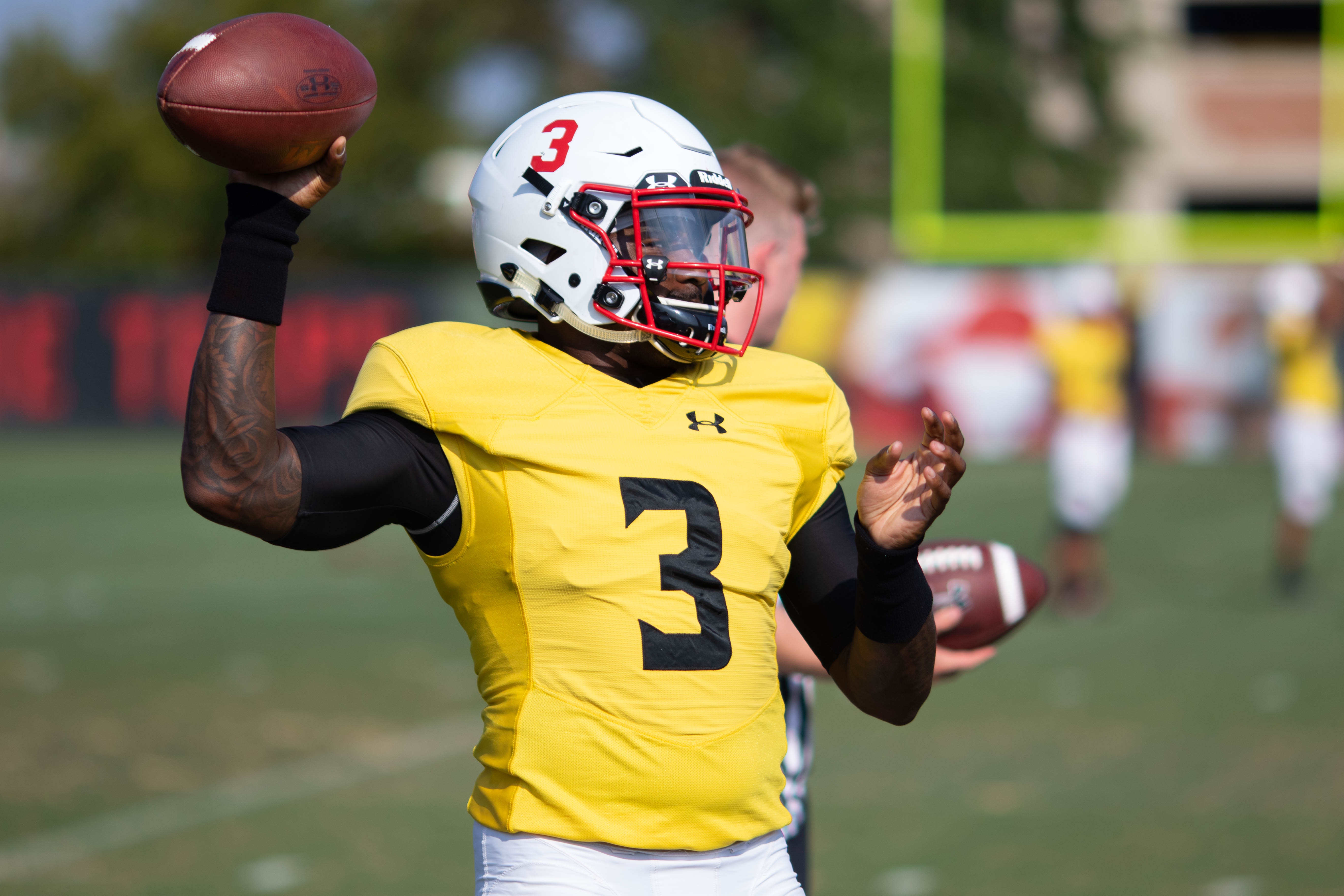 Maryland football’s backup quarterback Tyrrell Pigrome is suffering from back spasms, coach Mike Locksley said after practice Wednesday. But the head coach thinks Pigrome will be available to play Saturday against Temple.

Locksley said Pigrome’s back “locked up on him” Tuesday, and the redshirt junior didn’t participate in practice. He was late arriving to Wednesday’s practice but engaged in a few drills, although he moved gingerly.

“Right now, I think he’ll play. He came out, we just tried to get his back warm,” Locksley said. “You never know when it’s going to go away, but he practiced today some. He’s still a little tight. But my expectation is we’ll rehab him and treat it and hopefully we can get something out of him tomorrow, a little bit more than we got today. … The expectation is he’ll be available.”

Through two games — both blowout wins against Howard and Syracuse — the Terps’ new starter Josh Jackson has thrown for 541 yards and seven touchdowns with a 58.1 completion percentage.

But Pigrome has featured in both contests, however sparingly. In the season-opening 79-0 win over Howard, Pigrome entered into a game already well out of reach and completed two passes, including a 62-yard bomb to wide receiver Dontay Demus. He also had a 22-yard touchdown run.

Against Syracuse, Pigrome rushed twice for seven yards, not attempting a pass.

“He’s not just a runner,” Locksley said. “He can help us in a lot of ways. The fact that he can make plays with his feet when it breaks down adds to his ability to be a weapon, and he still has the capabilities as a thrower.”

While it was Pigrome and Josh Jackson embroiled in the tightest quarterback competition this summer, Locksley said throughout fall camp that DeSue had impressed. And at the spring game in April — without either Jackson or Pigrome playing — the redshirt freshman completed 23-of-35 passes for 218 yards and two touchdowns.

Ahead of Maryland’s season opener, Locksley expressed confidence in his quarterback room — and not just in his starter. He shouldn’t have to worry about who’s under center, though, with Jackson healthy and effective through two games.

“I feel real comfortable with where the quarterback room is as a whole,” Locksley said Aug. 27, “probably better than any other time I’ve been here at Maryland, the depth that we’ve created, and we feel we can win with both Josh and Piggy.”

Locksley pointed out Wednesday how he used a two-quarterback system at Alabama last year as offensive coordinator, with Tua Tagovailoa and Jalen Hurts combining for 4,731 passing yards. So while Jackson will likely continue to receive the lion’s share of opportunities, Pigrome can offer a change of pace under center for the Terps, too.

“If you’re a playmaker, we’ve got to find ways to get you on the field and find a way to create a competitive advantage,” Locksley said. “Piggy’s development as a thrower has put him in a position to help us.”

In other injury news, Locksley said linebacker Shaq Smith is expected to be healthy for Saturday’s matchup in Philadelphia. The graduate transfer was a game-time decision last week but missed out through a groin injury.

On Tuesday, Locksley said offensive lineman Marcus Minor was expected to play Saturday, too, after being “nicked up.” However, wide receiver Sean Nelson is doubtful with a high ankle sprain. The redshirt sophomore pulled in his first career touchdown catch against Howard.