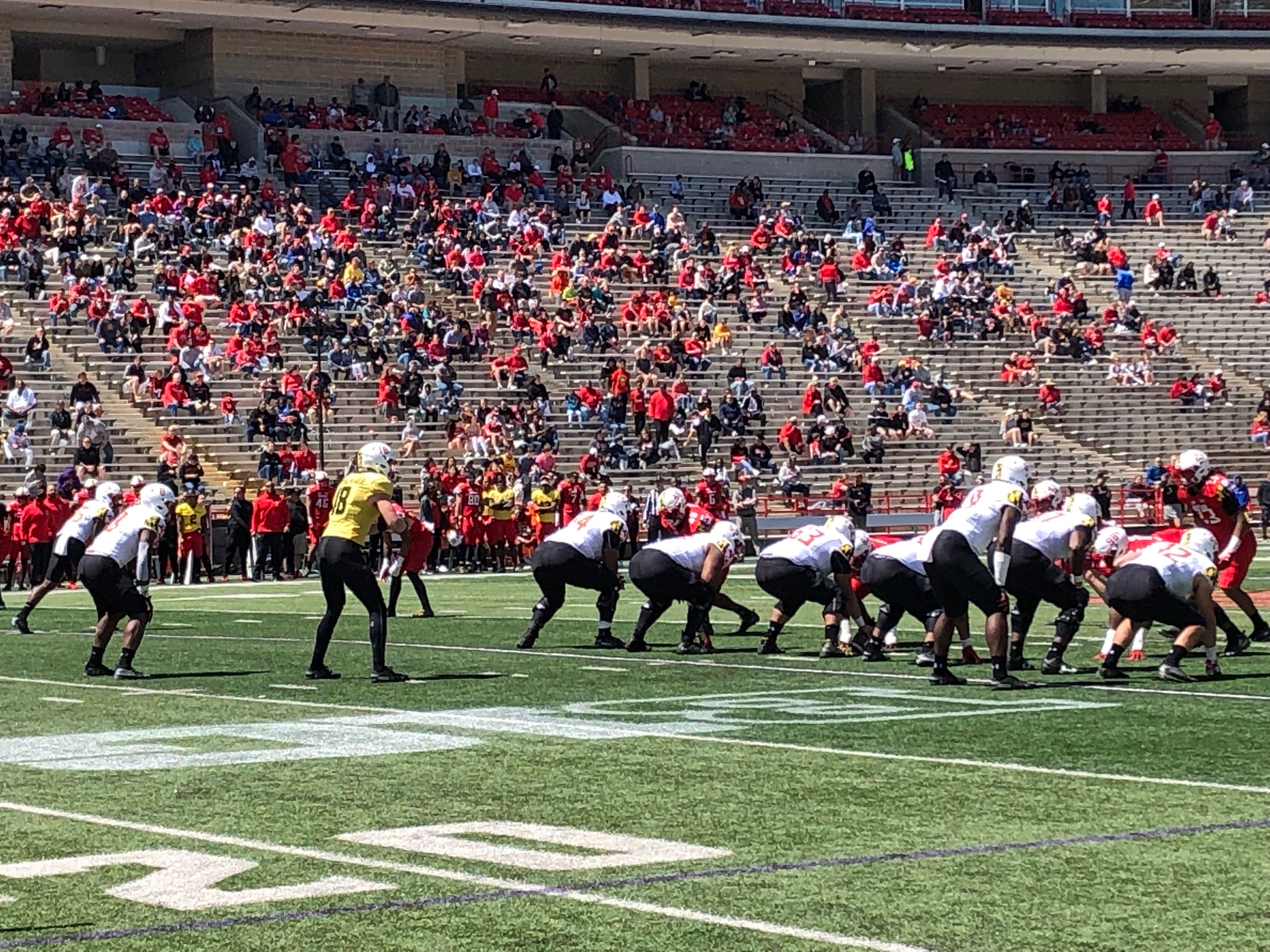 After splitting teams into what essentially looked like starting offense (Team Red) and starting defense (Team White), Red pulled away for a 28-17 win at Maryland football’s spring game, wrapping up Mike Locksley’s first spring as head coach of the Terps.

As he stood in the center of the field — which he called the “best view in the house” and allows him to yell instructions to his quarterbacks more easily — he watched the first signs of his offensive scheme take shape.

But without incoming transfer Josh Jackson, four-star recruit Lance LeGendre or Tyrrell Pigrome under center, it’s hard to get a real look at how Maryland may attack Howard on Aug. 31.

Pigrome, who finished the season as the Terps’ starter following Kasim Hill’s ACL injury, tweaked his knee during last week’s scrimmage and was held out as a precaution. An MRI came back negative for any damage.

Still, Maryland’s bevy of skill-position players were on display against themselves in Saturday’s contest.

“Today is a byproduct of them getting more and more comfortable with the system,” Locksley said.

Here are three takeaways from the game:

Running backs are still the strength

Midway through the 2018 season, running back Anthony McFarland issued an impressive proclamation: “We honestly do have the best group in the country.”

Ty Johnson graduated and Lorenzo Harrison is still working back from a right knee injury that ended his season last year. But the running back room looks to be as talented as ever.

“There’s like six of us, and we’re all freaking really good,” Javon Leake said. “Coming to practice everyday, you just got to remember that everybody in the room’s good, so you’ve just got to show up with your A game.”

McFarland broke out for a 34-yard touchdown run on the red team’s first possession, and he averaged 6.3 yards per carry en route to 57 total yards.

Leake, who Locksley said earlier in the spring was a strong one-two punch with McFarland, found the edge early in the second quarter and dove to the pylon for a score. A few plays earlier, he made a defender miss in the open field and scampered forward for a 16-yard gain. And Tayon Fleet-Davis rushed for 42 yards.

With the wind whipping at Maryland Stadium, Locksley was worried the throwing game would be limited. Without Jackson or Pigrome, Tyler DeSue and Max Bortenschlager battled it out instead.

Both quarterbacks completed over 61 percent of their passes, though, producing enough through the air to avoid overworking his backs, particularly McFarland and Leake, who may well still be the stars in his offense come August.

Tight ends get some love

On Saturday, three different tight ends caught touchdown passes, and Okonkwo reeled in seven passes and two touchdowns himself. For Locksley, who coached second-round selection Irv Smith at Alabama, tight ends have long been an integral part of his playbook. And he expects that to continue with the Terps.

“They’re the guys that create matchup issues,” Locksley said. “We’re going to play and use all of our weapons in this offense.”

Okonkwo, whose 6-foot-2, 235-pound frame compares similarly to Smith’s, could become particularly difficult for defenses to cover. He can line up outside as a wide receiver or come inside as an in-line tight end or even catch passes out of the backfield.

He rated his run blocking a five out of 10 (“That’s my weakness,” Okonkwo said, “I have to get better.”), but feels his hands are a 10. He caught a four-yard pass from Bortenschlager in the second quarter for a score and added a 16-yard touchdown late in the third, finishing with 63 yards.

“I can do everything, I think,” Okonkwo said. “I feel like I can be a big game-changer this year.”

DeSue found tight end Michael Cornwell for a seven-yard touchdown in the fourth, one of five passes Cornwell pulled in. DeSue also hit tight end Robert Schwob for a 23-yard score in the third.

But Okonkwo, who scored three rushing touchdowns as a freshman, could be the main target from the group.

“He’s a tight end who can move like a receiver,” DeSue said. “He creates all sorts of matchup issues.”

Following Locksley’s first spring game, the public address announcer introduced a series of awards. And after linebacker Tre Watson graduated and with Isaiah Davis recovering from an offseason shoulder surgery, Ayinde Eley was given the EJ Henderson Linebacker Award for his work during the spring.

The sophomore racked up eight tackles during Saturday’s game, tied for a game-high, after posting 13 tackles as a freshman.

“Ayinde has really stepped up this spring,” Locksley said. “He has good length and has the ability to play the run. I feel like he’s taken that next step and will build on it this summer.”

The Terps defense lost half their starters from last season, so there are plenty of spots open for up-and-comers. Early in the spring game, Team White allowed big plays to Team Red, including a 27-yard completion to wide receiver DJ Turner and McFarland’s 34-yard touchdown run.

That irked Locksley, but he felt that unit came together better later in the game. Eley was one of the difference makers.

“We hope to see him play that way once we start the season,” Locksley said.