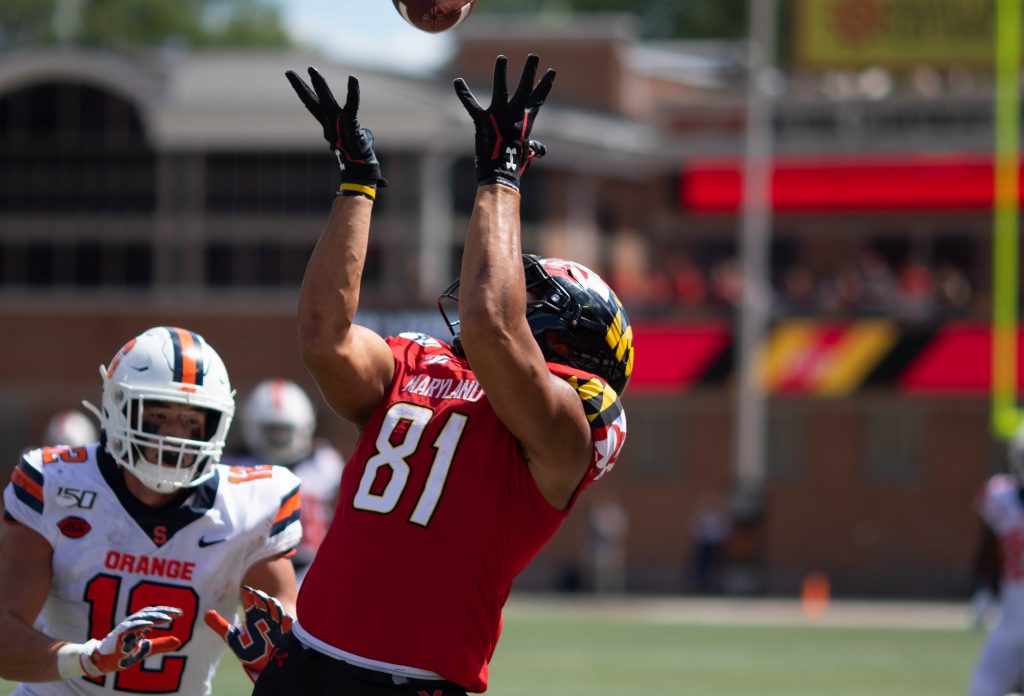 Tight end Tyler Mabry reaches up to pull down a pass during Maryland football's 63-20 win over No. 21 Syracuse on Sept. 7, 2019, at Maryland Stadium. (Julia Nikhinson/The Diamondback)

Tyler Mabry crouched just off the line of scrimmage Saturday on Maryland football’s first drive, one of four receivers in a tight bunch formation against a zone defensive scheme. As Syracuse brought six players on a blitz, the tight end cut right into the flat, offering quarterback Josh Jackson an easy dump-off pass to avoid the pass rush.

Mabry reeled it in, turned upfield and trotted into the Terps’ end zone for the second time in as many weeks — putting the first points on the board in what would rapidly evolve into another blowout win to open the season.

In an offense that has posted 20 touchdowns combined in the past two weeks, there are ample weapons to lean on in the country’s highest-scoring unit; four running backs found the end zone Saturday, Jackson threw for 296 yards and Maryland’s pass-blocking unit has surrendered just one sack through two games.

But it’s the tight end production that’s emerged as the biggest difference between offensive coordinator Scottie Montgomery’s play-calling and that of past years, featuring prominently in an improved Terps passing game.

Mabry’s score in the 63-20 win over the Orange made him the first tight end for Maryland to catch a touchdown pass in consecutive matchups since 2008. He and tight end Chigoziem Okonkwo have combined for three touchdown catches this season — the most from the position since 2015, when Avery Edwards snagged three.

At the Terps’ spring game four months earlier, all four touchdown passes were reeled in by tight ends. And while that was before Mabry, a graduate transfer from Buffalo, had even arrived on campus, it gave an early indication that coach Mike Locksley would involve his big targets come the regular season.

“Maybe call Irv Smith from Alabama and ask him if we threw to tight ends,” Locksley said of the former Crimson Tide tight end. Smith broke out for 710 receiving yards and seven touchdowns in 2018 with Locksley as offensive coordinator, and went on to be selected by the Minnesota Vikings in the second round of the 2019 NFL draft.

Okonkwo and Mabry both saw that production from Smith, too. It gave the 6-foot-2 Okonkwo confidence his role would increase in 2019 and helped convince Mabry that playing for Locksley at Maryland would be the best fit.

“I watch all [Smith’s] film. I watch everything because we’re very similar players,” Okonkwo said in April after the spring game. “That’s one thing I really loved when I saw [Alabama’s] tight ends last year, I was like, ‘Oh, this guy is just like me. I can do everything that he’s doing in this offense.’”

Early in the 2019 campaign, though, tight ends have featured much more heavily as pass-catchers. It’s a possible byproduct of Jackson, who allows the Terps to drop back and pass with more confidence.

“They still do a great job blocking, but that just opens up the passing game. We got Tyler, he’s a great tight end. We got Chig, we got Noah [Barnes],” running back Javon Leake said. “We got a bunch of tight ends that can catch and block, so we spread them out a little bit and let them work with the linebackers.”

Through two games, Okonkwo and Mabry have combined for 10 catches for 100 yards. The duo offers Maryland’s offense something it hasn’t had in years: tight end targets who can create mismatches in pass coverage as well as block for the Terps’ potent run game.

So, based on the early contributions from Okonkwo and Mabry, the 6-foot-4 graduate transfer believes the tight end grouping in College Park could post something similar to the eye-popping numbers T.J. Hockenson and Noah Fant put up last year with Iowa. Those two combined for over 1,000 receiving yards and wound up being drafted.

“They can’t cover Chig, they can’t handle my blocks; it’s like them Iowa tight ends last year,” Mabry said. “I feel like we’re going to be something special, me and him.”