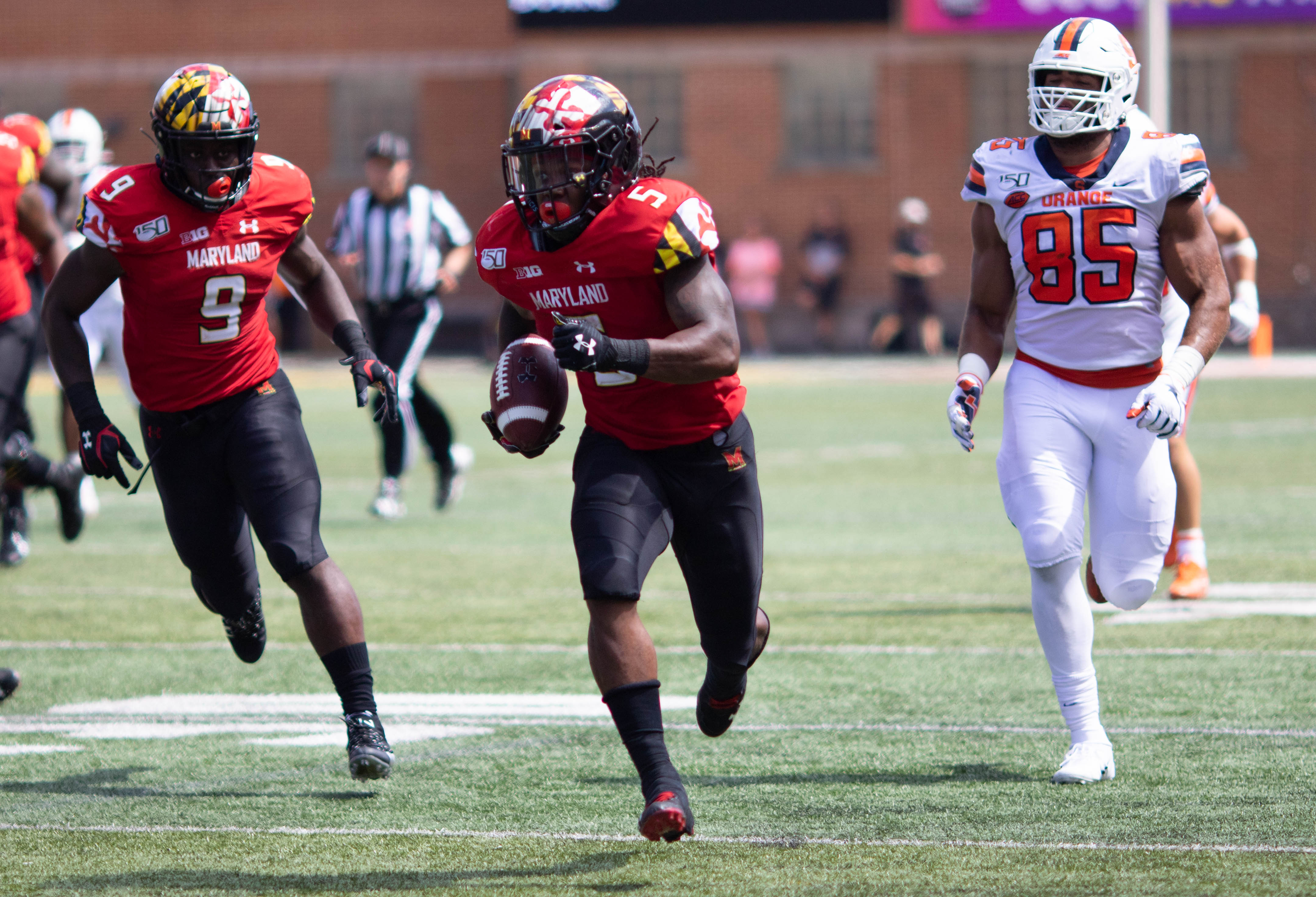 Running back Anthony McFarland streaks past the Syracuse defense in Maryland football's 63-20 on Sept. 7, 2019 at Maryland Stadium. (Julia Nikhinson/The Diamondback)

As last week’s 79-0 scoreline against Howard grabbed the attention of the college football world, it also left plenty of questions for coach Mike Locksley and Maryland football to answer in Week 2.

The Terps pummeled the Bison, an FCS opponent, putting an asterisk on many of their inflated statlines. Either way, quarterback Josh Jackson shined in his debut, and Maryland hardly needed to unleash running back Anthony McFarland.

So when No. 21 Syracuse came to College Park, boasting a defense that had also pitched a shutout in its opener, onlookers — Locksley among them — awaited to see if the dismantling of Howard was a fluke or a foreshadowing of more impressive victories down the stretch.

The latter seemed true Saturday, with another blowout victory — this one 63-20 over a ranked Syracuse squad at Maryland Stadium — that validated Maryland football’s Week 1 onslaught. From Jackson’s first throw producing a big gain to a stifling defense that forced two takeaways, the Terps picked up where they left off.

“The first game is kind of a first impression,” Jackson said, “and now you just build your reputation.”

After Jackson’s first throw of the day went for 40 yards, he followed it with a 16-yard completion to wideout Carlos Carriere. The gunslinger’s next attempt found tight end Tyler Mabry for a seven-yard score, the first of six touchdowns on seven first-half drives.

And while it was Syracuse (1-1) that came in as the ranked opponent, it’s Maryland (2-0) that appears worthy of a wider national discussion — at least through two weeks of nonconference play before visits to the Big Ten bluebloods begin.

“Maryland is not the same Maryland,” running back Javon Leake said. “We’re a good team, it’s going to be hard to beat us, and we’ve just got to keep this momentum going.”

That first drive took the Terps five plays and 1:37 to go 67 yards, pushing the pace early and often. The second drive took just over two minutes, a forced fumble offering a short field that McFarland turned into a three-yard score.

[Read more: Maryland football’s Shaq Smith felt like a natural as the team’s outside linebacker]

“Well, this is definitely humble pie,” Syracuse coach Dino Babers said. “I don’t know what it tastes like, but it probably tastes like exactly the way I feel right now.”

Unlike last week, when most of the offensive starters were out by the end of the first half, offensive coordinator Scottie Montgomery fed McFarland and Leake with more regularity. McFarland rushed for 75 yards, adding 45 yards through the air and three total touchdowns. And Leake posted 107 yards, including a breakaway 64-yard score on the first possession of the second half.

Four running backs found the endzone and compiled over 50 yards for the Terps, again showing off the depth at the position.

But it was Jackson’s performance, particularly early, that set the tone Saturday. He doled out dimes and took a draw up the middle for a 14-yard gain and first down on the third possession of the first quarter. He finished 21-for-38 with 296 yards, three touchdowns and an interception.

“One thing about Josh since day one that’s stood out to me [is he’s] always been a leader,” McFarland said. “He’s a leader of the offense. He has control of the offense. He knows what everybody’s doing. When you got a quarterback like that, the sky’s the limit.”

And after pressure flushed Syracuse quarterback Tommy DeVito out of the pocket midway through the second quarter, Maryland was gifted another short field. Linebacker Jordan Mosley intercepted a hopeless pass, and two plays later McFarland made one cut upfield and split the Orange defense for a 20-yard score.

It was all part of a 42-point first half, Maryland’s highest-scoring half against a ranked opponent since 1984. And with another overwhelming first-half performance, Syracuse was well out of reach come the final 30 minutes of football.

Even with Jackson’s first interception — granting the Orange the ball at the Terps’ 26-yard line — Maryland’s defense forced the first of three turnovers on downs.

“Our defense gave us two early stops and then a turnover, which allowed us to put points on the board,” Locksley said. “And then to finish the game the way our defense finished it in the fourth quarter was good to see.”

So despite entering Saturday’s contest with unknowns abound, Maryland left it knowing its season-opening evisceration was no fluke. Between Jackson’s arm, a bevy of running back options and a ball-hawking defense, there might be something brewing in College Park. At least until Big Ten play begins.

“We’ve got to do it next week, and the week after that,” Leake said. “We can’t stay stuck on this game.”