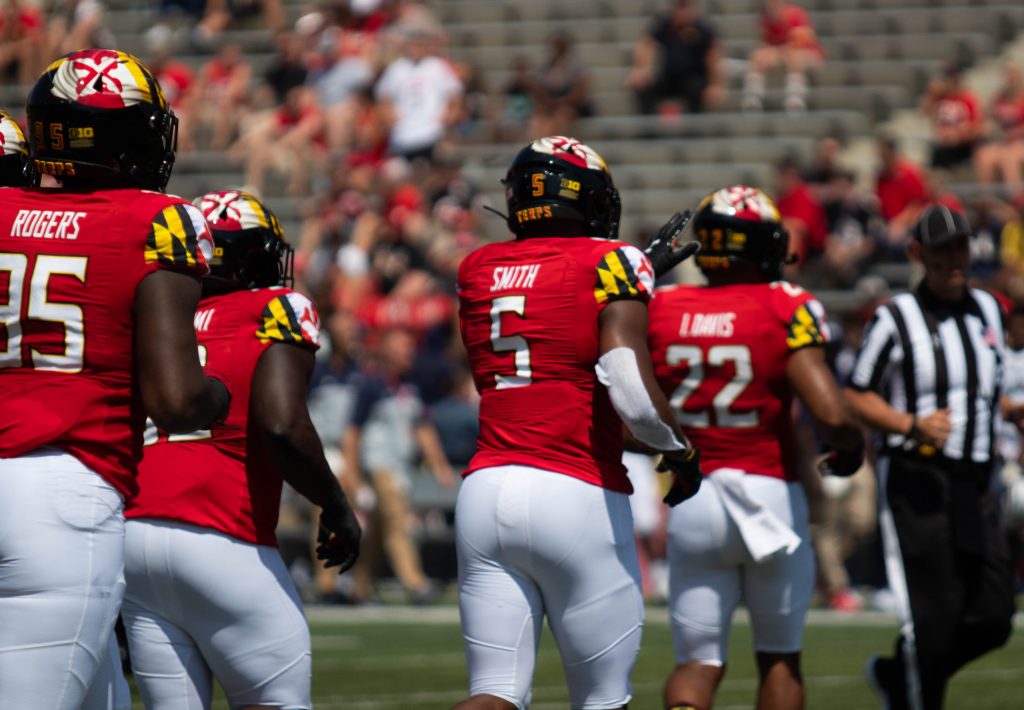 As Howard quarterback Caylin Newton rolled out to the left during the second quarter of what became a 79-0 demolition Saturday, Shaq Smith bull-rushed the tight end attempting to block him.

Smith, a graduate transfer linebacker for Maryland football, shoved his way into the backfield. And when Newton realized the 6-foot-2 Baltimore native was bearing down on him, the MEAC Preseason Player of the Year scrambled, attempting to avoid another crushing.

But Smith lunged forward and dragged Newton down, dropping the Howard gunslinger for a one-yard loss. For Smith, newly transitioning to the Jack linebacker position, the sack symbolized a payoff for the work he had put in until that point.

As an outside linebacker for the first time since his freshman year of high school, Smith’s main focus is to set the edge, redirecting running backs up the middle and holding a mobile quarterback like Newton in the pocket. So while he finished with one sack and two other tackles, coach Mike Locksley credited him with much more.

“We ask him to be really strong against the run, set the edge against tight ends. It’s not necessarily a glamorous position,” Locksley said. “We finished with eight sacks, and I know he played a role in pushing the pocket from the edge and containing an explosive playmaker.”

Smith transferred from Clemson this offseason, where he tallied 30 tackles in two seasons as an inside linebacker. He featured mostly on special teams in 2017 and was expected to see a further increase in defensive snaps this season with the Tigers after starting linebackers Tre Lamar and Kendall Joseph turned pro.

Instead, Smith entered the transfer portal and wound up with the Terps. As Locksley pitched him on joining his project in College Park, it became clear the new head coach thought a move to outside linebacker could better suit Smith’s skillset. The former four-star recruit agreed.

“You could make a lot of plays in that position,” Smith remembers Locksley telling him.

Early in his Maryland career — albeit against an FCS opponent — Smith showed he could be a valuable contributor at outside linebacker, playing a hybrid between a defensive lineman and traditional linebacker. In defensive coordinator Jon Hoke’s 3-4 defense, Smith’s role is vital.

He added two tackles apart from the sack, holding Howard to short gains on the ground. His contributions were felt in other ways, too. At the end of the first quarter, it was Smith’s rush off the left side that collapsed the Bison pocket, forcing Newton to step up into defensive lineman Brandon Gaddy’s waiting arms.

“We thought he played very physical at the point of attack,” Locksley said. “He’s a big speed-to-power pass rush type of guy, and we were able to get some hits on the quarterback.”

So after one week, Smith holds that reverting to his former position was the correct decision. While the defensive matchups will only get tougher from here — No. 21 Syracuse enters Maryland Stadium on Saturday as the next test — Smith’s ability to handle his new role can prove pivotal in the Terps’ chances of limiting playmaking quarterbacks and defending against the run.

He feels up to the challenge.

“Natural. That was the first thing that came to mind, you know? It was very natural,” Smith said. “It’s definitely a lot to learn, a lot to improve on, but just in that first game, the biggest thing I took away is that I thought I had a natural instinct for that position, a natural feel for it.”