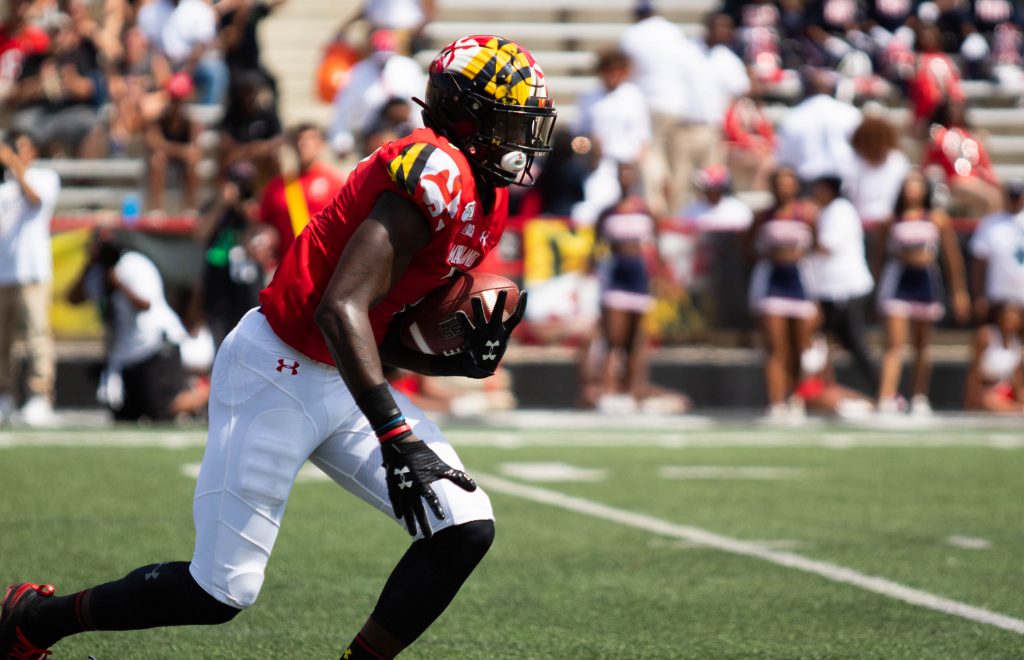 When Josh Jackson was asked what stood out about Dontay Demus Jr.’s performance following Saturday’s 79-0 obliteration of Howard, the Maryland quarterback quickly recounted the wideout’s statline.

“I think he had 3 for 100,” Jackson said. Two of those catches went for touchdowns, including a 62-yard fleet-footed race to the endzone and another featuring a nifty catch on a ball thrown behind him. Then Jackson laughed, perhaps thinking of the budding rapport between the pair, and all the future passes that may go Demus’ way.

After wide receiver Jeshaun Jones tore his ACL during fall camp, uncertainty entered the unproven wide receiver room. DJ Turner, the lone senior in the mix, is the only returning wideout to have caught a touchdown pass last season. Saturday, though, offered a glimpse of the depth at the position, even if many players still lack game experience.

Demus stood out from the group, flashing a combination of size and speed that Howard had no answers for, particularly in man-to-man coverage. As the competition for Maryland heightens from here on out, the 6-foot-3, 200-pound sophomore made a case in the season opener to be a vital cog in the hunt toward bowl eligibility.

“Dontay is a big, long, fast guy … who can be a matchup problem because of his size,” coach Mike Locksley said. “I thought the quarterbacks did a good job of putting the ball up and giving him opportunities to make the plays.”

It’s still early, and success against an FCS opponent doesn’t ensure results against the Big Ten’s bluebloods, but the Terps’ ability to throw under pressure was a positive sign. Locksley opted to call more passing plays early to offset the Bisons’ blitzes. Maryland’s quarterbacks attempted 30 passes — nine more than any game last season — and their 306 passing yards are the most since 2014.

Early in the first quarter, Jackson stood back in an empty-set formation. Howard stacked six defenders in the box and brought them all in pressure, leaving the Terps’ five receivers in single coverage. While Jackson was hit hard by a free rusher, he got the ball near Demus — albeit behind him — on a slant route.

Demus reeled it in. And in a Cover 0 system, Howard had no help over the top. Once Demus broke his defender’s tackle, he trotted into the endzone for Maryland’s first points of 2019.

“Put it where you want to, I’m gonna go get it,” Demus said with a laugh.

Later, with Tyrrell Pigrome under center, Demus lined up wide left. While there was help from the safety, the defender broke late on Demus’ fly route — the wideout had already left his defender in the dust. Pigrome lofted a ball down the left sideline for a 62-yard score, easily dissecting the Bisons’ man-to-man coverage once more.

“To me, I feel like it’s disrespectful,” Demus said. “Just with my size and my speed, you’re playing me one-on-one, you’re going to get beat.”

[Read more: “Like night and day”: With coach Mike Locksley, Maryland football has grown off the field]

Jackson is already well aware of Demus’ most noticeable characteristics. On Maryland’s fourth drive, Jackson was faced with more pressure. Once again, he stood tall despite a defender bearing down on him, lofting a ball into single coverage toward the corner of the endzone.

Against Howard’s Jalen Smith, a 6-foot defensive back, Jackson figured Demus might have the advantage. But a slightly underthrown ball led to Smith colliding with Demus as the receiver came back for it, resulting in defensive pass interference and a first-and-goal that running back Anthony McFarland converted into a two-yard touchdown moments later.

Demus figures to get plenty more shots this season, along with Brian Cobbs and Darryl Jones, after racking up a game-high three catches on a team-high five targets.

Demus’ season-opening 100-yard game came against Howard, dulling some of the luster of his statline. But for a program that’s hardly been a passing threat in past years, the Week 1 commitment — and results — through the air are promising.

“A lot of people not expecting me to be as fast as I am because of my size,” Demus said. “But that’s what I need to go out there and show.”