“Like night and day”: With coach Mike Locksley, Maryland football has grown off the field 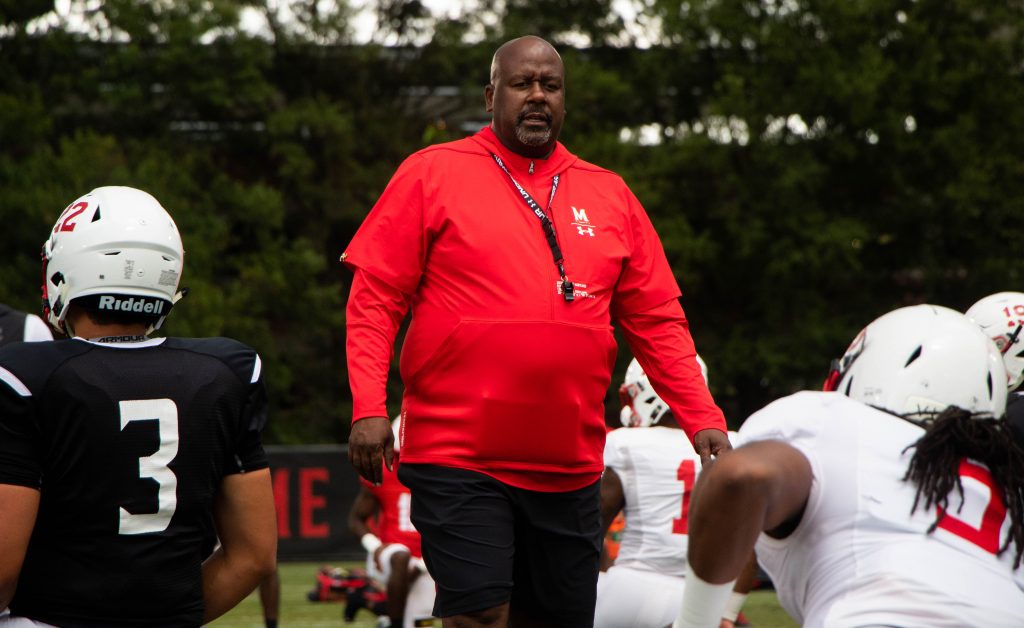 The Maryland football team has a lot to learn.

It’s not as easy as blasting music and jumping around. There are tactics here, strategy involved. Being one-dimensional has its flaws — so coach Mike Locksley means to show his squad how it’s done.

“Karaoke was kind of awful,” Locksley said Tuesday. “We need to teach them that karaoke isn’t: Go to YouTube and pull up a rap song that no one knows the words to.”

But last week’s karaoke night, despite being a work in progress, was part of a larger offseason focus on building a connection off the field. In a sport so focused on winning, in a conference offering a slim margin for error, Locksley has made it a point to balance on-field progress with off-field bonding since arriving in College Park.

After the tragedy and turmoil the Terps went through last year — offensive lineman Jordan McNair died June 13 from heatstroke he suffered two weeks earlier at a team workout; coach DJ Durkin was placed on leave about three weeks before the season opener, then reinstated and promptly fired midway through the campaign — there’s good reason to concentrate on more than just mastering Locksley’s playbook.

Locksley, who was hired in December to help right a listing ship, can understand what his players went through, though he was just looking on from Alabama. As he leaves his mark on this program, he aims to have a well-rounded experience full of karaoke, BBQs at his house, guest speakers and movie outings — as well as wins.

“Those events were meant to develop a bond and a chemistry that will sustain us,” Locksley said. “We’ll face some adversity. We’re a work in progress as a program. Year one is to set the foundation, so the tighter knit we are as a team when bad things happen, we’ll gel and bond together and move forward the right way.”

After practice last week, wide receiver Brian Cobbs thought back to the buildup to the 2018 season opener against Texas, and how much it differed from this summer’s experience. He remembered the helicopters circling overhead during practice, the national media outlets suddenly paying attention to a program that hadn’t been relevant on a large scale for years and the anguish over losing a teammate.

It was a lot for a freshman to handle.

“Last year, it was all eyes on us,” Cobbs said.

Now in his second season, Cobbs credits the job Locksley has done this offseason to create what has been coined as more of a family atmosphere. Locksley began advertising that idea since his introductory press conference Dec. 6, 2018. The players are noticing it take shape.

“We kind of started new. We hit the refresh button,” Cobbs said.

“If you look at the camp from this year, the progression from last year, it’s like night and day,” wide receiver Darryl Jones said.

“It was definitely easier to just focus on football, because there were no distractions,” cornerback Tino Ellis said.

Locksley, a Washington, D.C., native, has been around football in this area for a long time, including two prior stints with Maryland. Cornerback Marcus Lewis met him in 2013. Ellis and running back Anthony McFarland began forming bonds with the coach in middle school. That preexisting connection undoubtedly helped the new coaching staff get players on board.

But it goes beyond that.

In 2017, Locksley’s son Meiko was fatally shot in Columbia, Maryland. And when McNair died in 2018, Locksley kept close tabs on his former team and how they dealt with tragedy. He also stayed in contact with the McNairs, a family he met through McDonogh School. McNair, a player Locksley had once recruited, attended school there with Locksley’s daughter, Kori.

“He’s been through adversity just like us,” McFarland said. “When you have a coach like that, and he shows you the family side of things and how much he cares for players, that’s a lot for me to play for on Saturday. He’s been bringing nothing but love into this program.”

Last week’s karaoke session, featuring Brandon Gaddy and Breyon Gaddy commanding the stage and a mosh pit-like atmosphere in the crowd, was a part of Locksley’s mission — even if the new head coach wasn’t impressed by his team’s singing ability.