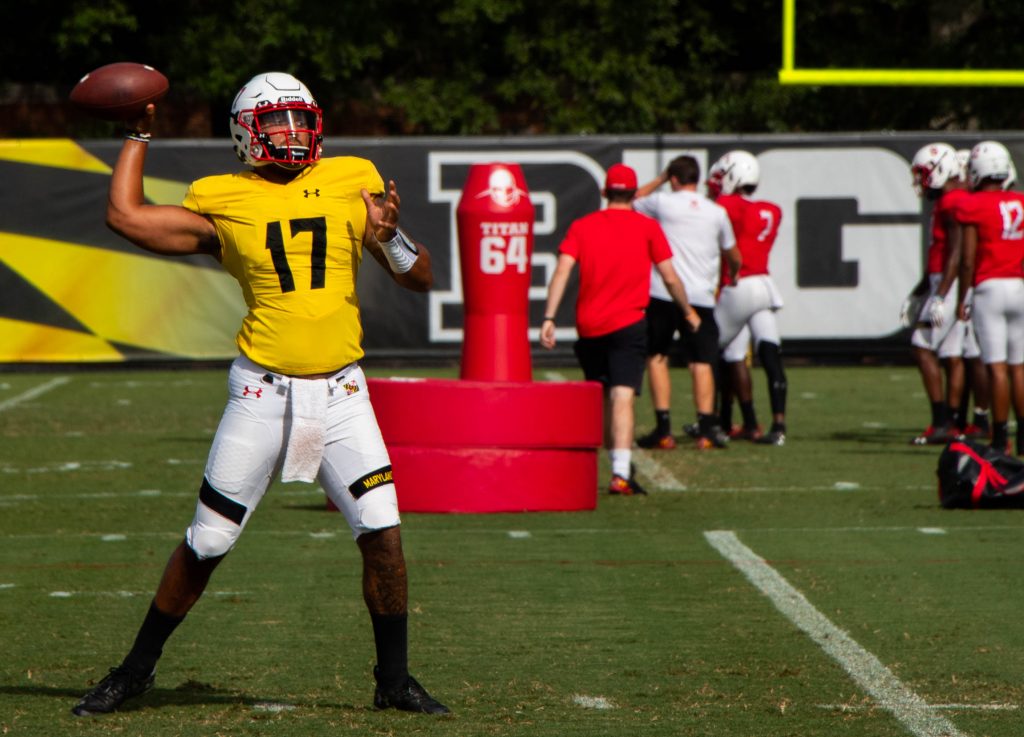 Josh Jackson wasn’t aware of the uninspiring history under center in College Park until fall camp, when a Maryland football trainer made small talk as the Terps’ new quarterback got ice.

Sure, there was Boomer Esiason, Scott Milanovich and Shaun Hill. But those gunslingers are decades past their prime at Maryland Stadium, before Jackson and most of his Maryland teammates would have watched — and digested — the action on the field. Since the beginning of the 2016 season, five different quarterbacks have started games for the Terps due to a variety of maladies.

“That’s a little disheartening, I guess you could say,” Jackson admitted Tuesday, three days after he’d learned from coach Mike Locksley that he’d be the next starting signal-caller. “That wasn’t in the official visit transcript.”

Be that as it may, whatever miasma seems to surround Maryland quarterbacks — most recently seen through Tyrrell Pigrome and Kasim Hill tearing ACLs in the last two seasons, or earlier with four quarterbacks falling to injuries in 2012 — Jackson brushed off any concern over the shaky past.

He said he’s not superstitious, and despite a broken leg prematurely ending his 2018 campaign, Jackson’s success at Virginia Tech offers hope that the graduate transfer might be the long-awaited answer under center for the Terps.

“I’m not trying to focus on the past or anything,” Jackson said. “I’ve worked all spring and all summer to earn that job, and I think I can bring leadership, and just hopefully be the best quarterback I can for this team.”

On Sunday, after Locksley had come to a decision following a fall camp competition that grew tighter than he expected, the new head coach brought Jackson and Pigrome into his office. Throughout camp, the coaching staff had been keeping tabs on who fit best in Locksley’s offense; who converted third downs at the highest rate; and who set up the team to score the most points.

In the end, Jackson prevailed. And while his history with the Hokies isn’t what secured Jackson the job — he threw for 2,991 yards and 20 touchdowns in 2017 — Locksley figured that experience helped edge out Pigrome.

“You see the maturity that he has, having led an offense before,” Locksley said.

But this is Maryland, and contingency plans at quarterback — such as linebacker Shawn Petty taking the reins in 2012 — are always prudent. Pigrome’s camp performance, while not enough to outdo Jackson, convinced Locksley of his capability to contribute, too.

[Read more: As Kasim Hill departs, Maryland football fans are left wondering what could have been]

Pigrome will have a role in Locksley’s offense, albeit one that’s set week-to-week based on matchups.

“I feel real comfortable with where the quarterback room is as a whole, probably better than any other time I’ve been here at Maryland,” Locksley said, who’s in his third stint in College Park. “We feel we can win with both Josh and Piggy.”

Jackson will get the nod in Week 1 against Howard, though, in a scheme he said will feature fewer designed runs than he had at Virginia Tech. With the Hokies in 2017, he added 324 yards and six touchdowns on the ground to go along with his nearly 3,000 yards through the air — the latter a total no Maryland quarterback has reached since 1993.

Locksley said Tuesday that Jackson won’t need to look over his shoulder, perhaps providing a sense of stability in what has otherwise been a hectic transition at Maryland. As Jackson finished his degree in Blacksburg, delaying his arrival with the Terps, he needed to catch up during fall camp.

He’s more than up to speed now, but the real competition is just around the corner against Howard on Saturday.

“They believe in me, so that’s nice,” Jackson said. “It doesn’t mean I can’t go out there and get pulled. Like, you’ve gotta play well, you’ve gotta make the right decisions, you’ve gotta take care of the ball.”