As Kasim Hill departs, Maryland football fans are left wondering what could have been 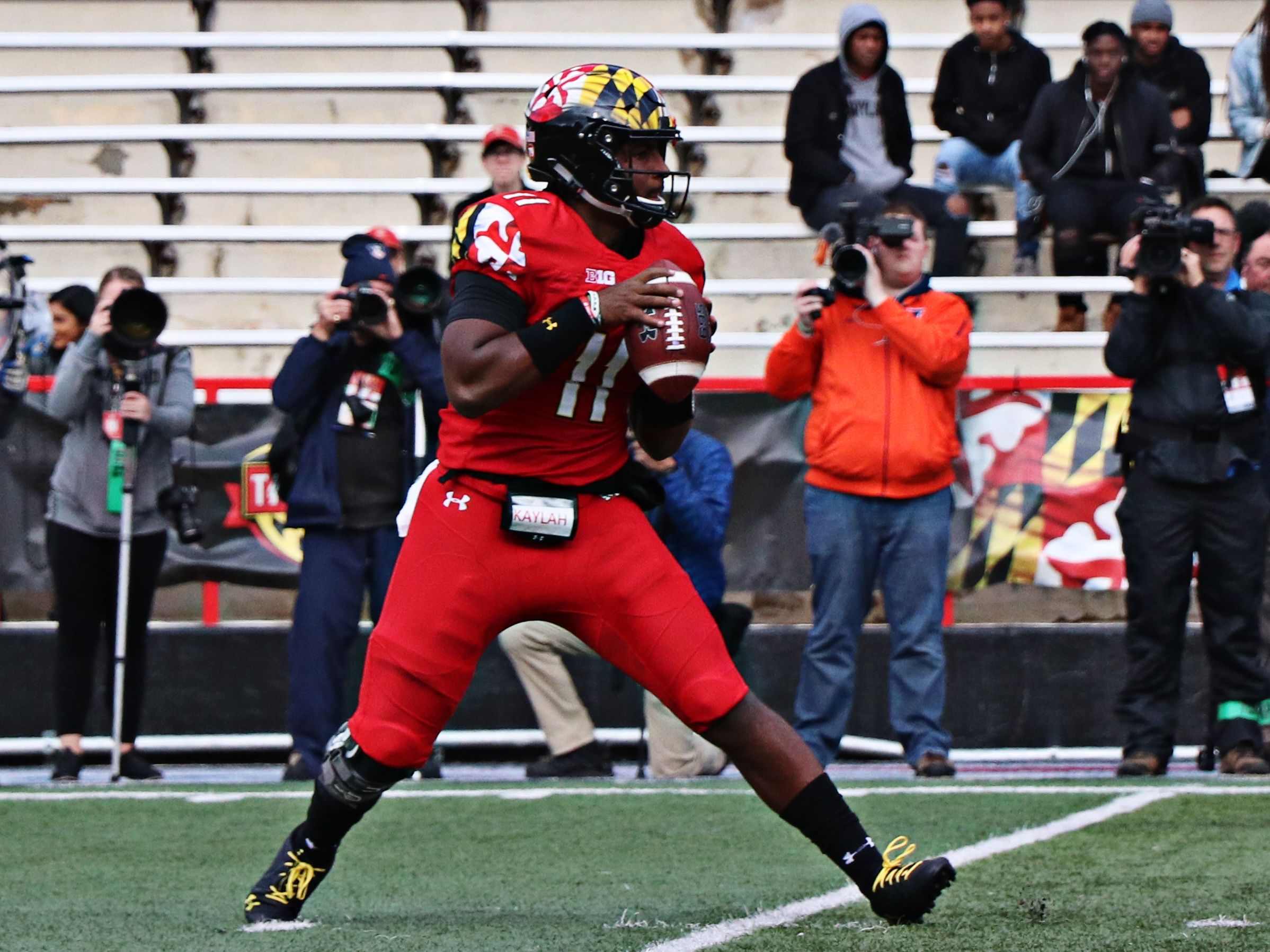 For three quarters, Kasim Hill got to be like so many other true freshman quarterbacks. He stood on the sideline watching quarterback Tyrrell Pigrome go to work, marching Maryland football to a lead against then-No. 23 Texas in the 2017 season opener.

But when Pigrome went down with an ACL injury late in that matchup with the Longhorns, Hill took the field earlier than imagined. He arrived in College Park with lofty expectations — a four-star recruit ranked as the No. 10 pro-style quarterback in his class by 247Sports — and immediately backed that up at Darrell K Royal-Texas Memorial Stadium.

Hill helped the Terps hold onto a three-point fourth-quarter lead in his first 15 minutes as a college quarterback, completing all three of his passes and rushing for a touchdown.

“There wasn’t anyone who panicked or flinched,” then-coach DJ Durkin said at the time. “No one was like, ‘Oh, no.’ Kasim came in there and just handled the moment.”

With Pigrome suddenly lost for the year, Hill was thrust into the spotlight. He made good on it, following up his first performance with 136 yards and two touchdowns on 13-for-16 passing in the following week against Towson. Then came Central Florida.

“What a shame,” said Rich Novak, former Terps quarterback from 1959 to 1961 and member of the Champions Club — a group of high-level Maryland football boosters. “What a shame.”

One hit — a spin, a swarm of defenders, a twist of the knee — took Hill from Terps fans after only 21 passing attempts in 2017. And as promising as those fleeting moments were, they proved to be Roman candles. Hill’s Maryland career burned in bright bursts. But it didn’t burn long.

The St. John’s College High School product spent this offseason recovering from yet another ACL injury, derailing what had seemed to be the early makings of a standout career at Maryland. And after entering the NCAA transfer portal in February, Hill joined Tennessee on Thursday.

Hill will face another quarterback battle there once he’s healed and eligible to play. But high-level Maryland football boosters who got to know Hill during his two seasons in College Park look back at those campaigns and think, “What if?” They hope the injuries are behind Hill so he can realize his full potential with the Volunteers.

“He was a terrific quarterback,” Novak said. “Can you imagine two ACL injuries?”

Hill’s freak injuries came with lengthy recovery processes. But he returned in 2018 from his first setback, won the starting job and threw for 222 yards and a touchdown in the Terps’ five-point victory once again over the Longhorns.

Only, in Week 10 against Indiana, Hill had his season — and career — interrupted once more by a second torn ACL.

“He had a lot of promise, and really he was sort of the main cog in what were really the only two bright spots of the last two years, which was beating Texas twice,” said Harry Geller, a Champions Club member. “He could definitely play at that level and play at a high skill level, so it’s sad that a lot of things out of his control happened.”

When Hill signed for Maryland in 2017, he became the highest-ranked quarterback recruit for the Terps, on 247Sports’ scale, since four-star Jeremy Ricker in 2006. Ricker never appeared for Maryland before departing in 2007, though. There was Jordan Steffy, another highly touted prospect under center, but injuries limited him to just six starts between 2004 and 2008.

There was reason to believe Hill might pan out, though. Novak recalls Durkin calling Hill the “complete package” during the recruiting process. The Washington, D.C., native opened his career with 84 attempts before throwing an interception and had an impressive game against Illinois in 2018, throwing for 265 yards and three touchdowns.

His performances weren’t always clean in his redshirt freshman year, but he was still raw. Hill played only one full game in 2017 and missed most of 2018 spring camp as he recovered.

“He came in highly rated, and sometimes that’s all bunk,” Bob Pinkner, a Champions Club member, said. “But he really looked the real deal.”

Now, Maryland will put its faith in the next man up. Josh Jackson transferred from Virginia Tech, and while coach Mike Locksley has yet to name a starter, he appears to be the frontrunner.

Still, there’s a lingering feeling surrounding Hill’s two-season stint at Maryland of what could have been. We’ll never know.

“I think he would’ve been a star for us,” Novak said. “But life moves on.”