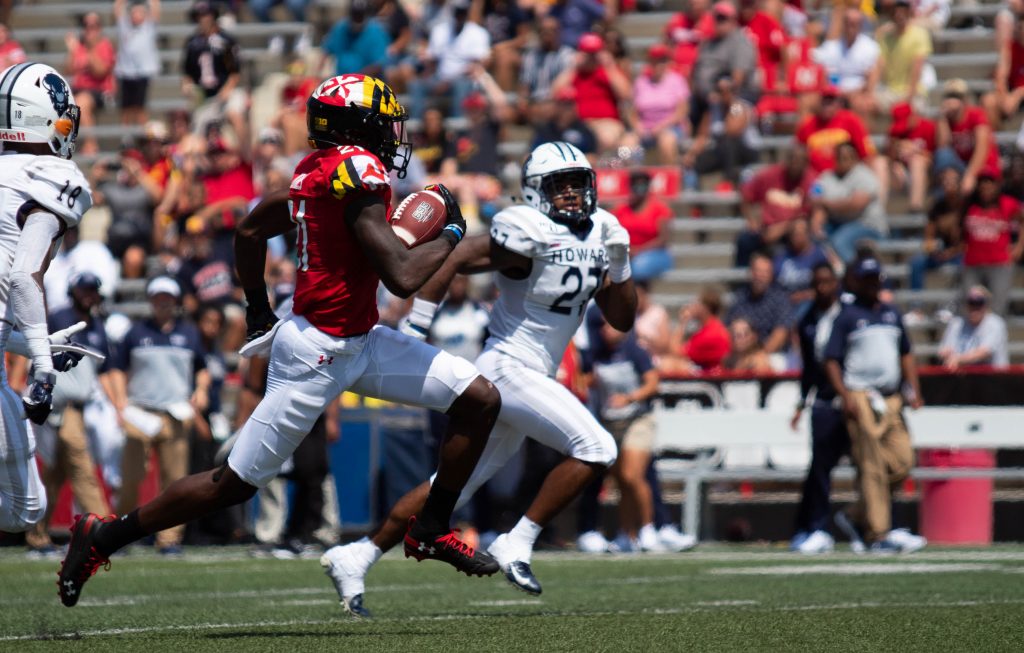 Wide receiver Darryl Jones runs with the ball in Maryland football's 79-0 win over Howard on Aug. 31, 2019 at Maryland Stadium. (Julia Nikhinson / The Diamondback)

Mike Locksley made it clear at his weekly press conference Tuesday: for all the hard work that landed him his “dream job” in College Park, for the flood of emotions he would have on the bus en route to Maryland Stadium on Saturday morning, he wouldn’t shed a tear.

He was hired in December from Alabama, where he served as offensive coordinator during another run to the national championship game. Before that, he enjoyed a three-year stint in College Park, including a period as interim head coach. And before that, he was unsuccessful in his first head-coaching gig at New Mexico.

It all led back here, to a second chance at a top job, at the program that means more to him than most. Saturday, though, was for football. Not sentiment.

“I will love every minute of being the coach at the University of Maryland,” Locksley said Tuesday. “But we’ve got work to do.”

That work began months ago, during spring and fall camps, film reviews and weight room sessions. On Saturday against Howard, the preparation unfolded into a season-opening 79-0 evisceration of Howard, an FCS team that couldn’t compete with the firepower of Locksley’s offense — or in any other facet of the game.

Maryland’s 307 first-half passing yards — 245 from Josh Jackson and 61 from Tyrrell Pigrome — were the most it has had in a game since 2014. The Terps’ 56 first-half points, with two scores each from wideout Dontay Demus and running back Anthony McFarland, were the most in any half in program history. The 79 total points were one short of a program record. And Jackson’s four touchdown passes were the most from a Maryland quarterback since Caleb Rowe in 2015.

“We wanted to start fast,” Locksley said postgame. “We did that in all three phases.”

If there’s anything tied to the start of Locksley’s era in College Park, it’s Jackson. The gunslinger, a graduate transfer from Virginia Tech with two years of eligibility remaining, was the most prominent addition to the new head coach’s squad. Locksley had inherited a quarterback room with Kasim Hill, Tyrrell Pigrome, Max Bortenschlager and Tyler DeSue — a foursome who had passed for 3,785 yards in their careers combined.

He upgraded to a signal-caller who had thrown for 2,991 yards and 20 touchdowns by himself in 2017. And after a tight quarterback battle in fall camp between Jackson and Pigrome, the former prevailed. Jackson showed his poise in the pocket early, even as Howard opted to bring extra pressure to counteract Maryland’s running game.

“I haven’t been hit in a while, so little nervous about that,” Jackson said. “It was just nice to get back into the swing of things.”

Jackson stood tall in the pocket, ignoring the free rusher bearing down on him, and fired across the middle of the field early in the first quarter. Demus reeled in the pass, broke a tackle and took it to the house for a 26-yard catch-and-run.

It was the first of eight first-half touchdowns, including a 62-yard strike to Demus from Pigrome, a 40-yard punt return from D.J. Turner and a 24-yard touchdown to tight end Tyler Mabry, a graduate transfer from Buffalo.

“All of us are playmakers,” Demus said. “Jeshaun [Jones] going down [with a torn ACL] just helps us move better. He’s fueling us. We’re out there playing for him, playing for our brothers, every single day.”

As a true head coach, Locksley quickly turned the topic of his opening statement after Saturday’s win to what he’d like to see improve next week against Syracuse and beyond. The penalties — one of which called back a touchdown the Terps made up for in a hurry — a few missed tackles and a missed throw on a double-move from Jackson stood out to Locksley.

After all, Maryland will only see its competition steepen from this point onward. What proved inconsequential against the Bison may be a game-changer later.

“You usually, as a team, make your biggest jump from Week 1 to Week 2,” Locksley said.

But as the Terps neared a point total more suitable for basketball, and Jackson and Pigrome gave way to DeSue and true freshman Lance LeGendre under center, little changed. The pace slowed, but in a contest that appeared over after the first quarter, there was no let up.

Locksley was back in College Park. He made the most of game one.

“Driving in, there were some memories,” Locksley said. “But then once we got here, it’s onto business.”