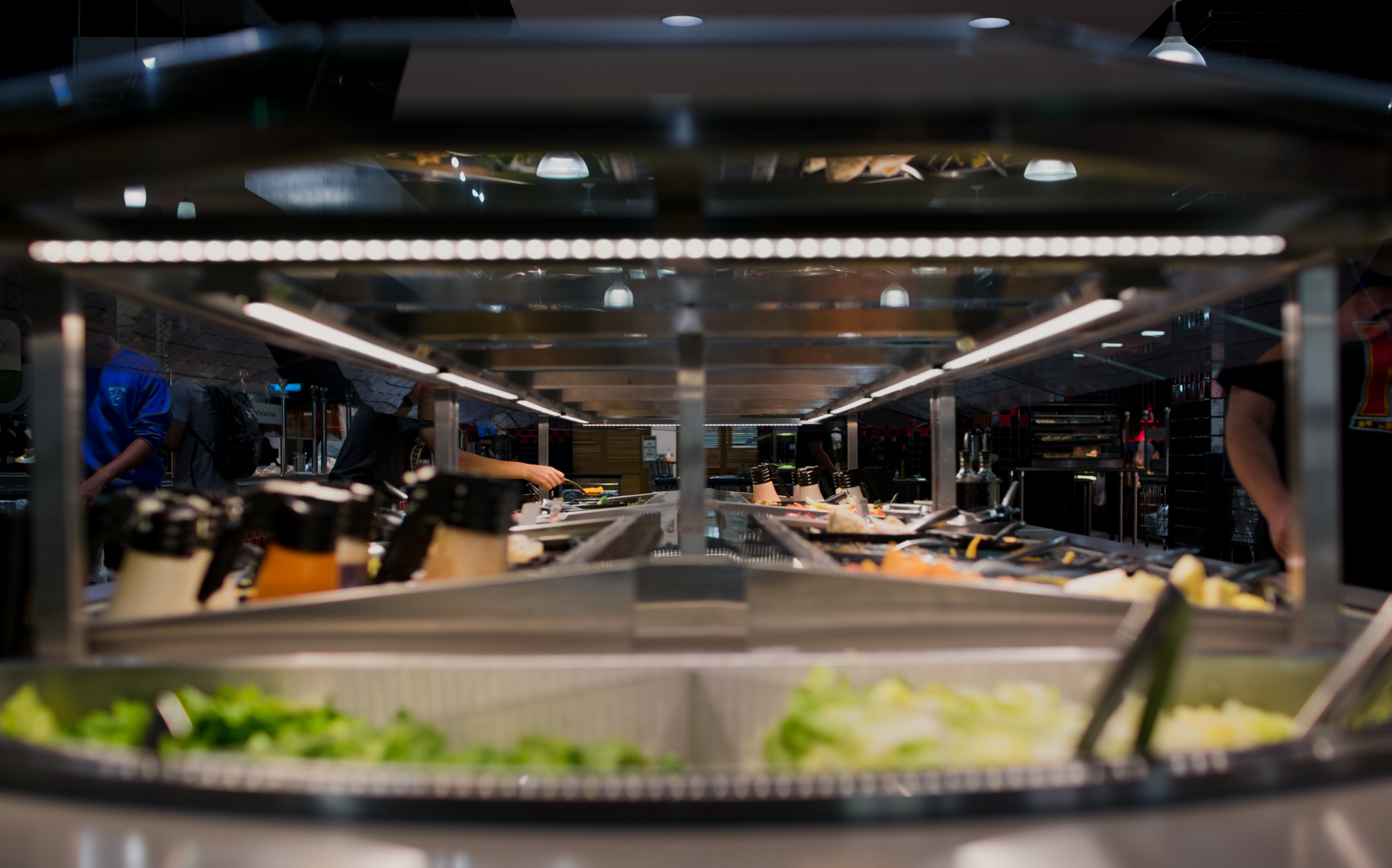 The University of Maryland, as a part of the Cool Food Pledge, is striving to promote sustainable eating habits on campus through the dining halls. (Gabby Baniqued/The Diamondback)

You may see more fish and vegetables at University of Maryland dining halls in the coming months.

This university has become the world’s first to sign onto the Cool Food Pledge, an initiative created by the World Resources Institute and other groups that aims to reduce “food-related” greenhouse gas emissions by 25 percent by 2030.

The platform focuses on encouraging hotels, restaurants, hospitals and other places with dining facilities to collectively slash their food-related emissions by providing more “climate-friendly food,” according to a university news release.

“By pursuing delicious food that is good for us and good for the environment, we can solve a lot of today’s challenges,” said Allison Tjaden, Dining Services’ assistant director of new initiatives. “We’re in the food business, so we’re all about it.”

Dining Services spokesperson Bart Hipple said campus dining halls will be trying to embrace plant-based foods, which are less resource-intensive than animal-based ones. No meat will be eliminated from the menus, he said, but the department hopes to gradually shift away from using meat as the main component of its dishes — focusing on vegetables, fruits and beans instead.

“We are not going to try to make everybody into a vegetarian,” Hipple said. “We are going to emphasize the flavor values of different kinds of vegetables and plant-based foods. We are going to be experimenting.”

The university has been working on several initiatives that aim to reduce carbon emissions and mitigate climate change for the past several years.

The Sustainable Food Commitment, for example, was implemented in 2012. It sought to purchase 20 percent sustainable food — defined as food that’s good for human health, responsibly sourced and ecologically sound, among other criteria, Tjaden said — for use in campus dining halls by 2020.

The commitment led to projects such as the Terp Farm, a sustainable vegetable farm located 15 miles off campus in Prince George’s County.

And last year, this university joined the Menus of Change University Research Collaborative, an initiative aimed at implementing 24 principles of “Healthy, Sustainable Menus” in campus dining halls, according to Dining Services’ website.

“When I would eat at the dining halls, they would have more meat-centered specials, so it’s really cool to hear that there might be more plant-friendly options for specials,” Dorsey Riley said.

[Read more: The Co-op closed — but these students are trying to keep its spirit alive]

Some of the Menus of Change principles include serving “more kinds of seafood, more often,” since seafood has a smaller carbon footprint than beef and other land animal products.

Dining Services hopes to advertise its new initiative through table-top tents, posters and menus that will subtly educate and promote the coming changes, Hipple said. The department has already begun working on putting new, more environmentally-friendly food on their menus, Tjaden said — and she’s been pleasantly surprised by the results.

“When I first started, you wouldn’t think that students would want to be eating things like quinoa and farro,” she said. “But this is the stuff that students want to eat.”

Tjaden said a part of the initiative is working with student groups on campus as a way to foster new ideas about sustainable food.

Maya Zambrano-Lee, a senior environmental science and policy major and president of the university’s chapter of the Sustainable Ocean Alliance, said she’s in favor of the initiative, but that eating sustainably can be more complicated than it seems. She said she hopes the new menus don’t focus too much on seafood as a solution.

According to a study from the Netherlands Environmental Assessment Agency, some seafood has a lower environmental impact than livestock farming. However, about 85 percent of the world’s marine fish stocks are “fully exploited or overfished,” according to the United Nations Food and Agriculture Organization. And ocean health declines when fish are harvested faster than the environment can replenish them.

“I’m really glad that Dining Services is being conscious of their decisions in terms of where they source their seafood and how they source it and what species they are choosing to offer,” Zambrano-Lee said. “I just hope that students start to opt for more plant-based diets that don’t rely on seafood too heavily either.”

Hipple hopes the new initiative will inspire students to think about what they eat and the choices they can make when choosing food for themselves.

“This is the time where you start your own first kitchen,” he said. “You start to think, ‘How do I want to eat for the next part of my life?’”