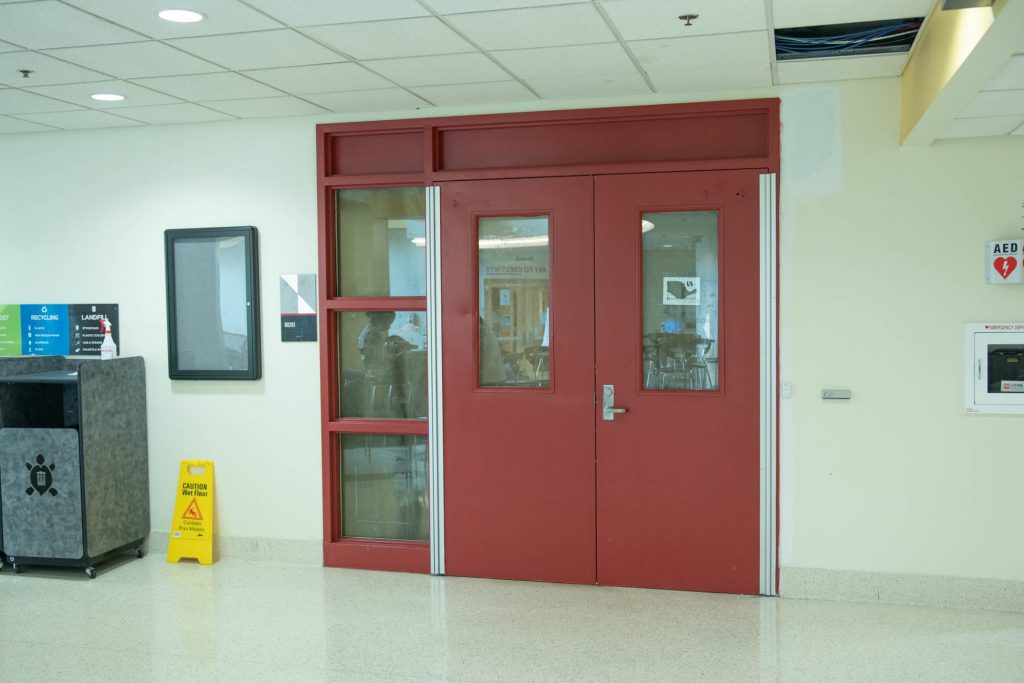 The doors to what used to be the Maryland Food Co-op in the Stamp Student Union. (Richard Moglen/The Diamondback)

Several months after the Maryland Food Co-op closed its doors for good, its former workers and patrons are brainstorming ways to continue its mission.

The worker-owned sandwich shop — which students have long praised for its vegan-friendly food and colorful atmosphere — shuttered in May due to lingering debt. Rather than mourning what’s lost, though, students say they’re committing to other cooperative ideas.

“Although it does suck that the Co-op had to close, I’d much rather build a new ship than save a sinking one,” said former worker-owner Max Skoglund, a senior environmental science and policy major.

The empty space where the Co-op stood for more than 40 years, tucked in the Stamp Student Union’s basement, is set to become employee IT offices in about six months, said Stamp director Marsha Guenzler-Stevens.

But since the shutdown, students have been meeting weekly at the LEAFhouse — a solar-operated house on campus built by students and faculty — to discuss plans for what to do next. One idea is a thrift shop or clothing exchange, said Emily Fox, a sophomore philosophy, politics and economics major who also worked at the Co-op.

“The clothing industry, especially the fast-fashion industry, is one of the biggest polluters in the world,” she said. “They produce cheap clothing that is usually thrown away after a year, and they waste tons of valuable resources while also exploiting workers in foreign countries.”

[Read more:  College Park is set to get a new thrift store this summer]

Fox said the clothing swap would allow students and others in the community to donate used clothing they no longer wear in exchange for “credits,” depending on the type of clothing received. The credits could then be used to purchase different clothes from the pop-up.

The group plans to test this model on McKeldin Mall at the First Look Fair next week.

Fox said she’s excited for the pop-up and hopes it can provide a way to limit clothes waste. Aviah Krupnick, a sophomore business management and philosophy, politics and economics major, believes it will appeal to a diverse group of people due to recent trends and interest in “thrifting.”

She also hopes the initiatives spread off campus to the College Park area, which has a variety of thrift stores. The newest one, Uptown Cheapskate, opened this past summer.

“I think having community roots is really important to be sustainable,” said Krupnick. “Finding a way to mobilize people and get them engaged is going to be pretty difficult, but we’re hoping that these smaller initiatives will keep people engaged and get them involved in the community aspect which made the food Co-op so important to all of us.”

Krupnick said the group is also considering other initiatives, such as “coffee and co-operative” open-mics and regular podcasts geared toward students and community members.

These events are only in the planning stages, Krupnick said. The group is divided into committees, she added, each of which is composed of a few students and works on pursuing a different idea.

There’s no concrete business plan as of yet, Skoglund said. But he hopes that right now, he and his team can focus on promoting the idea of worker-ownership and workplace democracy — values that were inherent to the Co-op.

While launching a new food co-op is a tempting idea, Fox said it would be difficult. There are more healthy options in the dining halls and new restaurant openings in Stamp, so the market would be competitive.

Still, she and the other members are confident the co-op model can be prosperous once again.

“I still have a lot of faith in cooperative business,” she said. “The fact that the Co-op existed for 45 years just shows that these types of businesses can be really successful.”