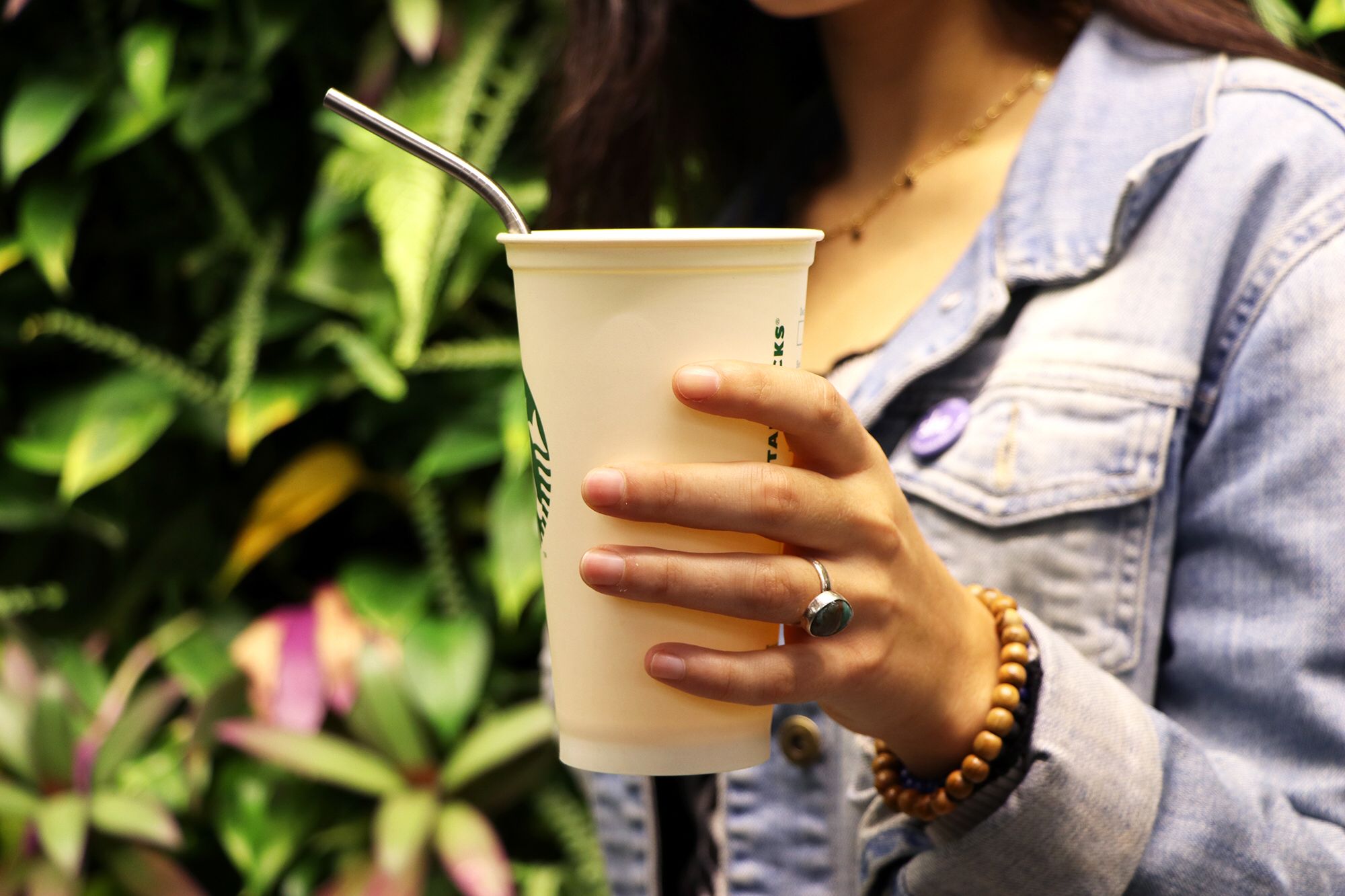 Maya Zambrano-Lee, president of the university’s Sustainable Ocean Alliance, frequently carries around reusable metal straws to avoid using plastic ones. Her group is among those advocating for cutting out plastics at campus convenience stores. (Julia Nikhinson/The Diamondback)

Facing pressure from student groups, the University of Maryland’s Dining Services is applying for a grant that would help it cut back on plastic use in campus retail shops.

If received, the grant would allow the department to replace all plastic straws and bags in the 25 campus convenience stores and cafes with paper ones and all plastic utensils with compostable ones.

The grant, which would come through the campus sustainability fund, would also replace all individual creamer cups with bulk creamer cups and get rid of plastic stirrers.

Dining Services, the Student Government Association and a student group called the Sustainable Ocean Alliance have been working together to determine how to implement the changes.

“We use [plastic] for a few minutes, and it lasts forever,” said Maya Zambrano-Lee, SOA’s president. “We are the future, and our future looks grim without the ocean.”

Plastic can take more than 400 years to break down, according to National Geographic. And a 2016 report called “The New Plastics Economy” by the Ellen MacArthur Foundation and the World Economic Forum estimated that, by 2050, the ocean will contain more plastic than fish.

“The cost and availability are two of the major barriers for food service or retail operations to make these [kinds] of changes,” she said.

Dining Services currently spends approximately $18,000 per year on single-use items for the 25 retail shops, so the department would need to offset the difference between this spending and how much the eco-friendly materials would cost.

Dining Services plans to move the straws closer to the cash registers in an attempt to phase them out, said Amelia Avis, SGA’s sustainability director and a member of the Sustainability Council. This way, they’d only be given to customers upon request.

The grant money would also go toward an outreach program that would teach students about why more environmentally-friendly items are replacing single-use plastics, Tjaden said.

“It will take a little bit of adjusting for people,” said Zambrano-Lee, a junior environmental science and policy major. “Any shift in a social norm is challenging to get used to immediately, but I think it’d be really good for the community.”

SOA’s petition to ban plastic straws across the campus has been signed by 258 indivuals and nine student groups, including the Maryland Food Cooperative and the Maryland Dairy, both of which switched from plastic straws to compostable ones last semester.

Freshman journalism major Hannah Butera thought it was a good idea to become more eco-friendly, but said she had doubts about the initiative’s potential.

“I feel like people will still continue to not recycle and continue to litter,” she said. “So I don’t know if that much money is totally worth the outcome,” Butera said.

The SGA’s Sustainability Committee has written a letter supporting the plastic reduction initiative and expressed its desire for it to be expanded campuswide, said Avis, a senior government and politics major.

“I think it’s really great,” Avis said. “I think despite the high cost, it will have a really good impact.”

The committee has worked with Dining Services in the past on plastic bag and composting campaigns as well as spreading awareness of green practices, Avis said.

If awarded the money, Tjaden said “we can kind of go all-in all at once,” but, without the funds, the process may be delayed.

Junior information science major Hailla Vinson said she has tried paper straws at Starbucks and “had no issues with them.”

“The only issue I had was it got soggy after about an hour,” she said, “but it still worked fine and did not break down in my drink.”