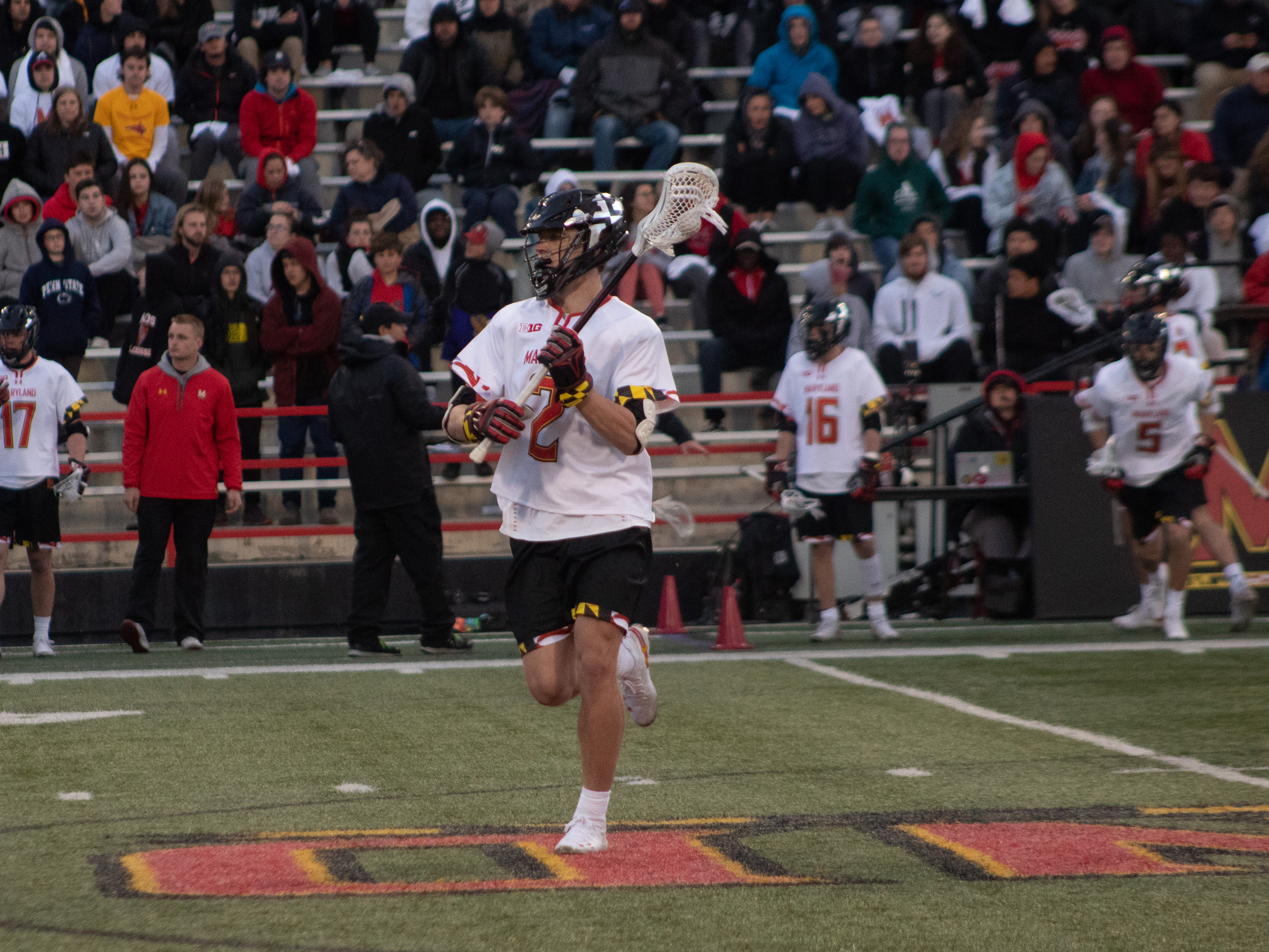 Midfielder Bubba Fairman carries the ball during No. 3 Maryland's 13-10 loss to No. 1 Penn State at Maryland Stadium on March 31, 2019. (Tyrin Gray/The Diamondback)

Recently, when the Maryland men’s lacrosse team has started practice with its usual stretching routines, midfielder Bubba Fairman said the players have tried to bring more energy to a squad in need of a jolt.

In two of their three Big Ten games this season, the Terps have stared down early deficits. No. 2 Maryland trailed No. 1 Penn State by seven at the end of the first quarter of an eventual 13-10 loss. Two weeks later, in its 16-13 victory over Rutgers, coach John Tillman’s squad allowed the first three goals and trailed by as many as five in the first half.

After a day off Monday, Tillman emphasized the importance of finding more success early on in games to avoid constantly falling behind against high-quality opponents. Now, the team is exploring ways to resolve that issue before it takes on No. 7 Ohio State on Saturday.

“It’s not as easy as just kind of giving them the pregame speech,” Tillman said after Sunday’s win over the Scarlet Knights. “That’s something we’re going to have to take a look at, because we can’t keep digging ourselves a hole and expect to, at this time of year, dig yourself out week after week.”

[Read more: Cancer prevented Josh Rubinstein from playing lacrosse, but Maryland keeps him close to it]

Just over four minutes into the game against Rutgers, the Terps’ lack of urgency was apparent. Midfielder Anthony DeMaio’s pass at the top of the offensive setup was easily knocked down, and the Scarlet Knights scooped the ball and got out in transition, showing their early desire to play fast. They finished the chance for the game’s first goal en route to a quick 3-0 start.

At other times, the slow starts can be attributed to defensive breakdowns. Penn State feasted on open cutters and shooters early on, and Rutgers employed a similar approach, using off-ball movement to exploit holes in the Maryland defense.

“Out the gate we haven’t been great with our communication,” defensive midfielder Roman Puglise said. “Then you see we’ll go on spurts where we’ll hold teams scoreless for awhile. So everyone just being on the same page right out the gate.”

When the Terps travel to Columbus on Saturday, the Buckeyes will also be looking to buck a recent trend of lackadaisical starts.

In each of its last four outings, Ohio State has incurred a halftime deficit. Coach Nick Myers’ team split those four games, but they’ll be looking to reverse that streak at home against the Terps.

Last season, the Buckeyes visited College Park and stormed out to a 3-0 lead less than four minutes into the game. That quick start propelled an unranked Ohio State team to an upset victory over then-No. 1 Maryland, 12-10.

“Last year, they came in here and beat us pretty well,” Puglise said. “We gotta bring that back to them this year.”

Puglise said he and his teammates will try to generate some extra energy in the pregame warmups this week to help solve their early misfires on both ends of the field.

But even with that added motivation — and the desire to avenge last season’s home loss — Fairman said it will be important to find the right mixture of aggressiveness and self-control in the top-10 road contest.

“Ohio State’s a tremendous team,” Fairman said. “I think for us, it’s kind of finding that balance between coming out firing, but also being maintained with our composure.”