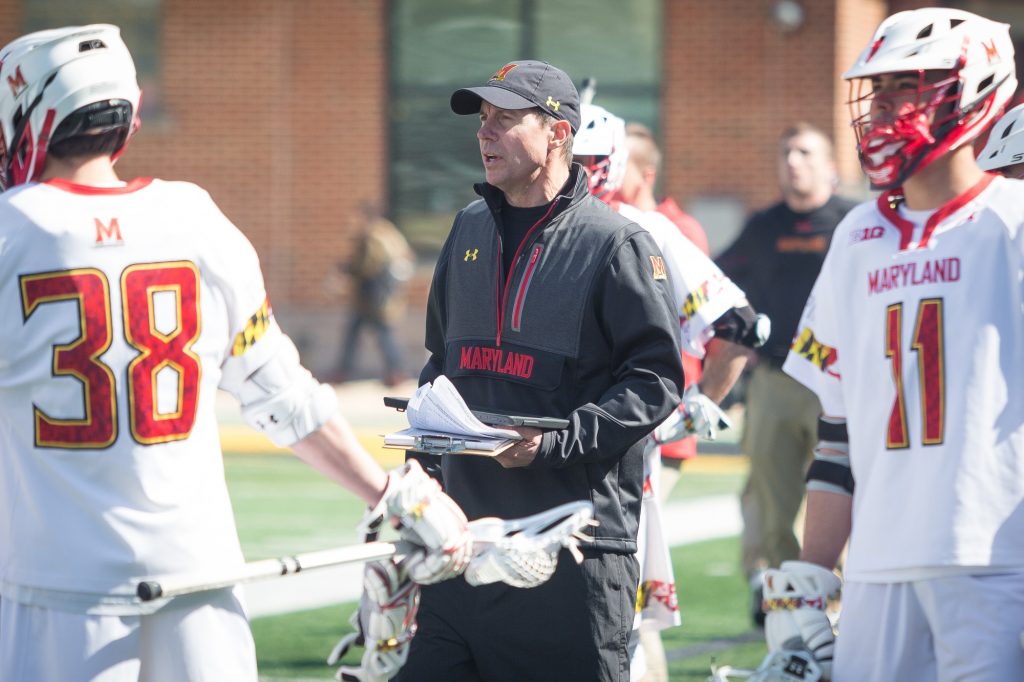 With 33 seconds remaining in the No. 1 Maryland men’s lacrosse team’s game against Ohio State on Sunday, defenseman Bryce Young snapped his stick in two over his helmet in frustration. Seconds prior, he watched Buckeyes midfielder Jack Jasinski score into Maryland’s empty net, giving the Buckeyes a three-goal lead.

As time expired, the 6,395 fans at Maryland Stadium watched the Buckeyes rush the field and celebrate, the same way fans of coach John Tillman’s team did last Memorial Day. In a rematch of last season’s national championship game, the Terps displayed encouraging moments but were generally flat. Maryland couldn’t find answers at the faceoff and had difficulty figuring out the Buckeyes’ defense.

Meanwhile, Ohio State arrived in College Park at .500 and seeking a win to keep its postseason aspirations alive. Sunday’s 12-10 win against the Terps, which came exactly a year after the Buckeyes’ last victory over Maryland, did just that.

“We’re not scared of anybody,” Jasinski said. “We knew they were going to try to intimidate us. We stood our ground and told them, ‘Hey, you’re not going to come in here and bully us.’ That was what we did on the first play of the game. We came down the field, one shot, one goal.”

The Buckeyes took offense to Maryland crossing the 50-yard line during pregame warmups, they said, perhaps fueling their biggest win of the season and explaining why some Ohio State players played peacemaker to avoid a skirmish during the post-game celebration.

This year’s Ohio State team is far from the same squad Maryland played three times last season, when the Terps lost in the regular season before beating the Buckeyes in the Big Ten and NCAA tournament championship games. A win Sunday would have given the Terps (10-2, 3-1 Big Ten) a share of the Big Ten regular season title.

Instead, Ohio State (7-6, 2-2) dealt the Terps a stunning loss ahead of Maryland’s regular-season finale against No. 7 Johns Hopkins on Saturday.

“They’re not an overly complicated group,” Tillman said. “They didn’t give us anything different than we practiced. We had some communication breakdowns.”

Maryland won just nine of 26 faceoffs and couldn’t stop a Buckeyes attack that entered the matchup averaging about nine goals per game.

Trailing to open the fourth quarter for the first time this season, the Terps were unable to orchestrate a comeback. Buckeyes midfielder Jackson Reid gave Ohio State a lead with about 13 minutes remaining in the fourth quarter. The Buckeyes led the rest of the way, not letting Maryland within one goal in the final six minutes.

Maryland was forced to play from behind from the start, an unfamiliar position for a team that has scored at least 10 goals in every game. Led by attackman Colin Chell, the Buckeyes opened the game with three unanswered goals, creating the largest deficit the Terps have faced this season.

The Terps responded with their own three-goal spurt to tie the game in the first quarter and took their first lead about halfway through the second quarter, when midfielder Connor Kelly found the net to make it a 5-4 contest. Despite winning just three of 14 first-half faceoffs, Maryland entered the intermission tied with the Buckeyes at six.

“We keep it very composed in the huddles, especially during timeouts,” midfielder Adam DiMillo said. “We are prepared for any situation that is thrown at us. There’s no lapse in composure.”

But little changed for the Terps after halftime. Ohio State started the second half the same way it opened the first — with a 3-0 run that quickly put the Terps in a hole. Maryland drew within a goal to end the third, but another 3-0 Buckeyes run in the fourth quarter put the game out of reach.

After feeling disrespected before the opening whistle, the Buckeyes avenged their national championship loss and got the last laugh, leaving the Terps bewildered and frustrated.

“They came out with a lot of energy and jumped on us pretty fast,” Tillman said. “We couldn’t seem to get ahead. They do a great job of having long possessions and capitalizing. It wasn’t our day.”