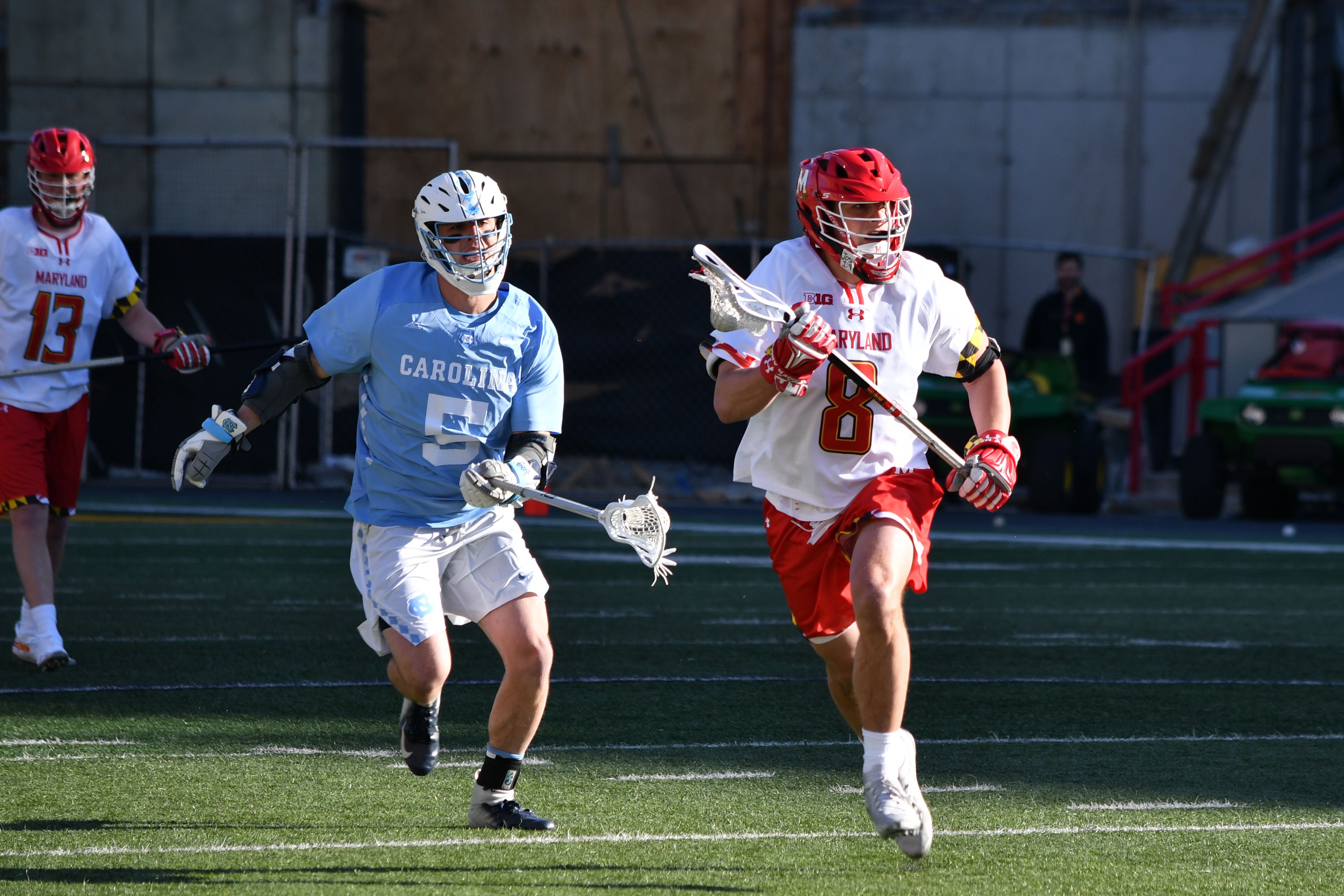 Midfielder Roman Puglise pushing against North Carolina in Maryland's 16-9 win over the Tar Heels at Maryland Stadium on March 23, 2019. (Alex Chen / The Diamondback)

Maryland men’s lacrosse had rallied all the way back to cut a seven-goal deficit down to one, and it had three opportunities to pull even with No. 1 Penn State.

But with a chance to tie, top scorers Logan Wisnauskas and Jared Bernhardt combined for three turnovers on consecutive possessions. Then, the Nittany Lions scored three goals in quick succession to open their lead back to a comfortable margin.

The three miscues loomed large as No. 3 Maryland’s furious comeback came up short at the hands of the nation’s top-ranked team, falling 13-10 on Sunday night at Maryland Stadium.

By surviving the comeback attempt, the Nittany Lions knocked off the Terps for the first time after going 0-36 since the first matchup in 1924.

Penn State’s high-octane attack struck first and often, scoring on its first possession of the game as attackman Mac O’Keefe, the nation’s leader in goalscoring, fired his lefty shot past goalkeeper Danny Dolan.

Maryland faceoff specialist Austin Henningsen won the ensuing faceoff, and midfielder Will Snider unleashed a shot on the run that bounced into the back of the net to level the score.

The initial back-and-forth quickly gave way to a Penn State onslaught, though, burying the Terps in a hole they struggled to recover from.

“Obviously disappointed in how we came out as a defensive unit,” midfielder Roman Puglise said. “Give credit to Penn State, [the] No. 1 scoring offense in the country. They showed it, and they showed it fast and often in that first quarter.”

The Nittany Lions repeatedly found holes in Maryland’s defense, using their constant off-ball movement to free themselves for open looks. As a result, Penn State went on a 7-0 scoring run to close the first quarter and open up a convincing advantage. O’Keefe netted one chance with 18 seconds left, and midfielder Jack Kelly scored with one second remaining.

But in the second quarter, Maryland’s defense settled in and closed off some of the openings Penn State had exploited.

Despite the stops on the defensive end, the Terps’ attack was mired in an extensive scoring drought and couldn’t find any openings. Following Snider’s goal with 12:03 left in the first, Maryland went another 25 minutes without a tally.

To break that scoring drought, Maryland turned to Bernhardt to score with a strong right-handed shot. Then, with 19 seconds left in the opening half, attackman Louis Dubick hit a one-timed shot in front to give Maryland momentum going into the break, down 8-3.

Building off those late first-half scores, Maryland scored the first four goals of the third to close their once-large deficit to one. Puglise, known more as a defensive player, found two opportunities in transition and hit his perimeter shots, including one to make it 8-7 with 8:27 to go in the third.

With a chance to even the score for the first time since early in the first quarter, Maryland squandered three possessions with turnovers. And after miscues on those possessions, Penn State rediscovered its prolific scoring. The Nittany Lions scored three goals in the span of two-and-a-half minutes to open their advantage back to four goals early in the fourth quarter.

“It certainly felt like we were doing some things that were uncharacteristic of what we were doing in the first half,” Penn State coach Jeff Tambroni said. “But [I was] really excited to see these guys battle back when our backs were against the wall.”

Bernhardt, who finished with three goals and two assists, tried to will Maryland back into the game for a second time, scoring on a diving goal and finding Wisnauskas cutting to the net for a goal that got Maryland back within three scores with just under seven minutes remaining.

But Penn State’s offense proved to be too lethal to hold down for the remainder of the game, as they used an extra-man opportunity to stave off the Terps’ second comeback attempt of the night and solidify the result.

“There was some opportunities and we just didn’t can them,” Tillman said. “And then you know they’re going to make a little bit of a push, and they just made some plays.”