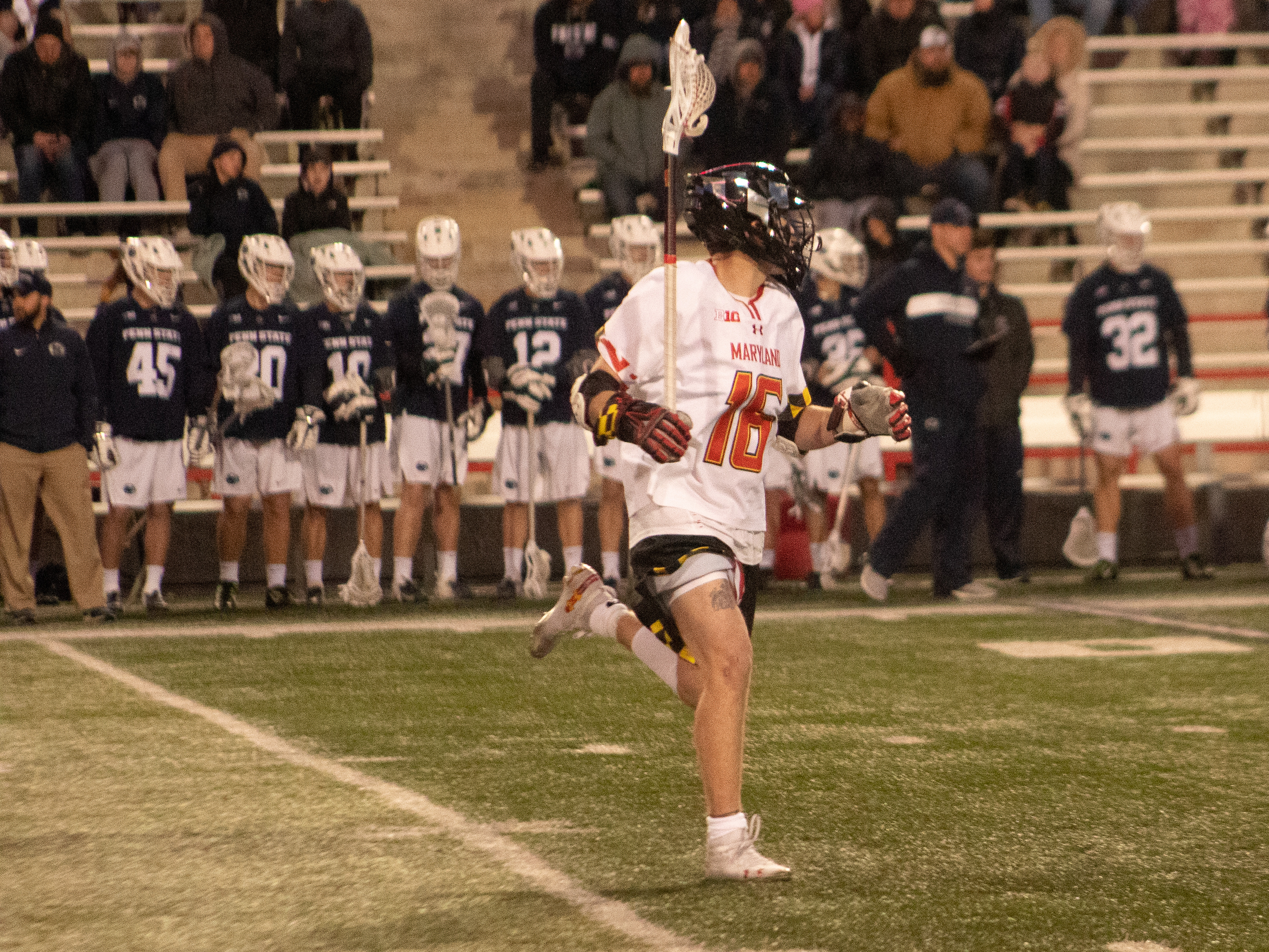 To open the second quarter against Rutgers, Maryland men’s lacrosse inserted midfielder Wesley Janeck — typically the third option to take faceoffs — to try and break a long faceoff drought that had propelled the Scarlet Knights to an early lead Sunday.

Following that debacle, coach John Tillman returned to his regular options, and they took advantage of their second opportunity.

Scarlet Knights faceoff specialist Connor Harryman dominated in the first half, but the Maryland faceoff unit gave the Terps’ attack ample opportunities to stage a second-half comeback and put the game away, leading to a 16-13 win over the Scarlet Knights.

“I have to give a lot of credit to [Harryman], he was on fire in the first half. We couldn’t find answers, we were rotating guys,” faceoff specialist Austin Henningsen said. “The tides changed, as you saw, in the second half.”

Rutgers opened the first half 11-for-16 from the X. So, when faceoff coach Tyler Barbarich gathered his group at halftime, Henningsen said he emphasized sticking to the preparation it received during the week. In the second half, Tillman said the faceoff wings pitched in and came away with more of the 50-50 balls that Rutgers earned the majority of in the opening half.

Looking for its first win against Maryland since 1980, and just the second in history, Rutgers began the game with a 3-0 scoring run, all of which came in just over 90 seconds as Harryman won the ball right back each time.

To cap off the scoring run, the Scarlet Knights worked the ball to attackman Kieran Mullins behind the net. Maryland goalkeeper Danny Dolan left his cage vacant in an effort to defend Rutgers’ top playmaker, but Mullins quickly passed to attackman Adam Charalambides for a wide-open score to force a Maryland timeout.

Out of the break, attackman Logan Wisnauskas found midfielder Christian Zawadzki staked out in the middle of the defense, and Zawadzki unleashed for Maryland’s first goal of the game. Midfielder Anthony DeMaio and Wisnauskas followed with goals of their own within a four-minute span to tie the score at three.

Three different Terps took faceoffs in that span as Maryland fell behind, but none could give Maryland’s attack an opportunity to end the run.

“Being down that much, certainly is something we don’t want a steady diet of,” Tillman said. “We just need to start faster.”

After Rutgers took its largest lead of the game at 8-3, faceoff specialist Justin Shockey finally bucked the trend, and a perimeter shot from midfielder Bubba Fairman to cut the deficit to 8-4. Fairman scored again with three seconds left in the half to give the Terps the last two goals before halftime as the Terps trailed 9-6 at the break.

“We’ve been down before and we’ve managed to come back,” DeMaio said. “If we just get in a rhythm and are communicating really well, I think that’s when we play our best lacrosse.”

Maryland carried that momentum over to the second half, and the team’s top-three goal scorers — attackman Jared Bernhardt, Wisnauskas and DeMaio — each found the back of the net to level the score at 9-9.

The Terps solved Harryman, winning six of seven faceoffs in the third quarter. Those extra possessions were an integral part of Maryland’s comeback, which saw it turn a three-goal halftime deficit to an 11-10 lead.

“I have no idea what goes on in the offensive end of the field,” Henningsen said, “but those guys were definitely coming out hot.”

Rutgers scored twice to begin the fourth quarter and regain the lead, but Maryland rebounded. Attackman Louis Dubick scored twice from close range, then Bernhardt found the net on a diving attempt to put away three shots within 81 seconds and give the Terps a two-goal edge for the first time all night.

DeMaio and Fairman added to the late scoring burst with goals of their own, giving both players a hat trick and putting the game out of reach.

“I would say [faceoffs are] the biggest part of the game right now,” DeMaio said. “When we’re getting the ball, it’s really hard to stop us. So it really comes down to the faceoff guys.”