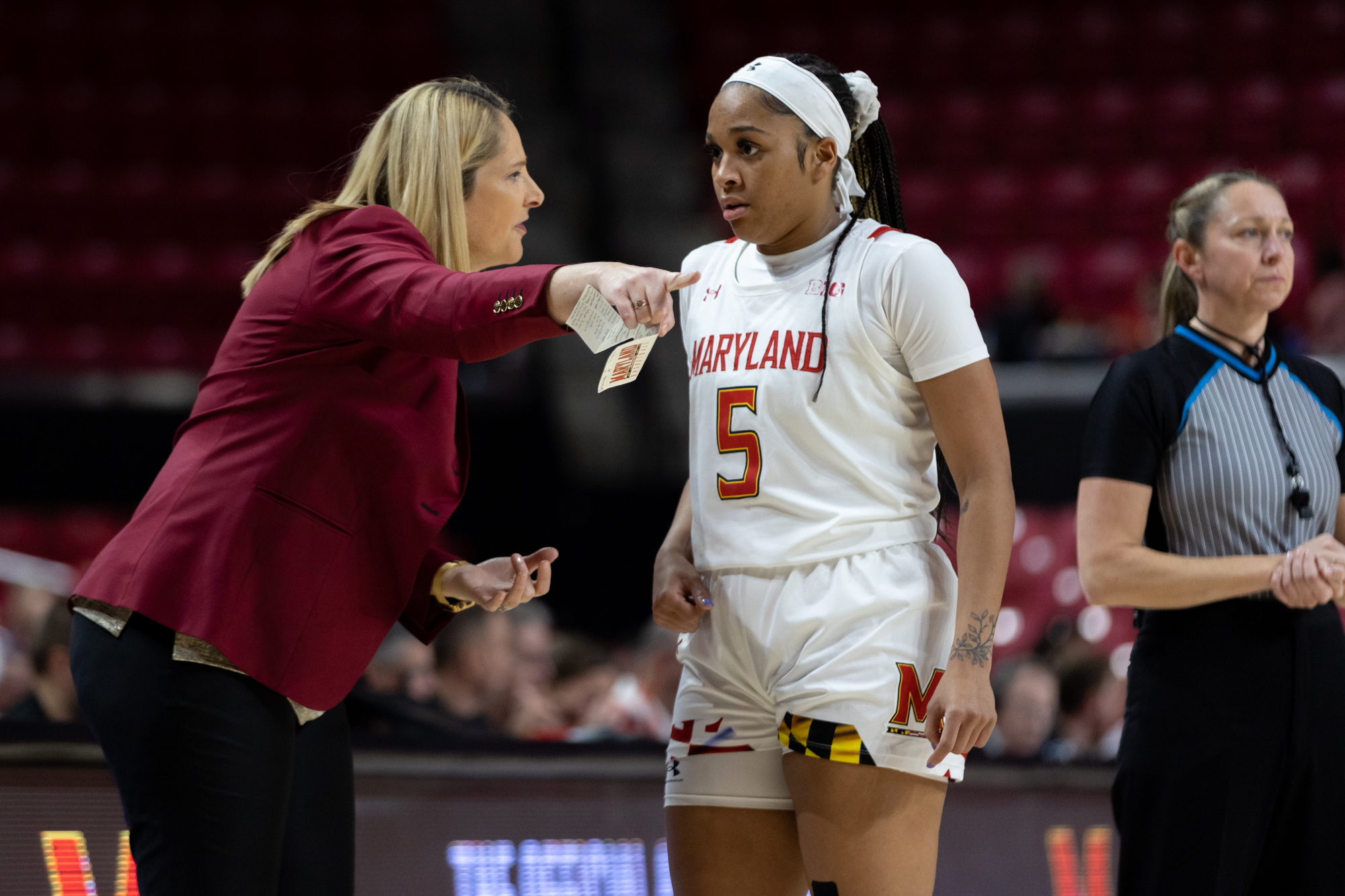 After Thursday’s loss to Indiana, Maryland women’s basketball coach Brenda Frese said her team’s negative assist-to-turnover ratio showed that her team was not “trusting the process.”

The message seems to have gotten through. The Terps bounced back against Rutgers at home in a 80-56 Sunday afternoon win by sharing the ball on offense. They finished the game with a season-high 24 assists, surpassing their previous season-high of 22 against Rutgers on Jan. 2.

“In a game like today, to be able to see that bounce-back so quickly is big and I think it continues to reinforce what we look like as a team when we understand sharing the basketball,” Frese said.

Maryland assisted on two-thirds of its made field goals. Diamond Miller showcased her passing skills near the end of the first half.

Three defenders hounded her, but rather than force a shot, the senior delivered a bounce pass to Lavender Briggs with a bounce pass who took a wide-open lane to the basket for a layup.

Shyanne Sellers and Abby Meyers led their team in assists with seven. The former also hit 500 points for her career and scored 12 in the game. She also added nine rebounds.

But Sellers wasn’t the only player to reach a milestone in today’s game. Brinae Alexander surpassed 1,000 career points and shot 6-for-8 from behind the arc to finish the game with 20 points and lead the Terps in scoring.

“Thousand points means a lot,” Alexander said. “Credit to my teammates for finding me and getting me open looks, but it means a lot to be coming in my fifth year in college, so I feel great.”

Maryland found success early in the first quarter, forcing 17 Scarlet Knight turnovers and scoring 14 points of those miscues to end the frame up seven. Miller, Meyers and Sellers combined for ten steals.

Frese’s defense was stifling and prevented a Rutgers field goal for more than six minutes. However, the visitors stayed in the game via seven free throws in the first ten minutes.

Miller scored just three points in the first half against Indiana but returned to her typical offensive capabilities with 11 first-half points against Rutgers. She finished the game with 17 points and six rebounds.

She wasn’t the only Terp to improve her shooting after the loss. Sellers finished the first half with eight points, just one less than she had after the entire game against the Hoosiers while Meyers surpassed her total from the previous game with 12 first-half points.

The increased offensive productivity led to a 12-0 run in the second quarter that provided Maryland with a secure 16-point lead heading into the half.

During that run, Sellers showed her offensive abilities. The sophomore made herself open for a pass from Mila Reynolds and shot the ball from behind the arc for three — one of 10 the Terps hit after making just six against Indiana.

Maryland, now sporting a big lead, shut down Rutgers’ scoring from the field in the third quarter. The Terps held the Scarlet Knights without a field goal for just under six minutes and allowed their opponents to shoot just 32.1 percent for the entire game.

“I think what we’re learning about ourselves every day is that we can really defend and get really great momentum,” Meyers said.