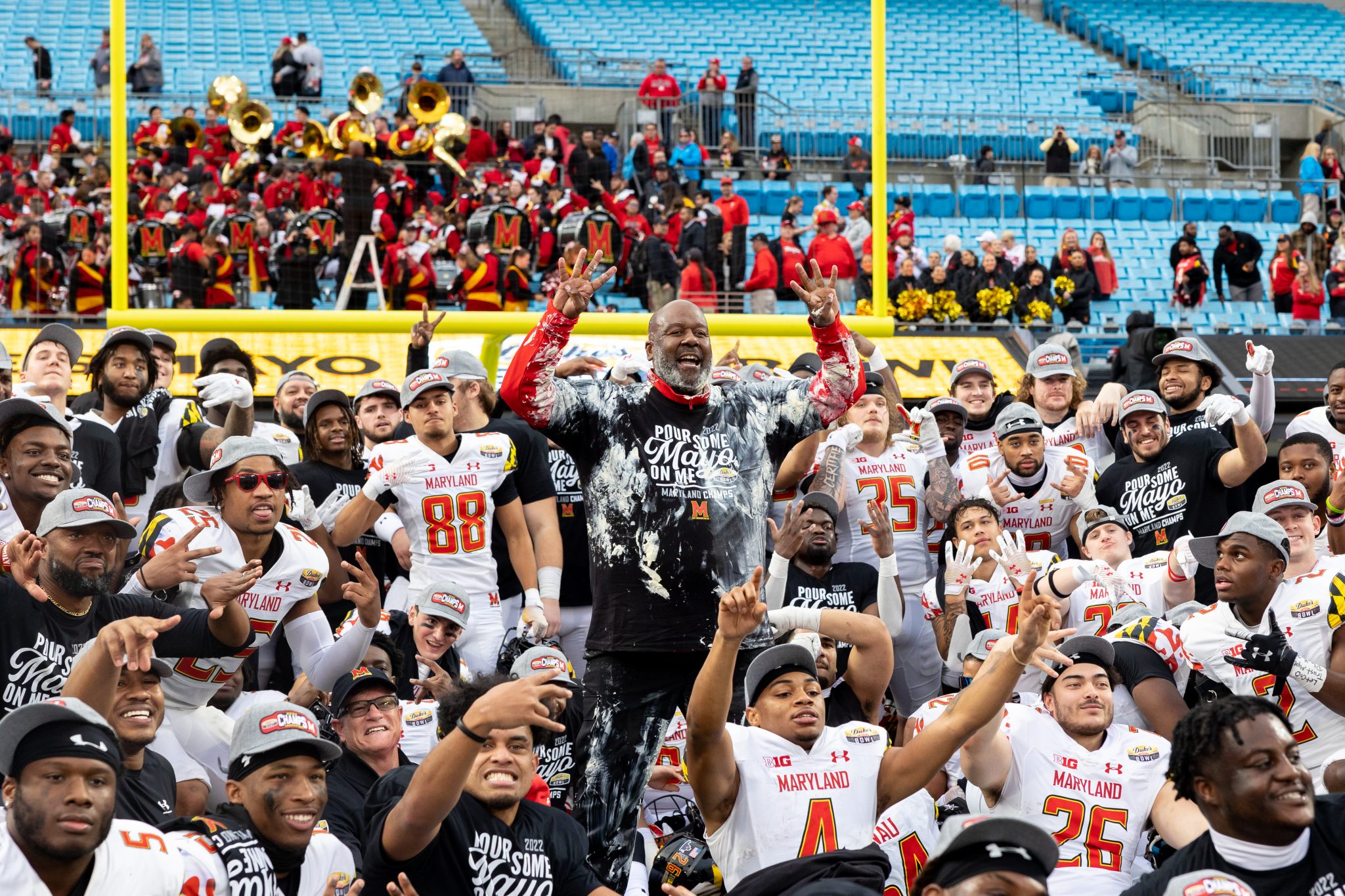 CHARLOTTE, N.C. — The first globs of mayonnaise didn’t land directly on Mike Locksley’s head. They instead fell onto his oversized Maryland hat, the brim of which deflected much of the condiment onto his shoulders.

The coach wore a blank expression as he was dumped — his face mostly protected from the mix of oil and eggs. At the urging of the gathered crowd, he took off the hat, holding it to the side, leaving him unprotected as the rest of the mayo landed on his now exposed head.

“Y’all wrong for this,” the coach said to someone in the crowd after the pouring stopped.

“Sometimes you got to sacrifice yourself for the good of the team,” he joked. The coach had a good reason to be dumped in mayonnaise — Maryland football had just won its second straight postseason game with a 16-12 win over No. 23 NC State in Friday’s Duke’s Mayo Bowl.

The Terps finished the season with eight wins, their most since 2010, and notched back-to-back bowl wins for the first time since the 2002 and 2003 campaigns. The win also marks Maryland’s first win over a team ranked by the College Playoff Committee — the Terps entered the game 0-15 against those teams in games since 2014.

Maryland’s second bowl victory differed from last year’s blowout over Virginia Tech. This year’s matchup was a low-scoring battle — putting the onus on the Terps’ less-heralded defense to step up.

They met that challenge and didn’t let the Wolfpack offense score a single touchdown, the first time they’ve done so in a bowl game since a 30-3 beatdown of Tennessee in the 2002 Peach Bowl.

“Those dudes played their butts off,” Locksley said. “We put them in some tough situations today with short fields … Holding [them] to field goals saved the day.”

In the first half, the Terps employed a bend-but-don’t-break approach, using timely plays inside their own territory to turn potential touchdowns into field goals. In the second half, they clamped down and nearly eliminated much of the Wolfpack attack — as a unit known for its second-half adjustments capped off its season by doing so one more time.

The game, like many other bowls, was marked by the names who didn’t play. Receivers Rakim Jarrett, Dontay Demus Jr. and Jacob Copeland all opted out of the game and entered the 2023 NFL Draft along with starting cornerback Deonte Banks. The absences tilted toward the offensive end, giving way to the dominant defensive performance.

NC State racked up 203 yards in the first half but didn’t score a single touchdown due to strong situational play by the Terps and an unfortunate bounce for a former Maryland pass-catcher.

Wide receiver Darryl Jones, who scored two touchdowns for the Terps last year in the Pinstripe Bowl, contributed to his old squad’s postseason efforts despite transferring to NC State. A pass bounced off his hands and landed perfectly into Fa’Najae Gotay’s grasp for the linebacker’s first career interception.

Gotay and the Terps’ defense excelled on third down, only allowing the Wolfpack to convert three of their 10 third downs in the first half. NC State’s offense stalled three times inside the Terps’ 25-yard-line, as kicker Christopher Dunn tied a Duke’s Mayo Bowl record for field goals made by one kicker with four.

In the second half, Maryland’s domination was complete. It held NC State to just 25 total yards and no points in the third quarter and 93 yards and three points for the entire second half.

The Terps’ performance was needed for an offense that scored just six second-half points in a disjointed performance that featured a quarterback swap after one drive.

Billy Edwards started the game for the Terps instead of Taulia Tagovailoa, completing a 45-yard pass to Jeshaun Jones to convert the first Maryland third down of the game. But that opening drive fizzled as the backup quarterback was sacked on fourth down to keep the game deadlocked.

“I’m a protective father so when we have things in house, we keep them in house,” Locksley said when asked about Tagovailoa not starting. “We’ve had games when there were other people that haven’t started for whatever reason … sometimes you have to do things to send a message and I thought the message was sent.”

Tagovailoa entered after Gotay’s pick but struggled. His first two passes missed the intended targets. His third, a wild heave, landed in Wolfpack safety Cyrus Fagan’s hands for an interception and touchback.

The quarterback finished the bowl game 19-37 for 221 yards, a touchdown and two interceptions. His offensive weaponry included veterans Corey Dyches and Jeshaun Jones, but the departures of top receivers left him with a young wide receiving corps. Freshman Octavian Smith Jr. and sophomore Tai Felton gave a preview of their potential, combining for seven catches and 111 all-purpose yards.

The two made key plays on Maryland’s lone touchdown drive. The first came from Felton, who made a 26-yard grab to convert on third and five.

The second, a jaw-dropper, came from Octavian Smith. The freshman adjusted in mid-air with a NC State defender in tight coverage to catch a 19-yard touchdown on third and 14. Smith also averaged over 24 yards per kick return, including a 41-yarder in the first quarter.

Tagovailoa finished his seasons by accumulating a few milestones. The quarterback exceeded 3,000 yards for the season and set program records for all-time completions and total touchdowns.

But despite those accolades, the game fell in the hands of the Maryland defense.

NC State had three fourth-quarter drives. The first came after a one-play Terps drive that ended with Tagovailoa’s second interception, setting the Wolfpack up in Maryland territory. They drove within 10 yards of the Terps’ end zone but were forced to settle for a field goal.

Maryland forced a three-and-out on the next possession, giving its offense a chance to salt the game away with four and a half minutes left. The Terps killed just under two minutes off the clock but had to punt the ball back.

Locksley and his squad needed the defense to pull off one last stop as NC State got the ball with 2:34 left in the game.

It took them just one play.

The Bowl MVP Jakorian Bennett, playing his last game as a Terp, boxed out former Maryland receiver Darryl Jones to secure his first stat of the game — a game-sealing interception.

“We did enough to win,” Locksley said. “You take a Terp for granted, I promise you we’ll make you pay. I’m excited for what the future looks like.”