‘It was an ass-whoopin’: 2002 Maryland football team reflects on Peach Bowl win 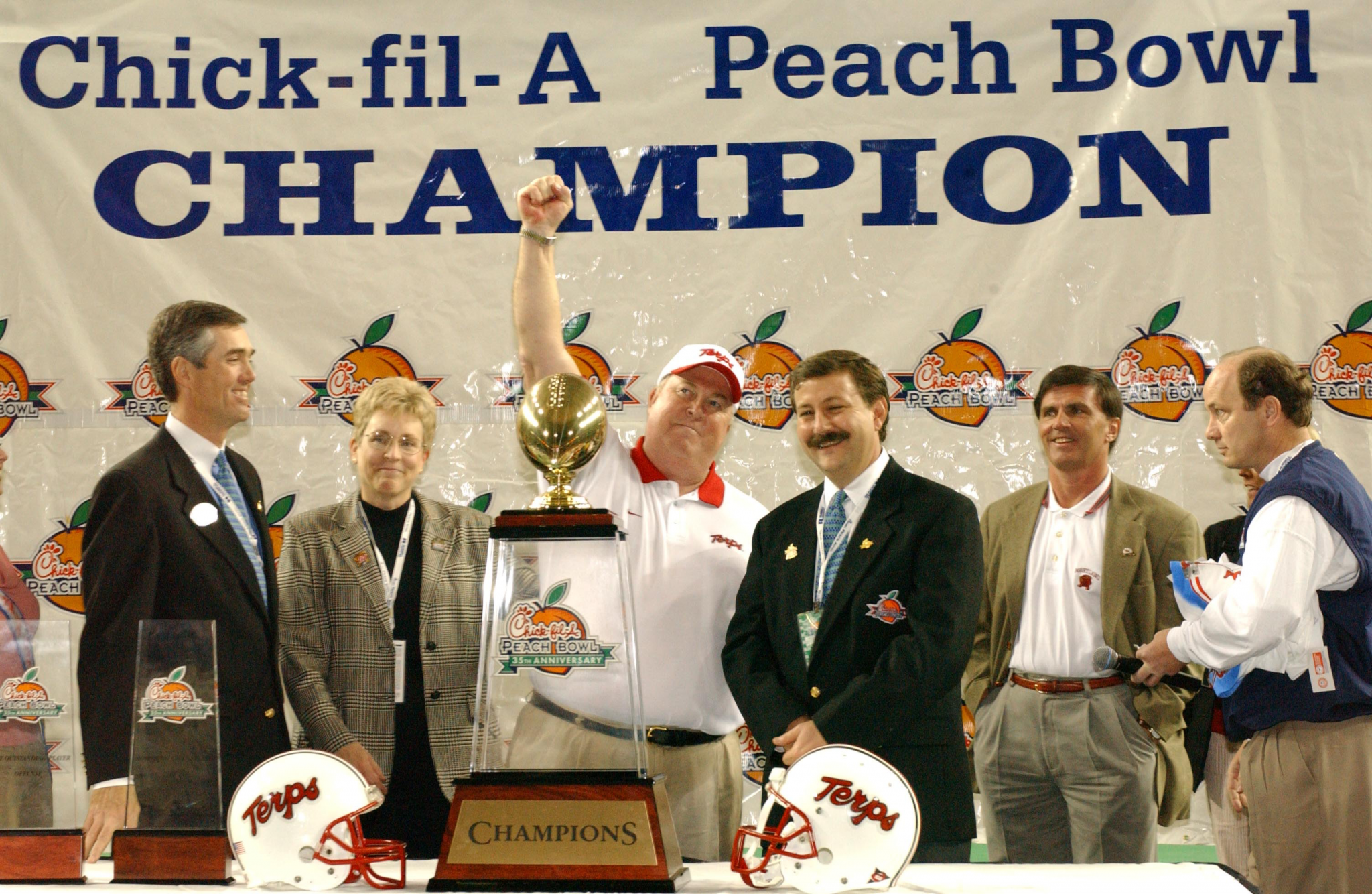 There’s a picture hanging in Scott McBrien’s office — a frame he often gazes at when he walks through the door and into work.

The image is nearly two decades old. It depicts a kneeling McBrien, clad in red and white, speaking to his teammates who stood attentively in the huddle.

“Our whole team’s kind of honing in and listening to what the play call is, and Tennessee’s defensive line is in the background waiting for us to break the huddle and the crowd is packed behind,” McBrien said. “It’s a pretty cool picture.”

Nearly every day, McBrien says, he uses the image to reminisce on the 2002 Peach Bowl, a game that’s approaching its 20-year anniversary.

Led by then-coach Ralph Friedgen and assisted by then-running backs coach Mike Locksley, the Terps ran the Volunteers out of the building in a 30-3 blowout victory in Atlanta on Dec. 31, 2002 — ending a 16-season bowl win drought for the program.

McBrien remembers emerging from Maryland’s tunnel and onto a packed Georgia Dome stage brimming with hostile Tennessee fans. He gazed over to his left during pregame warmups and located a Maryland fan section that paled in comparison to the sea of orange and white speckled across the stadium.

“That was obviously my biggest game of my career personally going into that game,” McBrien said.

Still stinging from the Terps’ 56-23 loss in the Orange Bowl to Florida after winning the ACC a year prior, McBrien knew his team was “expected to get pounced on,” he said.

The Volunteers had just dominated Michigan in the Citrus Bowl in 2001 and had an offense humming with talent — led by quarterback Casey Clausen and All-American tight end Jason Witten.

“He knew that they were gonna beat us,” Parson said. “He told us we were bums, and he said that we couldn’t play with them.”

As the Terps warmed up, the Tennessee band began playing its famous “Rocky Top” anthem from the crowd, one it plays after every touchdown.

It was a familiar melody that reverberated off of the Georgia Dome walls, according to future Pro Bowl long snapper Jon Condo.

“Instead of having crowd noise injected during practice and during two minute drills and all that stuff … [Friedgen] had on repeat the Tennessee theme song,” Condo said. “He just constantly played that thing over and over and over.”

Friedgen stressed to his team they were going to hear the tune every time Tennessee reached the end zone, drilling it into the minds and ears of his players.

But none of Friedgen, Locksley or the plethora of players heard the melody for the rest of the evening once the game commenced and the Maryland defense erased the Volunteers’ offense.

“That game was the most confident, like the peak of confidence that that program had and probably has had in a long time,” All-American wide receiver Steve Suter said. “Stomping Tennessee like we did, that’s probably the pinnacle of the last 15, 20 years of confidence in the program.”

“It was an ass-whoopin,” then-special teams coordinator Ray Rychleski said.

“We beat Tennessee all week”

Maryland beat Tennessee before the teams stepped on the field, according to Suter.

Days before the Terps and Volunteers took the field, Maryland offensive lineman Lamar Bryant took the stage at a joint team dinner and “blew [Tennessee’s] best singer away” in a singing competition, according to Suter.

It was one of a series of off-the-field competitions the two programs competed in. On another evening, then-Maryland athletic director Debbie Yow faced off against Tennessee’s athletic director in a “roast battle” in front of the players.

Yow joked that Tennessee’s band wouldn’t have the opportunity to play “Rocky Top” once the two teams took the field — a bold claim given the Volunteers’ stature and recent bowl success.

But Yow was proven right.

“She was very much a prophet at that time,” Friedgen joked.

The Terps’ excursion to Atlanta was filled with lighthearted moments, Suter said. That joviality extended to the practice field, a stark contrast from the previous year’s bowl trip.

“We were really kind of frustrated the year before because we felt like coach Friedgen practiced us a little bit too hard, and we expressed that to him,” Parson said.

Friedgen said he blamed himself for pushing his team too hard in preparation for the Orange Bowl a year prior. The coach recalled a phone call with then-Oklahoma coach Bob Stoops, who told Friedgen he led “two-a-day” practices before bowl games.

“It [was] my first year really having a team go to a BCS bowl, and so I kind of did the same thing,” Friedgen said.

A strenuous practice regimen that overlapped with Maryland’s final exam schedule led to the Terps’ 33-point loss to Florida, according to the coach.

So when his team traveled down to Atlanta the following year, Friedgen made sure he listened to his players’ advice.

When Friedgen’s team took the field days later, they did just that.

Nick Novak knew his kick would split the uprights as soon as his foot made contact with the ball.

With the ball lined up at the right hash, Novak stepped toward the ball and swept his leg through. He sent the ball fluttering through the air with a slight draw toward the “right-middle” of the goalpost, exactly where he always aimed when playing indoors.

“I just remember it feeling very true and perfect as soon as my foot hit it, that kind of feeling where you just know it’s gonna go in,” Novak said.

Novak’s 48-yard field goal was one of three field goals converted by the future NFL kicker on the day. His boot tied the record for the longest kick in Peach Bowl history.

All three phases of the game thrived for the Terps in the win. Maryland’s vaunted defense — led by 2001 ACC Player of the Year E.J. Henderson — held the Volunteers out of the endzone and kept Tennessee’s band silent all evening.

“We played about as well as we could play,” Locksley said.

McBrien scrambled for his first of two rushing touchdowns on Maryland’s opening drive, a play he called “massive” in the grand scheme of the game.

Curome Cox opened up a two-possession lead for the Terps in the second quarter, nabbing a Clausen pass and racing past a hapless Tennessee offense before diving into the endzone for Maryland’s second score.

“Cox did a somersault in the endzone which I wasn’t real happy with,” Friedgen said. “But I’ve talked to him since then.”

The Volunteers never recovered from their early deficit. Henderson shined in the win, impressing his fellow players and coach en route to the most valuable defensive player award.

Henderson also received the Chuck Bednarik award at the end of the 2002 season, an award given to the best college defensive player in the country.

“I never watched the tape of the game until about maybe four or five years ago, I watched it,” Friedgen said. “I couldn’t get over how well E.J. had played.”

With Henderson imposing his will on the game and the score becoming increasingly lopsided, the swathe of Tennessee fans that traveled to the Georgia Dome began filtering out of the stadium.

The exodus started in the third quarter, running back Bruce Perry said. He cracked a smile as he watched the sea of orange and white file out of the building early with the game firmly out of Tennessee’s reach.

“Especially with that type of program and having so much prestige and so much history behind it, for them to have Maryland kicking the living shit out of them and just leave, that brought a smile to my face,” Perry said.

Minutes later, Friedgen and the Terps were hoisting a trophy high above their heads as the vanquished Volunteers retreated to their locker room. It was the apex of a long journey back to prominence for a program Locksley said had dealt with some “lean years” in previous seasons.

It also meant a lot to the program itself. To Perry, his team’s success left an indelible mark on the Maryland football program long after the Terps exited the Georgia Dome and returned home to College Park.

“These teams from 2001 to 2003, these teams are the bedrock and the foundation of what the University of Maryland is today.” Perry said. “We can really say confidently that Maryland wouldn’t be what it is today if those teams didn’t go out there and put in the work.”