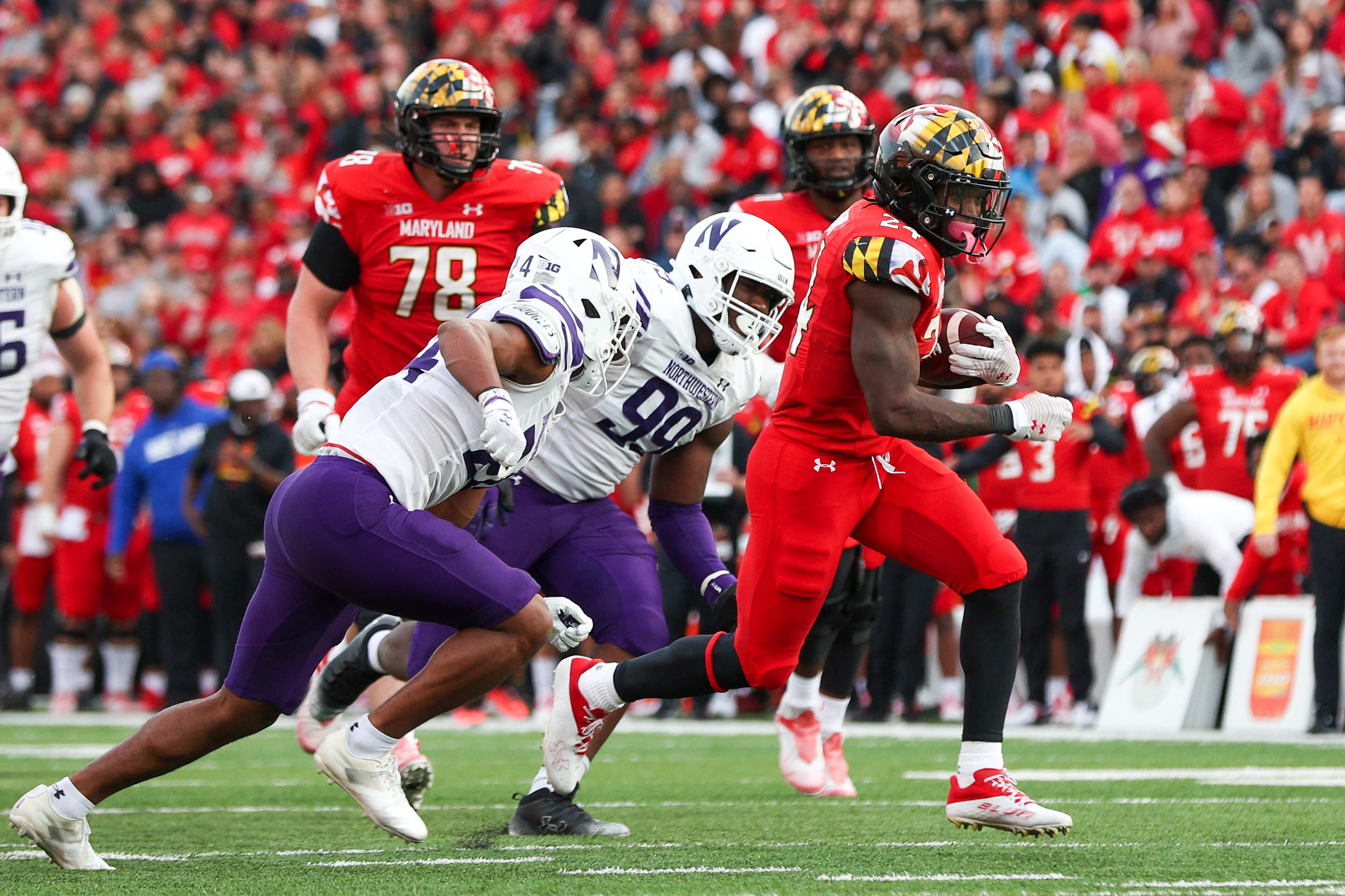 With Taulia Tagovailoa not starting at quarterback for the first time since late 2020, Maryland football turned to Roman Hemby.

They repeatedly looked to the redshirt freshman, asking him to pound into the Northwestern defense for a career-high 24 carries.

His 19th carry of the afternoon proved the most effective. He outraced a host of Wildcats to the end zone for a 75-yard, game-winning touchdown run, a play so electric it got 330-pound offensive lineman Johari Branch to do a cartwheel.

“Roman Hemby came through big, big runs, big-time plays,” head coach Mike Locksley said postgame. “He showed exactly what we talk about, his ability to hit the home run. It couldn’t have happened at a better time for us, we needed it.”

Hemby’s 179-yard, three-touchdown day paced the Tagovailoa-less Terps to a 31-24 win over Northwestern. Maryland’s first win against the Wildcats pushes it to 6-2 for the first time since 2010 and makes it bowl-eligible for the second straight year.

“I can’t really determine how many carries I get in the game,” Hemby said. “But what I do with those carries is all on me.”

The Terps played without Tagovailoa, who didn’t dress for the game with a sprained MCL. But their injury woes extended past that.

Ruben Hyppolite II was inactive for the game, while fellow linebackers Jaishawn Barham and Vandarius Cowan missed their first contests of the season. Gavin Gibson missed his second straight game.

Through one half, the Maryland offense was limited, only averaging 3.1 yards per rush. Hemby only had six carries for 25 yards as the Terps entered halftime down by seven with Northwestern receiving the second-half kickoff.

The Wildcats gained 40 yards on the drive and looked poised to extend their lead. But Dante Trader Jr., who briefly left the game in the first half, intercepted a Brendan Sullivan pass and returned it 23 yards.

Northwestern had already run a specific screen play twice, Trader said, and he recognized the look. But this time, he realized the player set to block him was trying to fake him out and run a route.

“I peeked [at] the quarterback for a second … so I just drove my man,” he said.

Six plays later, Hemby took a handoff 18 yards to the end zone for a game-tying touchdown, his second of the day. His presence helped backup quarterback Billy Edwards Jr., who found himself navigating a crumbling pocket on almost every snap of his first career start.

The Northwestern defense sacked him four times for 27 total yards lost. But he had strong moments, finishing 18-28 for 166 yards and adding 66 more on the ground.

After Hemby’s touchdown, Maryland’s defense forced a punt which set up Edwards to find Rakim Jarrett for a 30-yard touchdown late in the third quarter. That score gave the home squad a 24-17 lead, their first advantage of the afternoon.

“I don’t think there was a defender within 10 yards [of Jarrett],” Edwards said. “I just tried to give a nice little air [and] not throw him out of bounds.”

Jarrett caught a pass on the Terps’ first offensive play and was heavily featured, leading all Maryland receivers in catches, yards and touchdowns.

Edwards and the Maryland offense had a chance to increase their advantage to two scores after driving down to the Northwestern five-yard line. But a bobbled snap on second down and a sack on third down forced kicker Chad Ryland into a 45-yard field goal, which he missed.

The Wildcats promptly drove 72 yards to score a game-tying touchdown. Jakorian Bennett was called for pass interference on the first play of that possession, a consistent theme for Maryland’s cornerbacks.

Junior running back Evan Hull rushed for 119 yards but his contributions paled in comparison to the Terps’ attack.

Hemby powered Maryland into its bye week, one it’ll enter with a bowl berth in hand and hope to exit with a healthier roster.

“The bye couldn’t come at a better time,” Locksley said. “We’ll get some much-needed rest.”