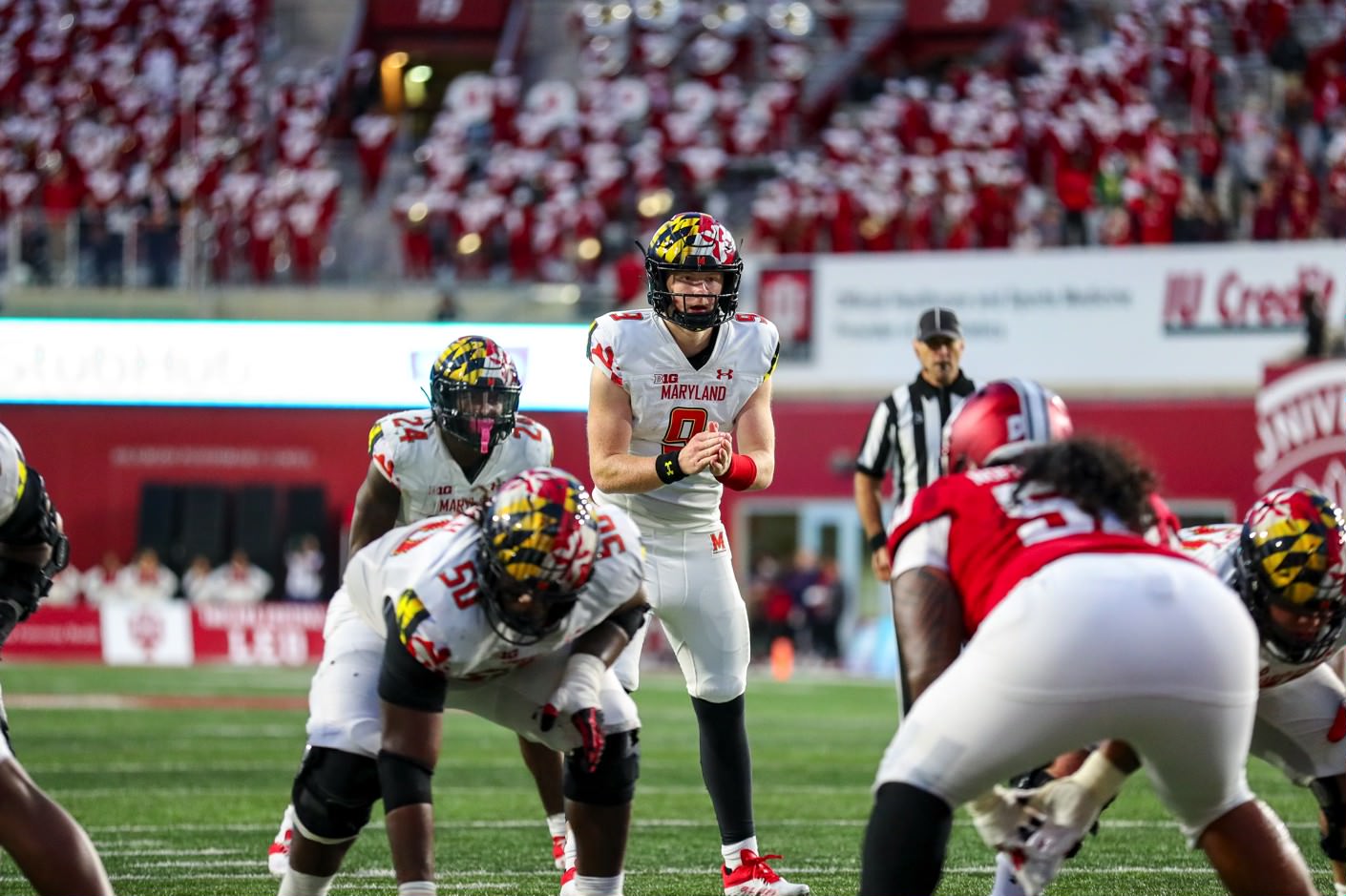 Billy Edwards Jr. often stands 30 yards ahead or behind of the play when he stalks Maryland football’s sideline during games. Despite that distance, his attention never wavers from the on-field action.

Maryland football’s backup quarterback listens to the play call as it’s relayed to starter Taulia Tagovailoa and scans the defense from his vantage point — acting as if he’s playing. He keeps his arm loose during television timeouts, constantly staying ready to enter the game.

Even though he hasn’t started yet this season, Edwards has made four relief appearances, most recently when he led a comeback win over Indiana last weekend after Tagovailoa reaggravated an MCL sprain.

The Terps’ starter is a game-time decision for Saturday’s game against Northwestern, opening up the possibility that Edwards could make his first career collegiate start.

He transferred to Maryland in part because of past connections with coach Mike Locksley and a chance to be the team’s featured quarterback after Tagovailoa leaves.

Edwards may step into that role on a part-time basis earlier than anyone anticipated, but he’s ready, prepared by a mental discipline and consistent preparedness that extends back to his freshman year of high school.

Lake Braddock head coach Mike Dougherty first met Edwards in 2017, when the red-headed “five-foot-nothing” eighth grader introduced himself by saying he planned to play quarterback in Division I football.

Edwards spent his freshman year at the school in Burke, Virginia, sitting behind senior quarterback Jack Darcy but surprised Dougherty in summer workouts with how well he threw the ball and impressed him with his vigor in learning the playbook.

He ate lunch with Lake Braddock’s coaching staff almost every day during his freshman and sophomore years, trying to learn the offense, Dougherty said. He went so often that the coaches would sometimes turn off the lights and lock the doors to the office just to get a break.

“There were some days where I just wanted to eat my sandwich,” Dougherty joked.

When Darcy graduated, Dougherty made the choice to hand Edwards the keys to the Bruins’ offense. The process was intimidating, Edwards said, but the senior class at the time helped guide him through it.

“The older guys did a good job as far as instilling confidence in me and kind of taking me under their wing,” he said. “Keeping me relaxed, keeping me level-headed, my head on straight.”

He erased any lingering doubts within himself or others during his first few snaps.

“From the very first series of his sophomore year, we knew he was going to be special,” Dougherty said.

Edwards threw for more than 6,000 yards and a program-record 67 touchdowns. In his junior year, he threw for 2,677 yards and 31 touchdowns, meriting First Team All-Region honors and helping Lake Braddock soar to a 10-3 record.

He started his college career at Wake Forest but was buried on a depth chart that featured six quarterbacks. With no feasible path to playing, he looked around for a new home and settled on College Park.

Maryland made sense for multiple reasons. Edwards admitted Tagovailoa’s dwindling eligibility played a part in the decision but insisted the main draw to the school came from his familiarity with the scheme.

His older brother, Kyle, walked on at quarterback for two years under Locksley at Alabama and is now a graduate assistant on Maryland’s staff.

Kyle Edwards’ presence on the roster gave his younger brother the chance to attend camps in Tuscaloosa, Alabama, where he sat alongside future NFL quarterbacks such as Jalen Hurts, Mac Jones and Tua Tagovailoa.

“To work with them in the drills and throw next to them … those two or three summers that I went down there for those camps were very cool,” Edwards said.

The “eye-opening” experience also let him meet with Dan Enos, Maryland’s current offensive coordinator and quarterbacks coach who was then Alabama’s quarterback’s coach. Edwards also learned from Mike Miller, the Terps’ current tight ends coach and then a graduate assistant with the Tide.

That familiarity led him back to Locksley, Enos, Miller and the Terps. Locksley said the team won’t have to change the offense to accommodate Edwards if Tagovailoa is out, noting the two are very similar players.

“He throws it accurately. He’s smart, reliable,” he said. “We have the utmost confidence in him as a staff and as a team that he’ll be able to come in and get the job done.”

For Edwards’ part, he’s keeping his preparation the same. He learned a long time ago, on practice fields and during lunchtime film sessions that the way you prepare during the week defines how you’ll play during the game.

From Monday to Friday, he’ll prepare himself as if he’s going to move from his spot 30 yards down the field and into the heart of Maryland’s offense.

And on Saturday, his intensity will remain the same whether he’s glancing at a defense before taking a snap or studying it from nearly half a field away, waiting for his number to be called.