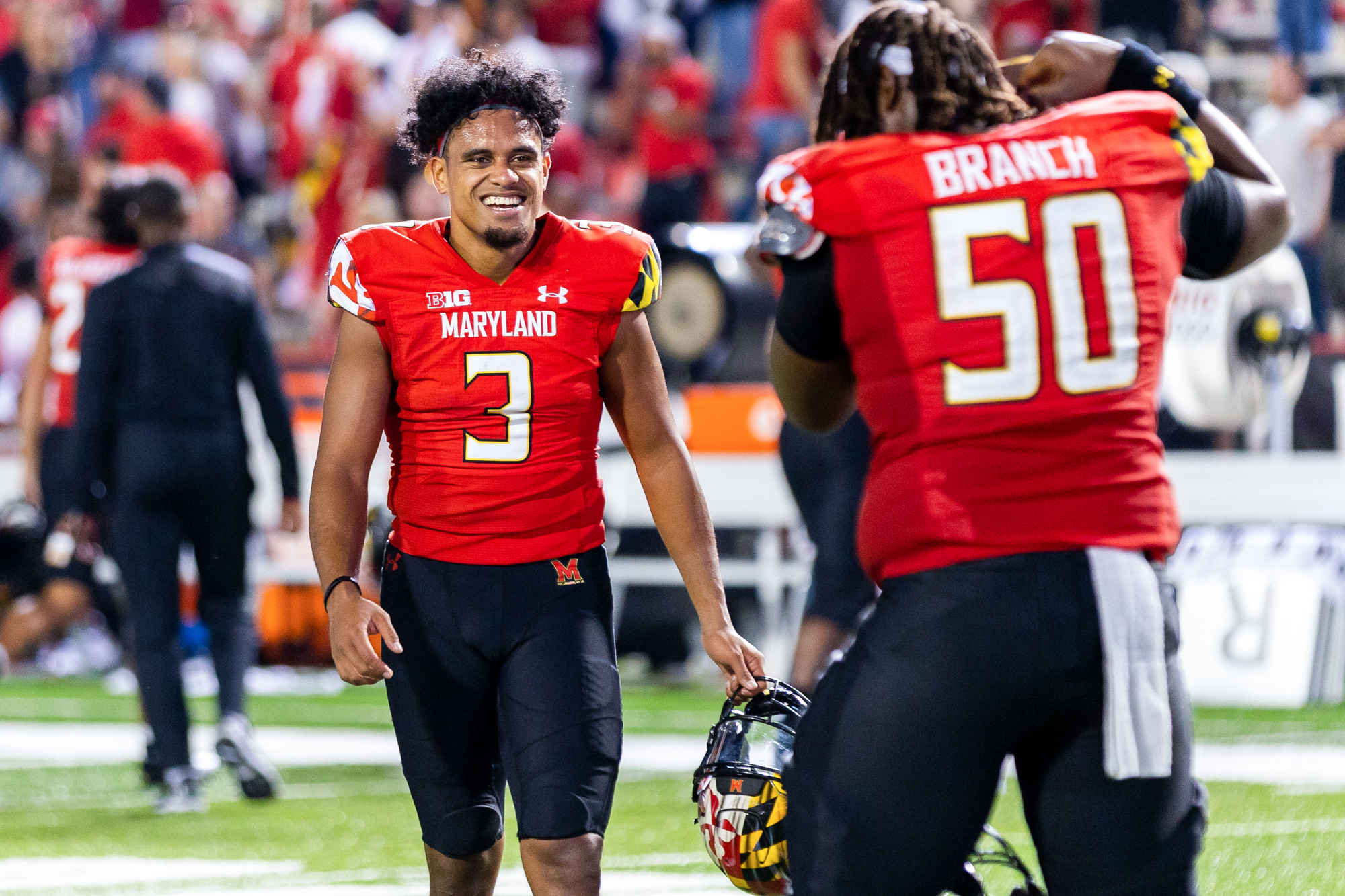 Taulia Tagovailoa leaned close to the podium and smiled when a reporter asked him if Michigan State’s strong defensive front created any fear for the Maryland offense.

“Intimidation, like scared?” the quarterback said, seemingly puzzled by the question.

After the reporter clarified, Tagovailoa spoke with admiration for the Spartans’ defense but expressed confidence in the Terps’ ability to endure the formidable pass rush and keep him upright.

The Terps do face an imposing challenge against a Michigan State defense that’s tied for the Big Ten lead with 12 sacks. Tagovailoa heads into Saturday’s matchup with the Spartans battered after exiting last week’s game against Michigan with what head coach Mike Locksley called rib and knee injuries.

So far, Locksley’s stayed quiet on whether his starting quarterback will suit up against the Spartans, calling him a game-time decision — but Tagovailoa made his intentions for the game clear.

Despite that injury and the Spartans’ pass-rushing prowess, Maryland’s quarterback’s quiet confidence is warranted. His offensive line’s experience and his own athleticism have made for a season where the Terps’ offense only allowed one quarterback hit, per Pro Football Focus data, the lowest in the Big Ten. Quarterback hits do not include sacks.

To adjust for how often teams passed the ball and put their quarterbacks in positions to get hurt, The Diamondback looked at a Pro Football Focus statistic called “allowed pressure opportunities,” or pass blocking snaps that exclude penalties and spikes.

We added those opportunities together for each player on each Big Ten team to give us the total number of opportunities a team’s player had to allow a hit on the quarterback. The Terps still ranked top in the conference.

[Injuries limited VanDarius Cowan in the past. Maryland football gave him a ‘fresh start.’]

Those low hit numbers come even though the Terps are just middle-of-the-pack in the percentage of passing plays where they allow pressures.

The reasons for that disparity are wide-ranging.

One comes from Tagovailoa’s feet. He’s scrambled six times when facing pressure, the second most in the Big Ten.

That skill allows him to extend plays. Tagovailoa’s average time to throw on plays with pressure is 4.28 seconds, the third highest in the Big Ten among quarterbacks with at least 50 total dropbacks.

“He just wants to make a play,” running back Roman Hemby said about Tagovailoa after the Terps’ win over SMU. “So whether that's with his legs, or whether that's throwing the ball, he's gonna get it done, and that's why we trust him so much.”

Maryland’s offensive line’s ability to communicate with each other, a manifestation of their cohesion, has allowed them to effectively pick up blitzes. Tagovailoa has only been sacked once on blitzes and has the most time to throw among Big Ten quarterbacks with at least 50 total dropbacks.

He’s used that time to shred opposing defenses. The Terps’ quarterback ranks third in yards per attempt, third in completion percentage and fourth in passer rating among Big Ten quarterbacks with at least 50 total dropbacks.

The Wolverines blitzed Tagovailoa nine times a week ago. On those plays, Tagovailoa completed 75 percent of his passes for 114 yards. His 14 passing yards per attempt ranked eighth among FBS quarterbacks with at least 20 dropbacks in week four.

“Michigan, they had exotic looks on third down … I think a lot of that comes from preparation,” Tagovailoa said.

The Terps altered their weekly training schedule, he said. In previous seasons, they analyzed blitzes on Wednesday along with third-down plays. This year, they’re “getting ahead,” he said, talking about them as early as Monday.

“It’s a good feeling knowing that … the [offensive line] is all on the same page,” he said. “They have a lot of experience.”

Locksley outlined a variety of ways playcallers can mitigate pressure Thursday, including screen passes and keeping additional players into the protection to help out the offensive line with pass rushers.

Through four weeks, Enos and the Terps have achieved each of those. Tagovailoa ranks second in the Big Ten in screen passes. Tight end CJ Dippre and Hemby rank fourth and sixth among their respective positions in pass blocking snaps.

The Terps’ passing offense boasts an experienced offensive line, a skilled play caller and a quarterback with the physical ability to extend plays when the first two factors can’t eliminate pressure.

Those three skills alongside an incendiary group of wide receivers give them reason to not only avoid intimidation — but to intimidate others.

CORRECTION: A previous version of this article misspelled Wolverines. This story has been updated.
Please support our journalism by donating to The Diamondback.
Categories:
Tagged: