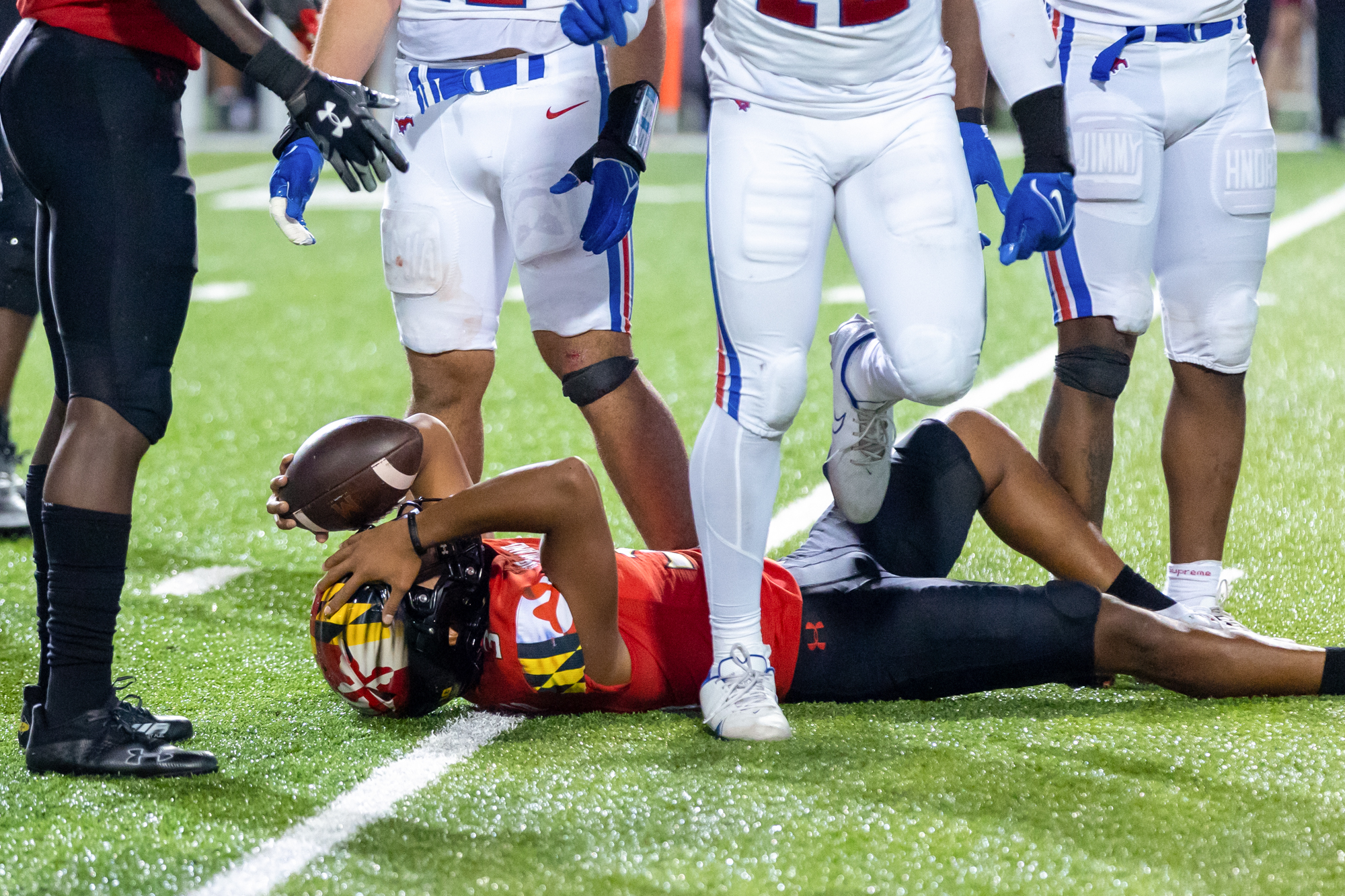 Maryland football has long struggled in matchups against the Big Ten’s elite. But Saturday against Michigan, the Terps kept the game close — scaring a talented Wolverines squad in the process.

The Terps’ offense performed admirably, totaling nearly 400 yards of offense and scoring 27 points against a defense that hadn’t allowed more than 10 points coming into the game.

But the Terps left plays on the field that could have swung the outcome if converted.

Maryland’s best offensive players didn’t match their counterparts on the Michigan sideline. While the offense played relatively well, the star production inequity paired with a few untimely mistakes kept the Terps from pulling off an improbable upset.

“The disappointing thing is that we talked about what it would take to win up here, which was to give ourselves a chance getting this game into the fourth quarter … we did that but we didn’t make the plays,” coach Mike Locksley said. “And it starts with coaching, it starts with our best players making the plays when they’re there to be made.”

Quarterback Taulia Tagovailoa started strong, completing 11 of his first 15 passes. But his 16th attempt, intended for wide receiver Jacob Copeland, landed in Michigan cornerback DJ Turner’s arms. Replays indicated the cornerback may not have cleanly caught the ball, but the play was not reviewed.

Locksley said after the game that the team felt at the moment the play was an interception. He noted Copeland should have “shaved” off his route more, putting his body between the ball and the defender.

Copeland remains part of a wide receiving room that CBS Sports ranked No. 3 in the nation coming into the season. But he, along with Dontay Demus Jr., Rakim Jarrett and Jeshaun Jones failed to break out against Michigan.

The Florida transfer finished with four catches for 52 yards while Jarrett, Demus and Jones combined for eight catches for 72 yards.

“When we don’t have success on offense, it’s not necessarily because of something that the other team is doing, it’s usually our execution,” Locksley said. “We’ve got to execute at a higher level.”

Tagovailoa’s first pick ended a Maryland drive that had gone 51 yards and could’ve helped extend the lead to multiple scores. The Terps’ offense slowed after that mistake, going four drives without scoring and wasting a third quarter where the defense limited Michigan to just 84 yards and no points.

That strong defense didn’t extend into the final frame. Michigan scored a touchdown 44 seconds into the quarter and another with three and a half minutes remaining that ultimately sealed the outcome.

The latter score, a long run by Corum, was the second long run the Terps gave up due to poor gap control, Locksley said.  Corum finished with 243 yards, more than all of Maryland’s rushers combined.

[Maryland football battles but ultimately falls to No. 4 Michigan, 34-27]

His big day could have been overcome with similar production from the Terps’ playmakers.

That group showed flashes of brilliance, including on a fourth quarter touchdown drive with one of Tagovailoa’s best plays — rolling to his left before feathering a touch pass that let Corey Dyches rumble for 44 yards down the sideline.

Michigan kicked a field goal to go up eight points, giving the Maryland offense and its quarterback just under six and a half minutes to tie the game.

But on the second play of the drive, Tagovailoa attempted an ill-advised heave into double coverage that was tipped and picked off for an “egregious” interception, per Locksley.

The interception happened because Tagovailoa didn’t confirm the coverage, an issue he’s had in the past, Locksley said.

“He continued to fight and give us a chance, but like I said … our best players, we’ve got to play at our best when we face teams like Michigan,” Locksley said.

Maryland’s quarterback played hurt for much of the game, especially after taking a big hit on a scramble early that ripped his helmet off. The second interception was his last pass of the game as the Terps removed him due to knee and rib injuries, Locksley said.

“He wanted to go but obviously his body was limiting him,” right guard Spencer Anderson said.  “He showed the heart that we expected.”

Tagovailoa and the rest of the offense played well against an extremely talented Michigan defense, but the plays they didn’t make and the ones Michigan’s stars did turned what would’ve been a program-defining win into a more modest result.