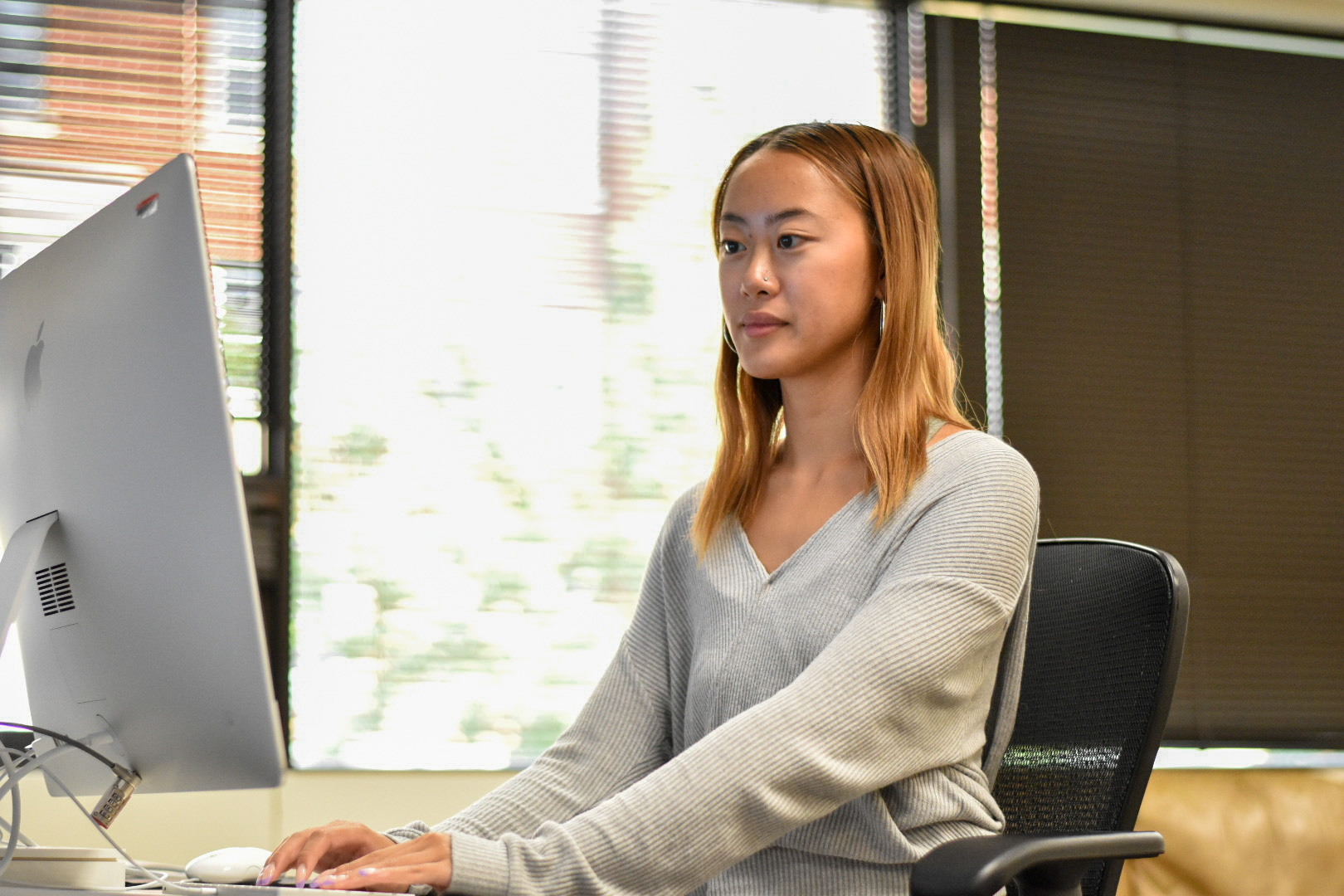 Amanda Vu, a junior who has a job in the Asian American studies program, works at a computer on Sept. 17, 2022. (Autumn Hengen/The Diamondback)

Student employees at the University of Maryland are expressing mixed feelings after the administration announced it would increase hourly wages to $15 in January 2023.

The change comes after continuous advocacy for an increase in hourly wages for students, non-students and contract workers from the university’s local chapter of United Students Against Sweatshops. Union-represented employees have been making $15 an hour since spring 2022.

Chuk Nwobi, a senior public health science major, is currently looking for an on-campus job. He applied to the athletics and IT departments, which were only offering $12.50 an hour at the time.

While Nwobi considered a better paying off-campus job, he was concerned those jobs wouldn’t value his academic goals and the commute to work would be a conflict.

Campus departments have control over paying students at a higher rate based on factors such as seniority, wrote the university’s human resources team in an email. In the email, they stated departments set their own guidelines for responsibilities, work hours, location and wages, but the minimum student wage will be $15 in 2023.

Kamari Buggs, a sophomore enrolled in letters and sciences, wasn’t aware a wage increase for student employees was being discussed. He currently works on the campus as a program assistant for the Department of Resident Life.

Buggs said it’s his first on-campus job, and he was originally going to make $13 an hour. With the wage increase, Buggs is excited to make more money in the near future. He thinks the change was necessary, especially because several off-campus jobs have already offered to pay more than $13 hourly.

“As students, we should be able to have the opportunity to make money on campus just as well as off,” he said. “Especially with a lot of the costs that being on campus as well as going to classes bring.”

The wage increase will be enough for now, Buggs said, but he thinks the university will need to increase wages again in the future.

Isaac Dubrawsky, a senior computer science major, said the university could be doing more for student employees and chose not to return as a teaching assistant this year.

“I’m happy to hear that the university is essentially doing the bare minimum for students,” he said.

Dubrawsky thinks the university simply caved to student pressures because of the frequent USAS campaigning. He said the administration should do more to alleviate students’ stress about finances.

“The university runs on student workers, whether that’s the people who swipe you in at Eppley or the people that professors regularly rely on to grade papers, to hold office hours, to teach alongside them,” he said.

The computer science department pays undergraduate TAs $14 an hour for about 10 hours each week. Dubrawsky turned down the offer to return because he knew another job off campus would be able to pay him more.

Now, he works as a software engineering intern that pays much more competitively. He didn’t expect the university to pay the same as his internship, and he would have turned down his old position on campus for any off-campus job that paid $20 an hour.

Amanda Vu, a junior psychology and community health major, was happy with the wage increase. Last year, Vu worked as a community assistant for Resident Life, but now she works for the Asian American studies program. Still, she thinks more work can be done for workers’ conditions and equal treatment between workers.

She said other student employees’ supervisors were micromanaging tasks and breaks, leaving no room for employees to breathe.

“The lunch breaks would only be 10 to 15 minutes, which is pretty sad because they work really long hours,” Vu said.

Vu said there needs to be more open communication lines between supervisors and student employees across all departments. She said the increase in student wages was from the pressure of student workers organizing across the campus to make the new wage a reality.

Some employers may be concerned with the additional costs of the wage increase, but Nwobi thinks they should be prepared because the county already had plans to increase the minimum wage to $15.

“They should be considerate that a lot of the students working in these positions come from very diverse backgrounds and that job may be their way of paying for college,” he said.

CORRECTION: A previous version of this story and its photo caption mischaracterized the Asian American studies program as a department.