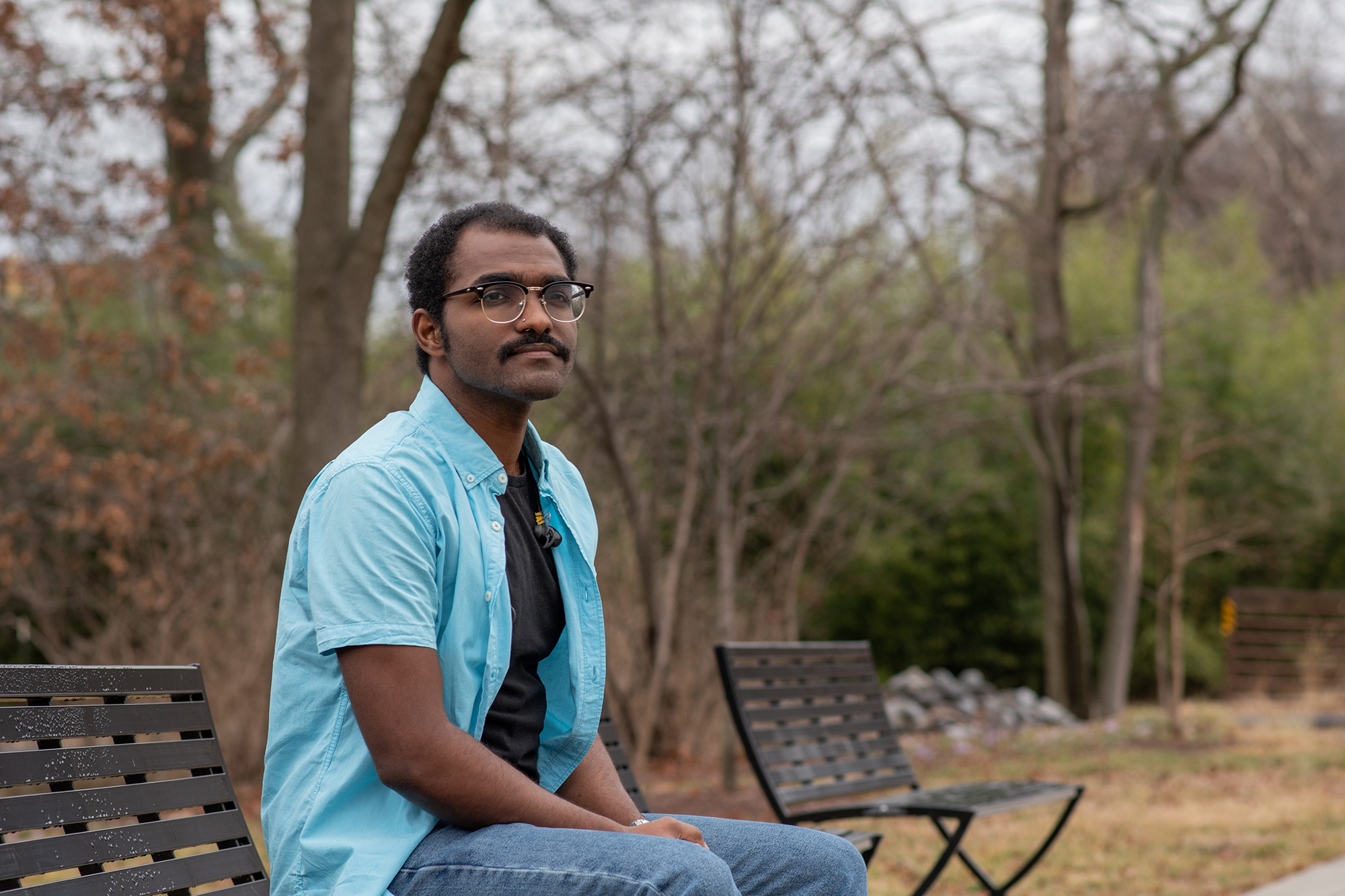 Jan-Michael Archer, a public health doctoral student who serves as FSE's president, poses for a portrait outside of the Iribe Center on Feb. 22, 2022. (Autumn Hengen/The Diamondback)

When Jan-Michael Archer started his doctorate program at the University of Maryland four years ago, he felt isolated by the lack of community among the graduate students. But after he talked to his peers, he realized they were all silently struggling much like himself.

Archer, an environmental health doctoral student, was elected as the FSE’s new president this year with 90 percent of the vote, the organization announced in its newsletter Aug. 30.

In the past year, Archer said he has been very active in the organization. He was the vice president of the diversity and inclusion committee, and he updated the graduate assistant wellness and grievance survey.

Many committee heads of FSE believe Archer is a good fit for this role.

Daniel Smolyak, a computer science doctoral student and interim vice president of the FSE’s government relations committee, said Archer is a great leader and beacon within the organization, because he helps advocate for laborers’ rights.

“I think he has the perfect experience for an issue like this, for working on grad labor issues,” said Samuel DiBella, the co-chair of the media and organizing committees. “I have every faith in him.”

Archer said his main goal as president is to improve the quality of life not only for graduate assistants but also all graduate students. He believes the issues graduate workers face, such as the lack of a living wage, would be better addressed or resolved if workers had collective bargaining rights.

“Having the right just establishes the designated process for us to be able to go through our own grievances with labor conditions,” Smolyak said.

Currently, the University System of Maryland follows a meet and confer policy, which gives GAs the opportunity to voice their concerns to administration with a labor representative present. Although the university will give serious consideration to the issues GAs present, the university has final authority over all decisions.

The academic pursuits of graduate students are already challenging, and having to defend their humanity and right to be treated like any other labor adds to the pressure, Archer said.

“What collective bargaining provides is an opportunity to be counted and be respected for the work that we do,” Archer said.

Additionally, graduate assistants and their supervisors have to complete statements of mutual expectations, which are signed agreements that set guidelines for both sides of the assistantship. But Nate Beard, an information studies doctoral student, thinks the university is not going to enforce these contracts.

Although the fight for collective bargaining is far from over for FSE, the organization wants to focus on organizing and growing its membership this year while also helping graduate workers better their working conditions with their available resources.

Archer said the organization is looking to ensure that there is an FSE member in every department of campus. FSE wants to broaden its reach and have a physical presence on campus, he said.

Beard, the alliances committee chair, is working to bring in different groups of workers and build a coalition to enforce a better, safer and fairer workplace on campus.

“We deserve these rights, and I think we’re stronger together,” Beard said.

Until the legislative session begins in January 2023, the organization wants to work on a smaller scale to improve what they can about working conditions without collective bargaining.

FSE is looking to work directly with departments to make changes at the legislative level. The organization also wants to show more support for other labor groups on campus, plan protests and put up flyers to make visible the issues that many university workers struggle with.

“Labor groups, unions, are only as effective and strong as their membership makes them,” DiBella said.