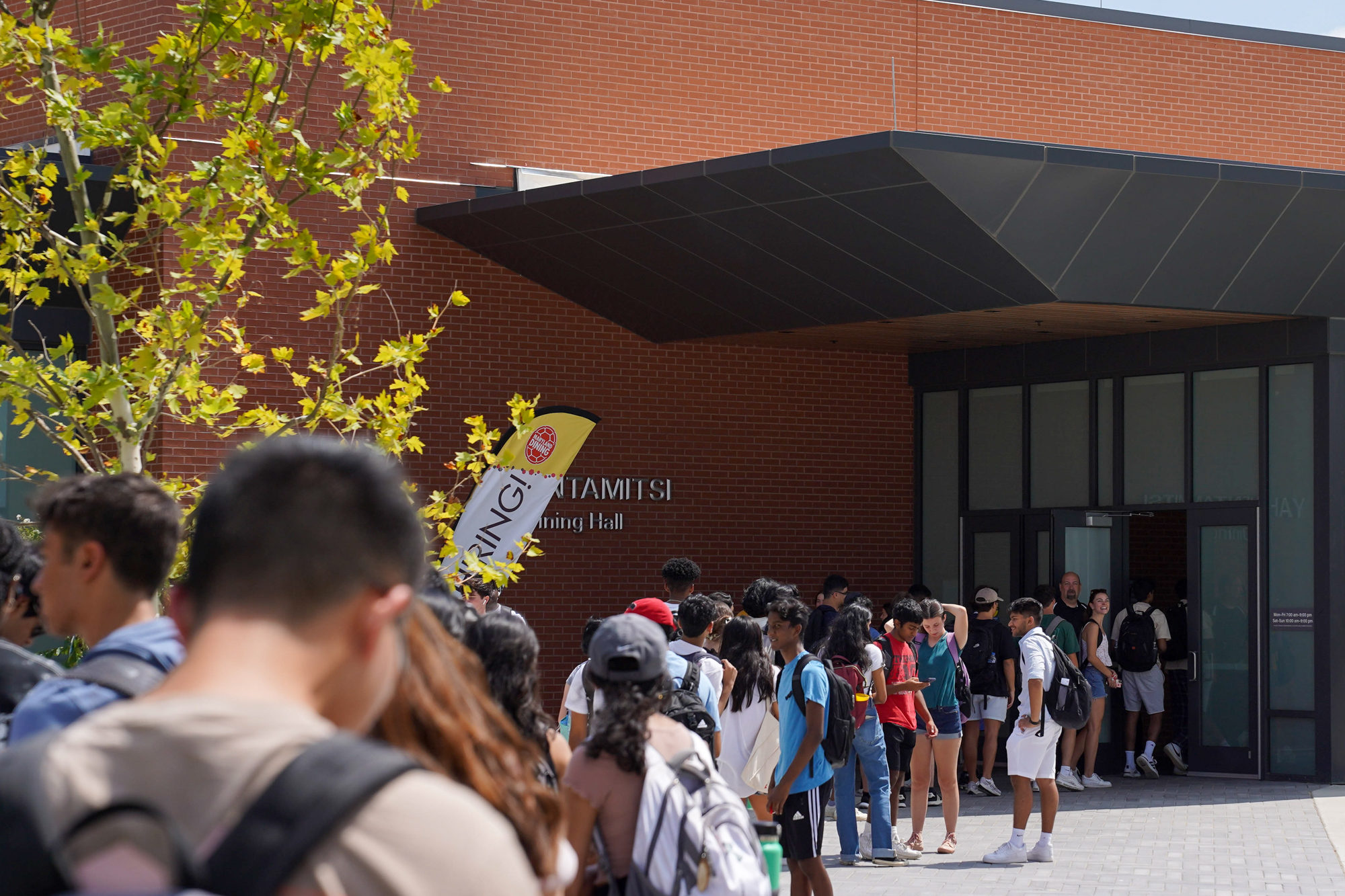 University of Maryland students have been flocking to the new Yahentamitsi Dining Hall in search of new food options.

The new dining hall is named to honor the Piscataway, who are indigenous to Maryland. Yahentamitsi means “a place to go eat” in the Piscataway people’s spoken Algonquian language. The dining hall replaced the North Campus Dining Hall and opened this September in the Heritage Community alongside recently opened Johnson-Whittle and Pyon-Chen halls.

Divine-glory Akinsola, a freshman computer science major, always makes the walk from her dorm, so she can have breakfast at Yahentamitsi.

“It’s so good, especially the omelet,” she said. “I personally prefer the bacon, peppers and the onions with the tomato. It’s beautiful.”

She said she enjoys the experience of the dining employees making food in front of her. Akinsola also enjoys the pancakes and potatoes served throughout the day.

Malachi Gaines, a junior public policy major, said the lines at Yahentamitsi are very long during rushes. Before the dining hall closed one night, he saw the line extended outside of the dining hall toward Johnson-Whittle Hall.

Yahentamitsi is typical for a diner, Gaines said, and is better than 251 North, but not as good as the South Campus Dining Hall.

Gaines rated Yahentamitsi a six out of 10 on a good day. But freshman engineering major Christopher Labella considers the food at Yahentamitsi high quality.

He said the newest dining hall is the best he’s experienced so far, even compared to the South Campus Dining Hall, but is skeptical the quality and variety of options will last.

Like other dining halls on the campus, including the former North Campus Dining Hall, Yahentamitsi offers a gluten free station, vegan dishes, pizza and pastas. It also has unique offerings: a grill station with new sandwiches, burgers and quesadillas, a Latin food station and an area for students to craft salads and Mezza.

Gaines, a resident assistant in Hagerstown Hall, said staff would sit together during training week. He said one day he noticed sausage in a dish he chose after he started eating the food.

“The placards that say what the dish was were somehow arranged in a way that would imply that it was a mushroom dish, not a dish with sausage in it,” he said.

Gaines said it would be a serious accusation to make without knowing the meat was actually pork, because a friend who also had the dish couldn’t eat pork due to her religion.

“If one student did, who knows how many others did it unknowingly,” Gaines said.

In the past, he’s seen mislabeled food at other dining halls. Gaines said he would like to see a new labeling system that’s harder to move around. When people reach back to get food, the labels can be pushed around, he added.

He said dining workers put a lot of effort into their cooking, so it’s a step up from other food he’s had in the past.

Despite other students’ worries that the dining hall will decline in quality in the coming weeks, Britto said he is positive it’ll maintain the quality of the food throughout the semester.

“They never really change the menu. They do make different stuff depending on the day of the week, but it all comes back,” he said.