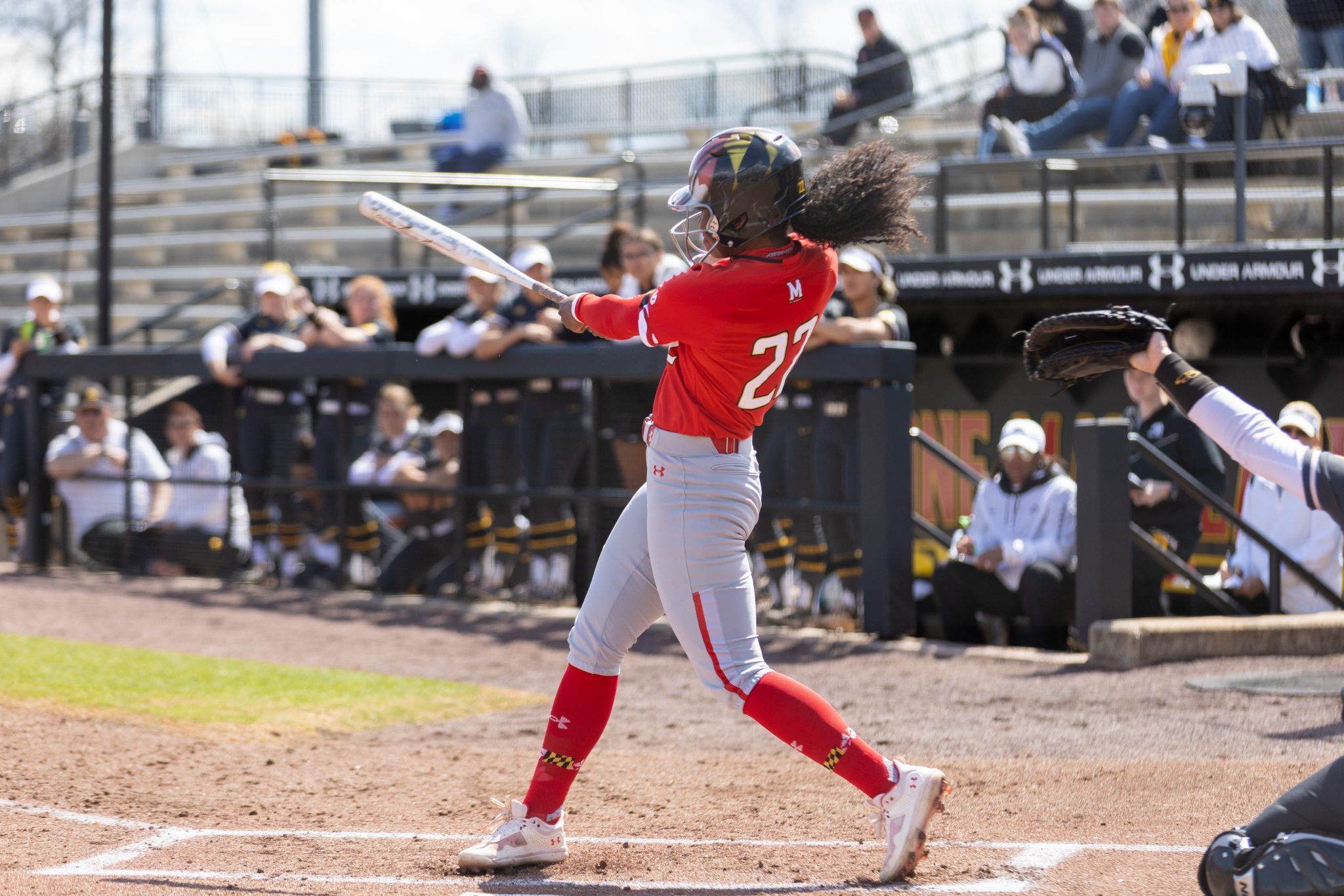 Following a commanding six-run victory over Michigan State in the first round of the Big Ten tournament, Maryland softball followed up its strong performance with a showing that ended its season in the next round — a 7-0 defeat at the hands of Michigan.

The Terps walked off Secchia Stadium in poorer spirits than the day before, as their 2022 campaign ended on a sour note.

The two Big Ten tournament games represented the entirety of the season for the Terps — inconsistent play that led to a volatile year.

“At the end of the day I think we got better, I think we improved as a program … From a programming standpoint, I think everybody’s happy with what we’ve done and accomplished,” coach Mark Montgomery said.

Maryland’s 2022 season was its best of recent memory. The Terps finished 29-23, a 10-win increase from 2021, and their highest win total since 2013. Additionally, the Terps won their first ever Big Ten tournament game.

Maryland struggled early on in one-run games, earning just a 13-14 overall record through the first 27 games of the season. The Terps were just 2-8 in such contests prior to conference play.

“We stumbled a few times earlier in the year, lost some games I don’t think we necessarily should have,” Montgomery said.

Suddenly, a switch flipped for Montgomery’s squad. Maryland got out to a blazing 5-1 start in conference play, equaling its best Big Ten start since 2018.

On April 10, Maryland won a tightly-played contest against Purdue, 2-1, clinching the series win. The victory was the Terps’ third consecutive series win against Big Ten opponents, the first time Maryland won three straight Big Ten series at any point since its switch to the Big Ten in 2015.

The Terps finished off their season going 7-6, showing more signs of the squad from non-conference play as opposed to the start of Big Ten play.

Inconsistency down the stretch led Montgomery’s squad to a five-seed in the Big Ten tournament, its highest since joining the conference.

“Definitely a step in the right direction, but we’re going to start holding ourselves to higher standards in terms of what we accomplished,” Montgomery said.

Maryland accomplished its most successful season under Montgomery and the Terps will bring back a number of key contributors for their 2023 season.

Outfielder Jaeda McFarland entered the season with high expectations following her freshman campaign that saw her win Big Ten Freshman of the Year.

McFarland struggled to find an early rhythm at the plate as she collected just one hit in her first five games. The sophomore followed that cold stretch with a hot one — delivering a base knock in eight of her next nine games to bump her batting average up to .304.

Despite the slim drop in production, McFarland’s above average bat and defense helped the Terps reach the quarterfinals of the Big Ten tournament.

“A little bit of a sophomore slump … It was still positive, and she’s such a dynamic player,” Montgomery said. “There’s still so many magical moments that she had and made [McFarland]-like plays.”

On the pitching side, the Terps’ arms struggled with consistency at times, similar to the bats.

Schlotterbeck started off strong, achieving a sub-two ERA after six outings. However, her ERA skyrocketed over four following Maryland’s first home game of the season in mid-March.

Schlotterbeck allowed just one-run in seven innings April 14 against Michigan, dropping her ERA to 3.14, but struggles over her final seven appearances saw her finish with an ERA of 3.71.

In addition to her outings in the circle, Schlotterbeck recorded 90 at-bats at the plate. Her average hovered around the mid-200s for most of the season, and she finished with a clip of .222.

“For somebody who we were asking to hit and pitch sometimes multiple times on a weekend, I think it taxed her,” Montgomery said.

Maryland’s other star in the circle was junior Courtney Wyche. She excelled in her second season for the Terps as she led the team with a 1.95 ERA, a 1.25 WHIP, 11 complete games, 139 strikeouts and a .217 batting-average-against. All of those numbers were career highs for Wyche.

After her third start of the year, Wyche’s ERA sat at 3.60 — its highest mark of the season. The pitcher dominated over the remainder of the schedule as she finished with a sub-two ERA.

Over a three-start span from April 19 to April 24, Wyche was awarded Co-Pitcher of the Week honors in the Big Ten — the first of her career. Wyche collected wins and went the distance in all three starts, pitching to a 0.67 ERA.

“[Wyche] was figuring out how to be herself all the time … She was learning mentally how to push through some of those [fatigued] moments,” Montgomery said. “I was so proud of her and her growth and development as a player.”

Wyche, Schlotterbeck and McFarland were key to the success of the Terps in 2022. With all three returning next season, alongside other contributors and incoming pieces, Montgomery has a positive outlook on the future of his program.

“Let’s take all the good that we did and continue to do those things well, and then let’s take some of the things we didn’t do as well on and need to get better at, and let’s start to learn and get better at those,” Montgomery said.