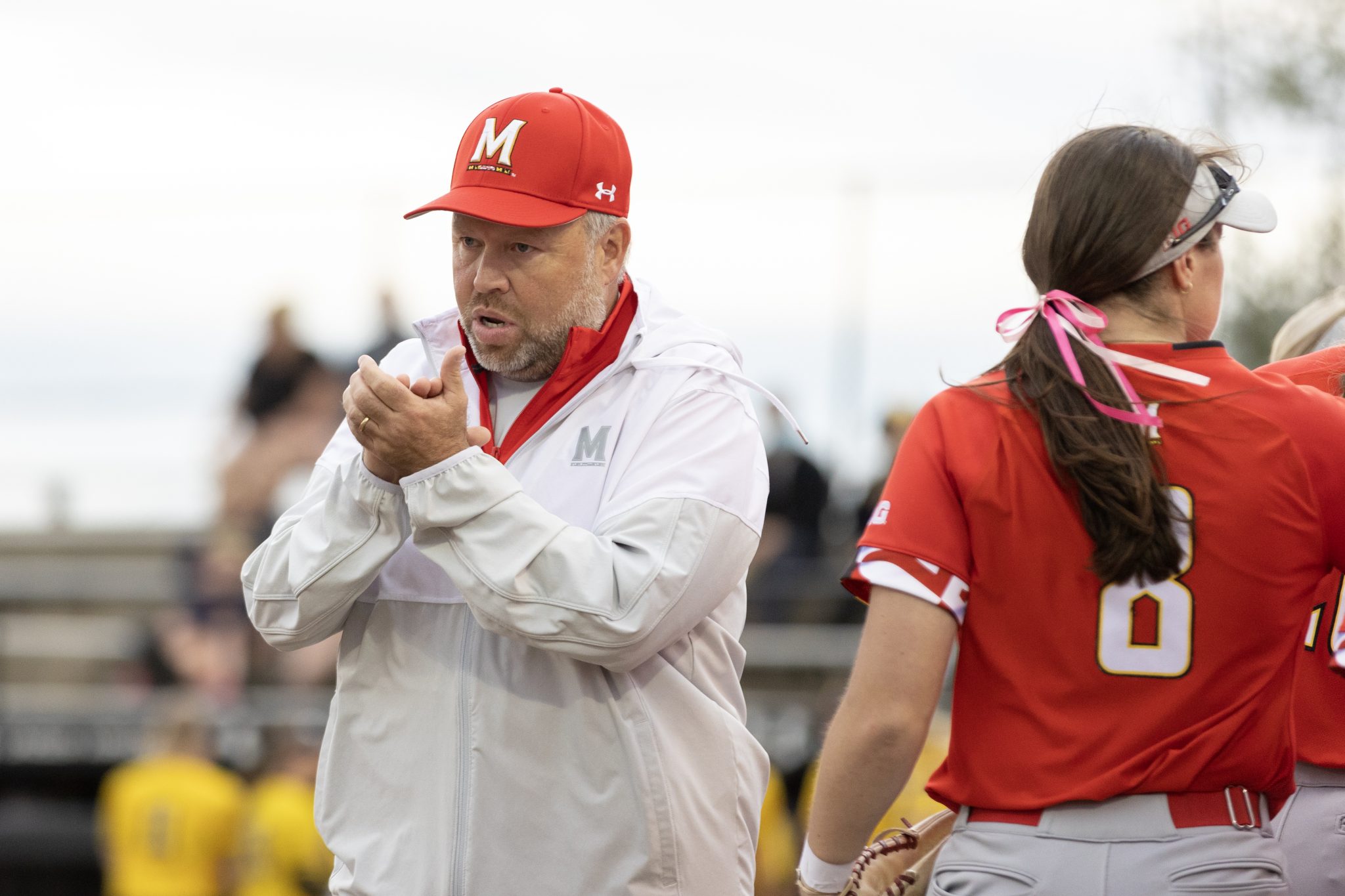 Maryland softball coach Mark Montgomery with his team during the Terps’ 5-1 win against Michigan on April 14, 2022. (Cam Andrews/The Diamondback)

With his squad down seven runs in the bottom of the sixth inning, coach Mark Montgomery made a couple of defensive replacements to get a pair of seniors one last moment on the diamond.

Regan Kerr and Katie Dustin stepped onto the field for the first time of the game, with the Terps just three outs away from elimination.

Senior Caitlyn Koenig pinch-hit in the top of the seventh — just her sixth at-bat of the season.

Montgomery understood the reality of the situation and gave his seniors one final moment in their careers as Maryland softball fell to Michigan, 7-0, eliminating them from the Big Ten Tournament.

Just four batters into the game, poor Maryland defense put it in an early deficit.

Trinity Schlotterbeck found herself in a jam in the bottom of the first inning after she allowed a leadoff hit-by-pitch and a single two batters later. That brought Hannah Carson up to bat with two on and just one out.

Carson popped the first pitch of the at-bat into foul territory in left, a difficult but possible play for the Maryland defense. Ruby Butler sprinted from short and tracked the pop-up down but was unable to corral the catch. The ball bounced out of her glove and kept Carson’s at-bat alive.

On a 1-2 pitch, the Michigan catcher hit a sharp grounder to Butler, who sailed her throw home wide of Kiley Goff. The ball skipped along the backstop, allowing both Wolverines on base to score.

After momentarily righting the ship with a one-two-three second inning, Schlotterbeck cratered and allowed a five-spot in the third.

Kristina Burkhardt led off the frame with a shot into the left center gap, putting Jaeda McFarland on the move. McFarland dashed over from centerfield and nearly made a diving grab, but her outstretched arms came inches short.

Burkhardt wound up at third with a triple and later scored on an Audrey LeClair groundout.

Later in the inning with two outs and a runner on, Taylor Bump crushed a 2-2 pitch over the wall in left field for a two-run blast. Three batters later, Annabelle Widra lined a triple down the right field line, bringing home two more Wolverines in the frame to blow the game open.

Widra’s three-bagger signaled the end of Schlotterbeck’s night in the circle as she was relieved by Haley Ellefson.

With a lead for almost her entire outing, Michigan ace Alex Storako kept the Maryland offense silent in her five innings of work.

After she got lit up for 5 runs in 4 ⅔ innings in her lone start against the Terps this season a month ago, Storako breezed through her early portions of the game in the circle, striking out five and allowed just two hits through the first three innings.

She showed no signs of slowing down in the top of the fourth as she retired the Terps in order. Between the first and the fifth innings, Storako sent down 12 straight Maryland hitters.

After throwing a complete-game gem in the first round of the Big Ten Tournament on Wednesday, coach Mark Montgomery sent Courtney Wyche into the circle to start the fifth in relief of Ellefson with his squad on the brink of a mercy-rule defeat.

In the top of the sixth, Storako’s evening in the circle ended as she was replaced by Widra. Storako allowed just four baserunners and no runs in her five innings — a stark contrast from her regular season outing against the Terps.

Widra retired all six batters she faced, clinching the victory for Michigan — ending Maryland’s run in the Big Ten Tournament.