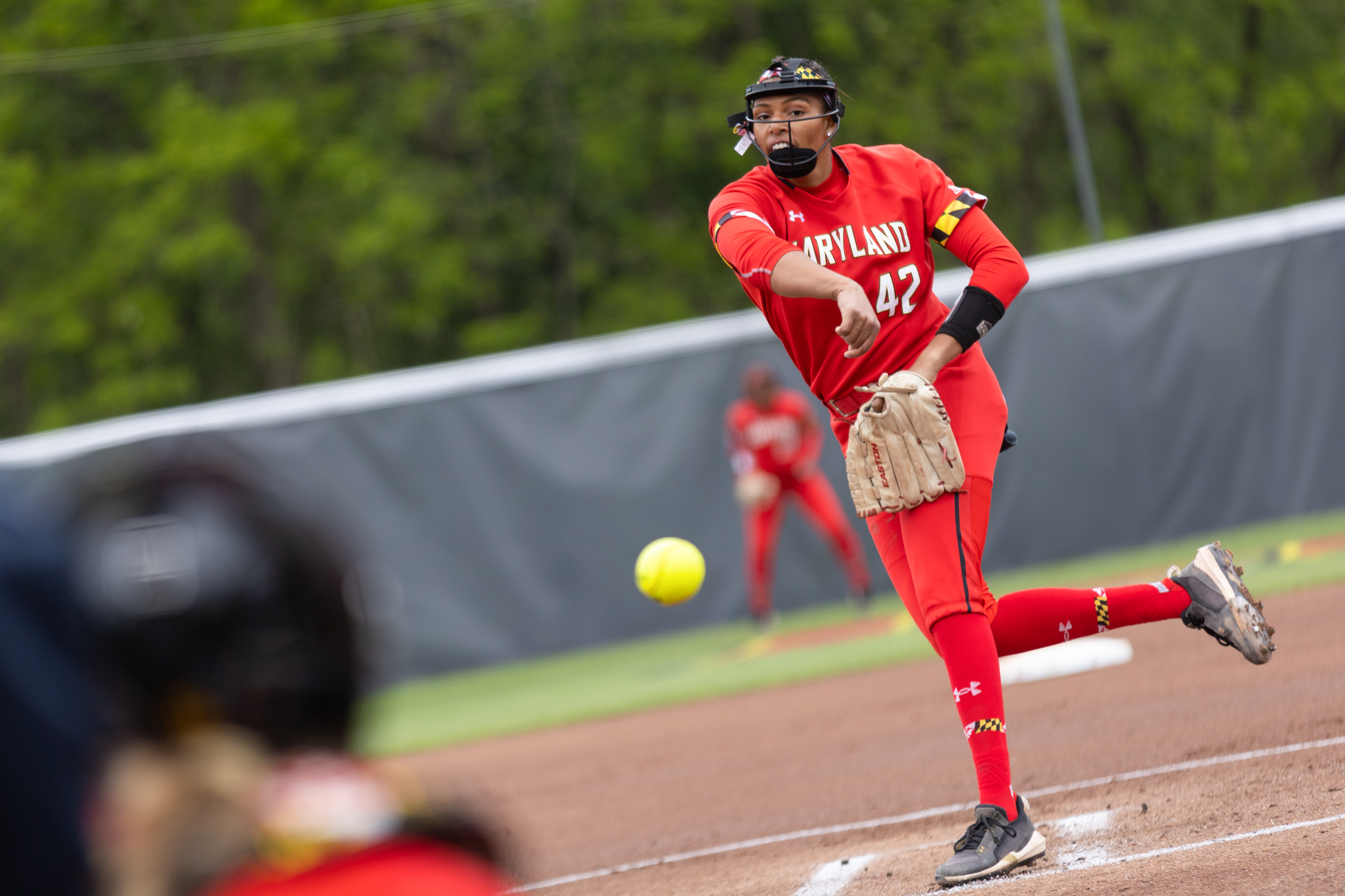 Kiley Goff took off for second base as Megan Mikami showed bunt the whole way. But as the pitch approached Michigan State catcher Kendall Kates’ glove, Mikami pulled back, and Kates quickly threw the ball to second.

Goff slowed down, stalling as the throw had her beat three-fourths of the way toward second. As she was doing so, Michaela Jones snuck her way to home plate, scoring the Terps’ second run of the day.

It was a play that Maryland coach Mark Montgomery has the team practice often. By Mikami showing bunt, the third baseman is drawn off the bag to field, allowing Jones to get a bigger jump.

And on a night where the Terps’ runs were heavily manufactured, the classic play with runners on the corners epitomized their success.

That run was one of seven for Maryland softball as the Terps capitalized off of their speedy small-ball approach once again. Spurred by a complete game from pitcher Courtney Wyche, the Terps moved on to the Big Ten tournament quarterfinals with a 7-1 victory over the Michigan State Spartans.

Wyche threw all seven innings, allowing just one run on three hits. It was Wyche’s second complete game against Michigan State, the first coming just a week and a half ago.

But it wasn’t all smooth sailing for the Terps’ ace.

As the game went along, though, Wyche found her groove.

Wyche said there were no major adjustments aside from relaxing and taking more deep breaths — but those little changes led to big results.

“[I had] a lot of jitters going into it, obviously it’s a big stage for me, it’s my first time pitching in the tournament,” Wyche said. “It really just came down to trusting my mechanics, trusting myself and ultimately trusting my defense knowing that they have my back.”

Unlike in her first victory against the Spartans, Wyche didn’t miss a lot of bats, striking out just one Michigan State batter. But that didn’t matter in the end, as Maryland still advanced to play No. 4 seed Michigan in the quarterfinal.

By hitting her spots and putting the right spin on the ball, Wyche drew seven groundouts and four infield put-outs. From the end of the second inning to the beginning of the seventh, Wyche recorded 13 consecutive outs in her winning effort, moving her record to 14-7 with a 1.93 ERA and 1.23 WHIP.

There was no leader of the pack offensively — No hitter recorded more than 1 RBI, and seven different Terps combined for nine base hits and only one extra-base hit in the winning effort.

That extra-base hit came from Jones, which eventually led to her swiping home. The two Maryland hitters with multiple hits were Jaeda McFarland, who went 2-for-3 and Taylor Okada, who went 2-for-4.

Of the seven at-bats that led to runs, only two reached the outfield — coming in the form of a bloop-single and a sac-fly.The Terps scored in each inning after the third, where they stranded the bases loaded without scoring a run. Maryland went 5-for-8 with runners on third base and less than two outs and went 13-of-21 in advancement opportunities on Wednesday.

“Maryland’s never been here. None of these kids have been here before, not one of them… So I think they’re nervous. We’ve talked about not making the moment too big and keeping them relaxed, but you can say those things, that doesn’t mean that they’re gonna do them,” Montgomery said.

The talks may not have settled the nerves, but the first few innings did. As a result, Maryland will battle No. 4 seed Michigan at 7 p.m. Thursday in the conference quarterfinal.

The game is far from the biggest that Michigan’s played in over the last few years, but the Terps enter with a chip on their shoulder as the new kids on the block.

“It’s Michigan. They are the gold standard in this conference, and until they’re knocked off their horse, they expect to win everything they play,” Montgomery said. “For us to be in a meaningful game, this late in May, is big for this program — eventually, we’ll be playing in June, but right now we have to keep working to stay as long as we can.”