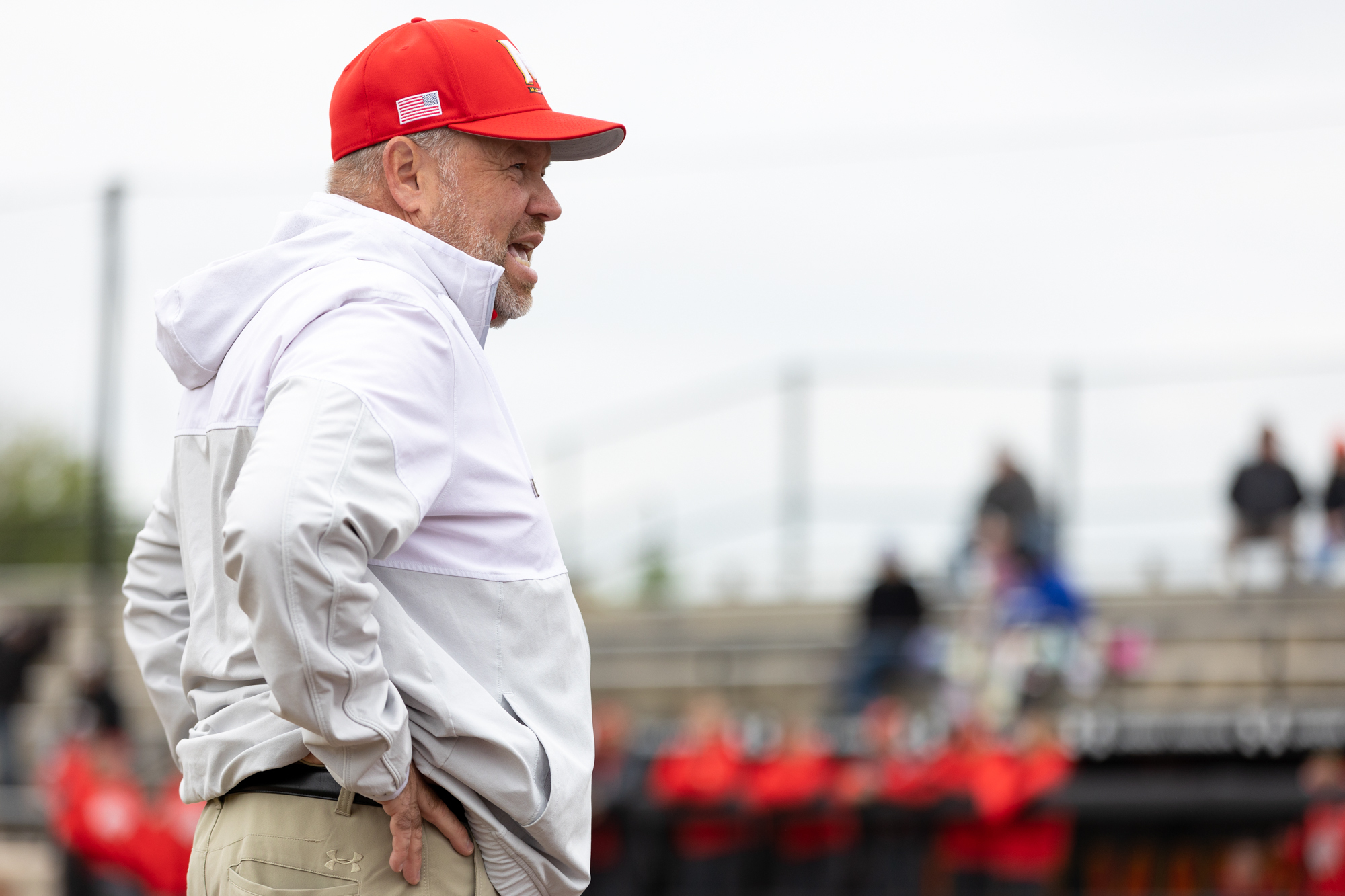 Coach Mark Montgomery puts his hands on his hips during Maryland softball's doubleheader loss to Ohio State on Sunday, May 8 (Cam Andrews/The Diamondback)

It had been a while since a pitcher had Maryland softball’s number like Lexie Handley did Sunday.

When Jaeda McFarland, one of the Terps’ leading hitters, struck out swinging to Handley after a hard-fought seven-pitch at-bat to end the third inning in the first of two games, it was the seventh time a Terp had gone down on strikes in the first nine outs.

Winners of 16 of its last 20 games and looking to enter the postseason as one of the Big Ten’s hottest offensive teams, Maryland posted one of its worst offensive showings of the season in a 6-0 loss. The Terps followed that up with an equally-poor offensive output through six innings, ultimately falling 8-5 despite a four-run bottom of the seventh to take the doubleheader sweep defeat.

After an hour-long delay of the doubleheader’s opening game, Ohio State came out of the pause attacking and getting to Trinity Schlotterbeck early. Two singles followed by a double in the first inning scored two and gave the Buckeyes a quick advantage.

On the other end, Handley diced up the Terps’ offense. Megan Mikami’s leadoff single in the first inning was all Maryland could muster for the next three-plus innings.

Through five frames, Maryland hitters struck out 11 times, including seven over the first nine outs against Handley’s mix of pitches. In the first inning, two punchouts put a base hit to waste. Both the second and third innings ended after a leadoff groundout followed by two swinging strikeouts.

“They have some great pitchers,” Mikami said. “They were moving the ball and they were hitting their spots and hitting locations that we weren’t jumping on super quick.”

The Buckeyes’ lead grew to three runs in the third inning courtesy of another run-scoring double. Schlotterbeck allowed hard contact, struggling to get swings and misses. After a short second inning, it looked like she’d settled down before allowing the third inning score.

In the fifth, Ohio State added one more. In the seventh, two more Buckeyes crossed the plate — first on a solo home run to begin the final inning and the other scoring after a fielding error.

“There’s three elements to the game,” coach Mark Montgomery said. “You can overcome one of them. You can’t overcome two… We made errors at the same innings that they were getting hits.

Handley was unsolvable. The Terps finished with only four hits — none for extra bases — to Ohio State’s 11. Montgomery’s squad struck out 13 times and was shut out for the first time in nearly two months.

Maryland’s ace Courtney Wyche sat in the dugout for the first game. If Schlotterbeck was slow to work through the Ohio State lineup in the first leg of the doubleheader, Wyche was the opposite in the second.

Wyche kept Ohio State hitless through two and two-thirds innings. She needed only five pitches to retire the side in order in the first frame, then eight pitches to get through the second. Even after allowing a hit in the third, she sat at just 21 pitches through the opening three innings.

After nine scoreless innings between the two games, Maryland’s offense briefly found its groove in the bottom of the third. A Schlotterbeck walk, Mikami single and Taylor Ligouri groundout produced its first run of the afternoon and gave the Terps a one-run lead.

But just as Maryland seemed to escape its offensive woes, Wyche’s dominance waned as Ohio State’s bats woke up in the fourth. Three singles sandwiched by a hit by pitch led to the Buckeyes’ first run of the second game.

Then after a botched would-be inning-ending double play, they scored another. A Michaela Jones error allowed the third run of the inning to cross the plate, and suddenly Maryland’s 1-0 lead was a 3-1 deficit.

When Wyche blew up in the seventh, allowing five runs to give Ohio State an 8-1 lead entering the final frame, it proved to be the difference. Maryland’s offense came to life in its final chance, scoring four in the bottom of the seventh. But after Wyche’s collapse, it didn’t matter.

“It’s not a great feeling, but it’s also great to know that we were fighting,” Mikami said. “I know we have fight and I know we have grit.”

With an offense gone mostly dormant and starting pitching that never had a chance with the minimal run support it received, the Terps dropped both ends of Sunday’s doubleheader to close out their regular season.

“We’ll regroup,” Montgomery said. “It’s still the best year that Maryland’s ever had since joining the Big Ten. The fight’s not over.”