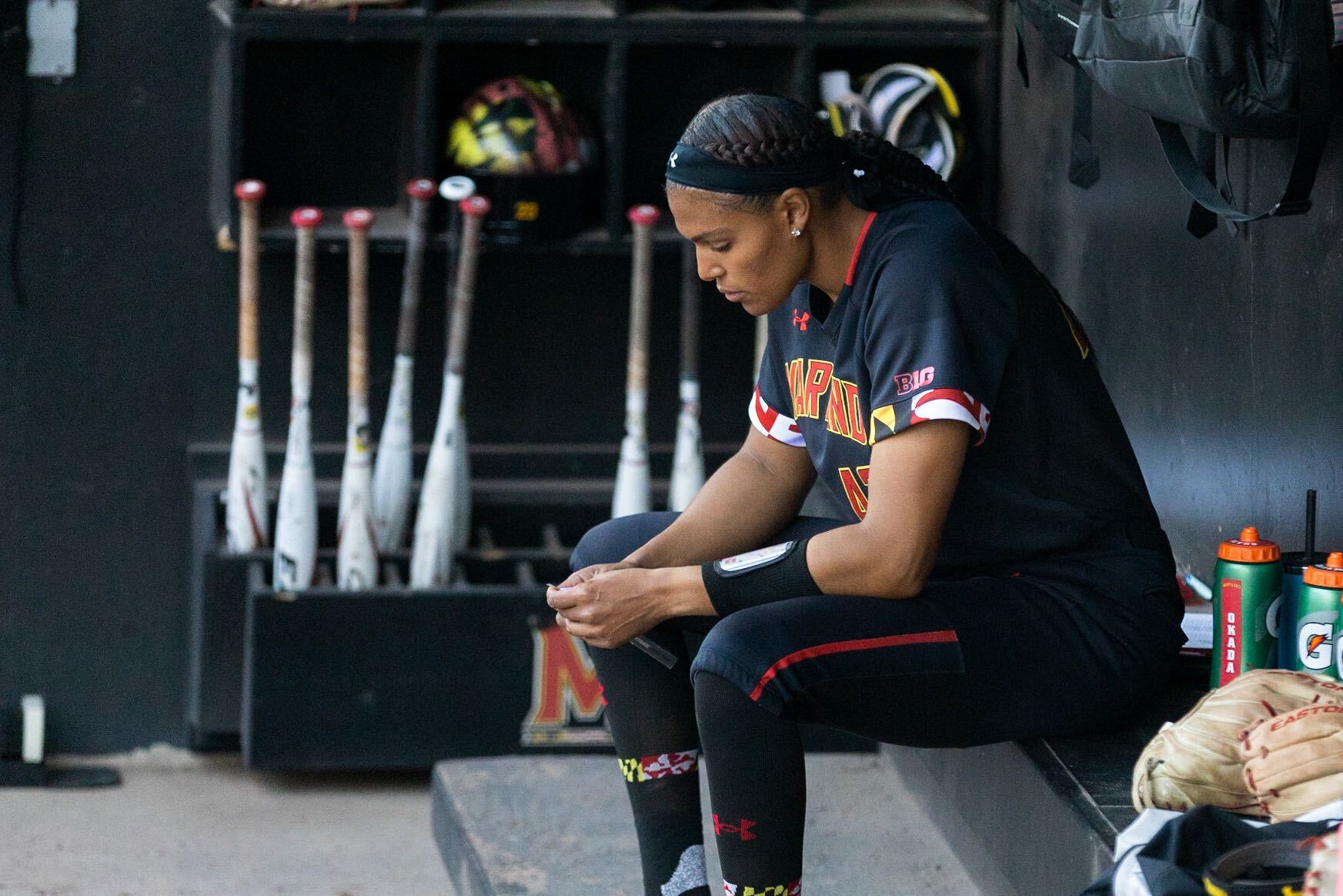 Courtney Wyche sits on the bench during Maryland’s 5-3 loss to Michigan on April 15, 2022. (Riley Sims/The Diamondback)

After throwing a one-hitter in the second game of Maryland’s weekend slate against Michigan State, Courtney Wyche took the circle in the series finale.

She faced just two batters over the minimum in Saturday’s contest, allowing only two baserunners and striking out 10.

In the rare instances the Spartans’ offense made contact against Wyche, it was weak — providing easy outs for the Terps’ defense.

That changed in the series finale, as the Spartans’ batters made things more difficult for Wyche and the Terps.

Overall, Wyche’s line depicts a good outing — five innings, three strikeouts and just two runs allowed. However, the difficult at-bats from Michigan State’s offense made the pitcher battle harder than she did in her previous start, shortening her outing.

“I think their confidence was a little higher against her to swing better because they had seen her enough,” coach Mark Montgomery said.

The Spartans matched their hit total from Saturday in the first inning with a Courtney Callahan one-out single. That set up Wyche to work with runners on base from the opening stage of Sunday’s match.

While she got through the first inning unscathed, the frame was an indicator of troubles to come. Caitie Ladd swung at the first pitch of the second inning and sent it right back up the middle for a single.

She advanced to second base on a groundout and later stole third, putting Wyche in a position she hadn’t been before in the series — pitching with one out and a runner just 60 feet away from home.

Ladd scored on a sac-fly — and the damage could’ve been worse had it not been for a diving grab by Merissa Borkowski in right.

Through two innings, Wyche allowed more hits and runs than she did throughout Saturday’s masterful start.

“There were quite a few [of the hits] that were seeing-eye ground balls,” Montgomery said. “There was one in the three-four hole, two in the five-six hole, one that was up the middle, and any of those balls hit just a couple feet to the left or the right, they end up being routine outs.”

After getting out of a jam in the third inning, Wyche couldn’t do the same in the fourth. Two singles, a groundout and a stolen base put runners on second and third for Kendall Kates with just one out.

On a 1-2 pitch, Kates swung halfway on a ball out of the zone. A check with the umpires ruled she didn’t go, setting up a 2-2 count. On the very next pitch, the Spartan catcher hit one the opposite way in the air to Borkowski in right for a sac-fly that gave Michigan State the deciding run.

Wyche was mere inches away from ending Kates’ at-bat but instead, the Maryland pitcher gave up the lead.

Two Spartans reached base in the fifth, but none came across to score.

With a runner on third and one out in the frame, Wyche battled through a tedious at-bat with Jessica Mabrey. After going behind in the count 1-2, Mabrey took a ball before fouling off four straight pitches to keep herself alive at the plate.

The next batter worked a seven-pitch walk. In just two at-bats, Wyche’s pitch count increased by 17. Despite retiring the next Spartan and not allowing a run in the fifth inning, Wyche dealt with drawn-out at-bats — diminishing her energy for the remainder of the game.

A leadoff single in the sixth prompted the end of Wyche’s day — her shortest outing since April 9 and two full innings shorter than her outing on Saturday.

Despite that shortened outing, Wyche faced just one less batter in the series finale than in game two.

“[Wyche] was a little more tired [in game three], she probably lost a couple miles per hour,” Montgomery said. “But at the end of the day, I thought she pitched … well enough for us to win.”