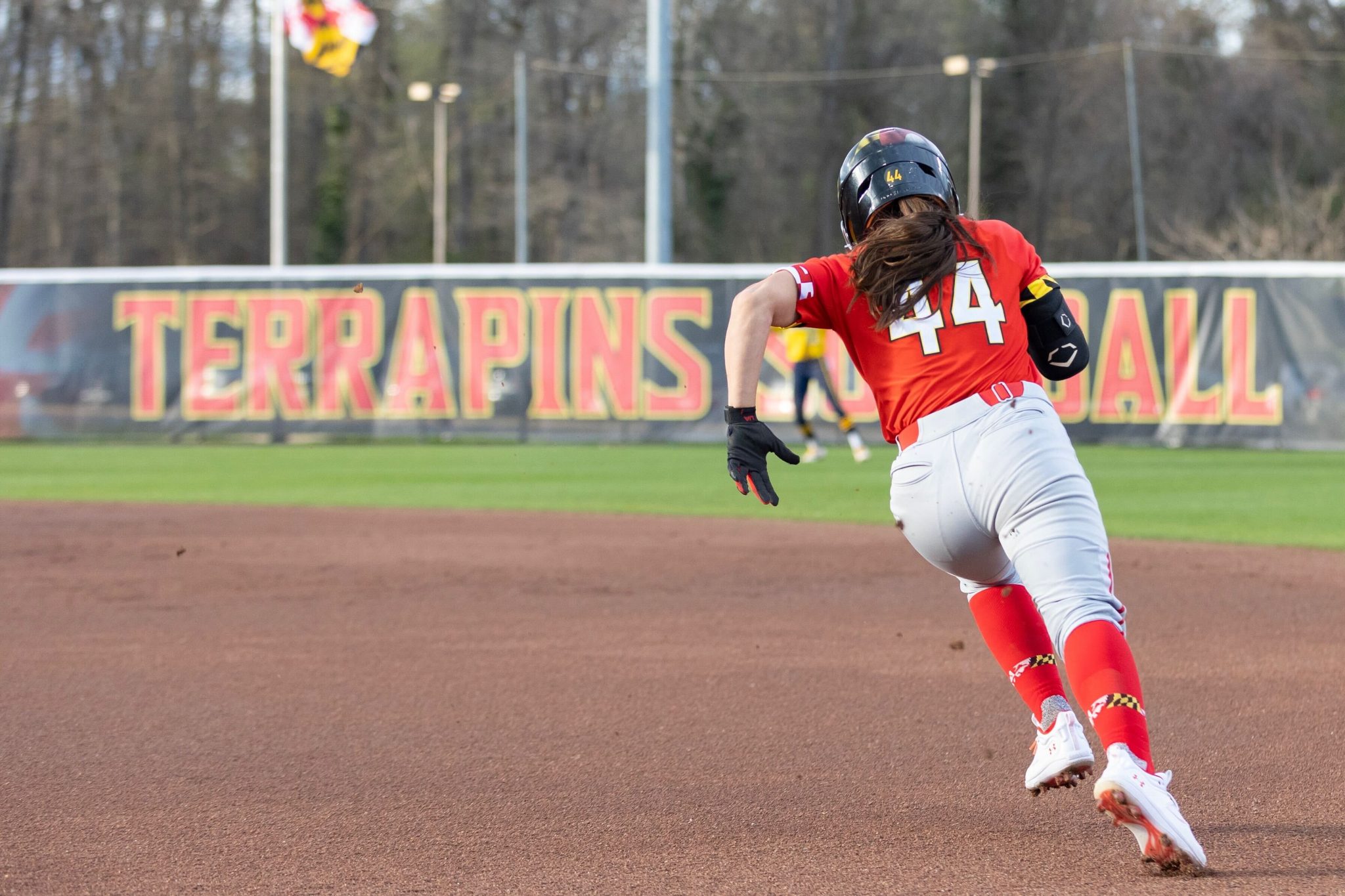 With her team trailing Michigan State in the top of the third inning, Megan Mikami took the plate for Maryland softball.

Ashley Miller rocketed one pitch to Mikami and she drilled the ball to Spartan centerfielder Jessica Mabrey.

Mabrey dove to snag Mikami’s hit, but the ball slipped just under her glove. Then, Mikami did what she does best.

Mikami — who leads the Big Ten in steals — sped around the bases. Mabrey and left fielder Courtney Callahan were still fielding the ball as Mikami rounded third base with coach Mark Montgomery frantically waving her home.

Mikami slid headfirst into the plate with time to spare.

Despite Mikami’s baserunning, the Terps couldn’t get ahead of the Spartans. The Michigan State bats came alive as it faced Courtney Wyche for the second day in a row. The Spartans snuck by Maryland, 2-1, and prevented the Terps from securing the sweep.

After Mikami grounded out to open the match, Jaeda McFarland singled through the gap to land a baserunner for Maryland. She wasn’t there for long, though.

Mackense Greico smacked a single toward the right gap, but the ball hit McFarland — automatically ruling her out. Trinity Schlotterbeck followed with a ground out to Ashley Miller in the circle and Michigan State recorded three outs in a rare fashion.

Wyche returned to the circle for the second time in the series. After seeing a lot of Wyche in her one-hit performance on Saturday, the Spartans were ready to swing.

Callahan and Caitie Ladd singled in the bottom of the first and second frames, respectively, to double the number of hits their squad had the day prior.

Ladd’s hit got the Terps into some trouble. The next batter, Kendall Kates drilled the ball toward Michaela Jones at third base, but Jones misplayed the grounder. She fired the ball to Greico at first to get the out on Kates, but Ladd advanced to second on what could have been a double play.

Kiley Goff attempted to catch Ladd stealing third, but she chucked the ball over the head of Taylor Okada. Ladd reached third unscathed and represented the first run of the game — just 60 feet away.

Zaquai Dumas got her home. She popped up to right field that forced Merissa Borkowski to make a diving catch. Ladd took off from third and Borkowski’s throw didn’t make it to the plate in time, giving Michigan State a one-run lead in the second inning.

The Spartans’ lead was brief. Mikami’s speed tied the game on a misplay by Callahan as she touched all four bases with what could have been a single.

Greico followed Mikami’s inside-the-park homer with a deep double to right field, but she couldn’t score as Trinity Schlotterbeck struck out to end the third inning for Maryland.

After recording a scoreless third frame for Michigan State, Wyche found herself in a fourth-inning jam.

Kates flied out to right field and Snyder scored to reclaim the Spartans’ lead.

The Terps couldn’t respond in the fifth inning — they went three up, three down on ground outs.

And yet again, Michigan State worked Maryland into trouble.

Borkowski attempted another diving play on a popup in right field, but was unsuccessful this time. The ball bounced off her glove and rolled out of her reach as the batter, Mackenzie Meech earned a stand-up double.

Marissa Trivelpiece pinch-ran for Meech and advanced to third on a ground out. Mabrey popped up to Ruby Butler at shortstop and Callahan walked, but a runner still stood in scoring position.

Wincher grounded out to second to get the Terps out of another tough spot.

After another quick set of at-bats for Maryland, Alexis Barroso cracked a first-pitch, no-out single off Wyche and Montgomery pulled her in favor of Schlotterbeck.

Miller made quick work of the Terps in her final three innings. She pitched a complete game and helped her squad avoid a sweep.