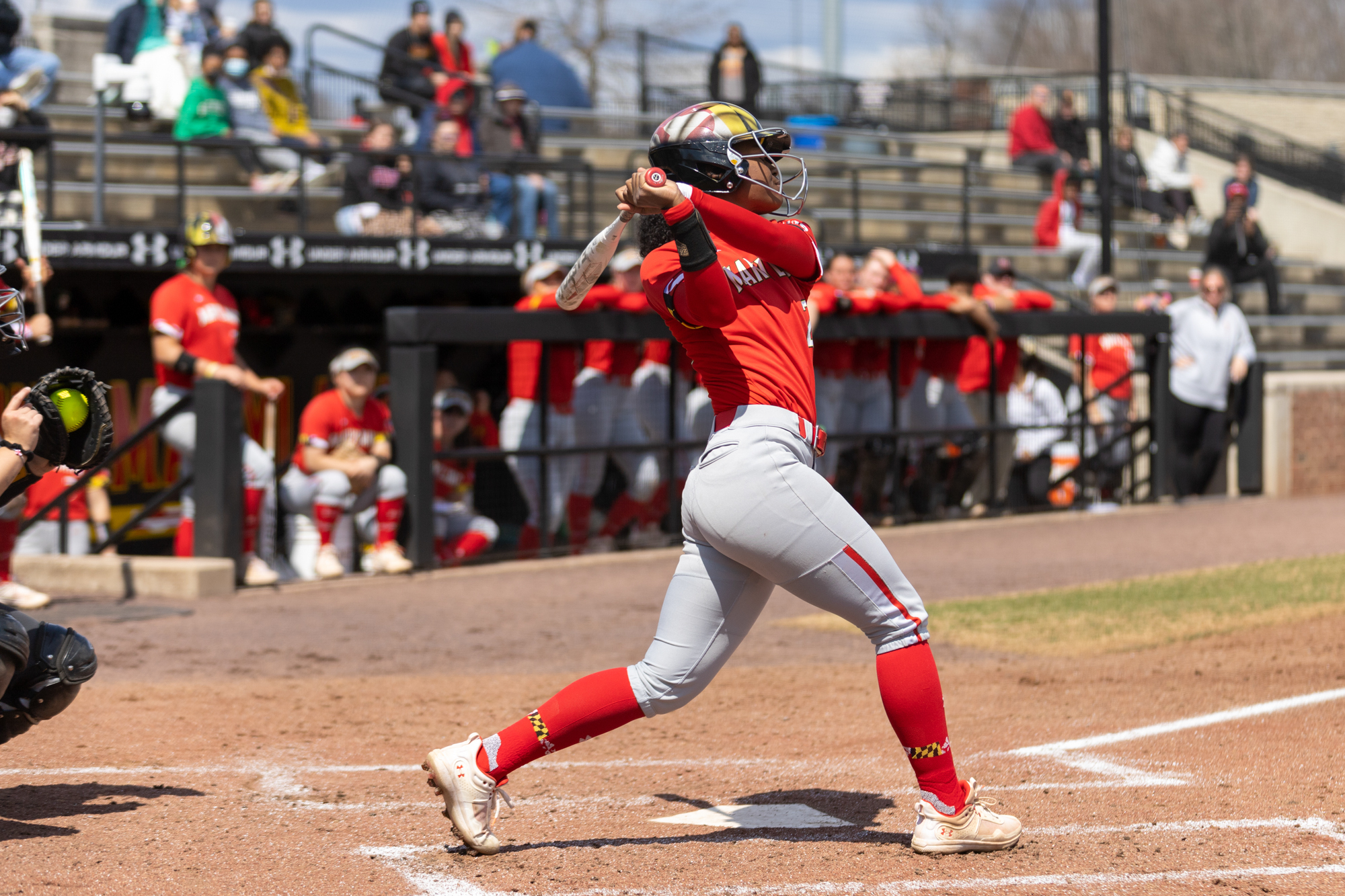 The first two innings of Saturday’s contest went without a hitch for Minnesota. Freshman pitcher Emily Leavitt continued where she left off from Friday, firing two scoreless innings for the Gophers while allowing just one hit in the frames.

But Maryland softball’s bats got the scoring started in the top of the third.

Six straight base runners — four singles, a walk, and a hit by pitch — resulted in four Terps crossing the plate in the frame, putting Maryland ahead 4-0.

Minnesota scored a run in the fourth but never got closer to within three, as Maryland cruised the rest of the game to a 6-1 victory, tying the series at one game apiece.

“They bounced back nicely. They didn’t let [Friday’s loss] define us, and they came out Saturday with a very strong performance,” said coach Mark Montgomery.

After pitching all five innings in Minnesota’s series opening victory Friday, Emily Leavitt got the starting nod for the Gophers in game two as well. Maryland started Courtney Wyche, the only Terp pitcher that didn’t appear in Friday’s mercy-rule defeat.

Leavitt cruised through the first two innings, allowing just one baserunner on 32 pitches.

Like Leavitt, Wyche started her afternoon with two scoreless innings — though not as comfortably. Wyche allowed two base runners in each of the first two innings, but managed to get out of both jams unscathed.

The Terps got to Leavitt in the top of the third inning.

Kiley Goff led off with a five pitch walk, and Merissa Borkowski singled to short on the very next pitch. That brought up Megan Mikami, who lined a single into left. Mikami’s shot got past Ellee Jensen in left, allowing both Goff and Borkowski to score.

Jaeda McFarland followed with a base hit into left center, scoring Mikami easily from third. Later in the frame, Haley Ellefson brought home the Terps’ fourth run of the inning on a single up the middle to score McFarland.

Wyche fired her quickest frame in the bottom half of the inning, retiring Minnesota in order to end the third inning with Maryland ahead, 4-0.

“I believe that softball is all about momentum, so we came out and took the lead,” Goff said. “Getting that lead was reassuring to be like ‘guys we got this,’ so as we took that momentum and the lead we kept applying pressure.”

Nani Valencia replaced Leavitt in the circle in the fourth, the first time in the series Maryland’s bats faced off against a different arm.

Minnesota joined Maryland on the scoreboard in the fourth.

With Mackenzie Denson on third and no outs in the inning, Makenna Dowell hit a 2-0 pitch into left field. Mikami made the catch but Denson scored without a throw, trimming the Golden Gophers’ deficit down to three, 4-1.

Autumn Pease relieved Valencia in the fifth for Minnesota. Valencia fired a scoreless inning on just nine pitches in her lone inning of work.

Maryland scored off Pease just five batters into her outing.

After two singles and two outs in the frame, Taylor Okada stepped up at the dish. Okada grounded a ball past the diving glove of Sydney Strelow at second, scoring Mikami and Mackense Greico. Okada’s two-run single extended Maryland’s lead to five, 6-1.

Wyche retired the Golden Gophers in order in each of the final two innings, securing the bounce-back win for the Terps.