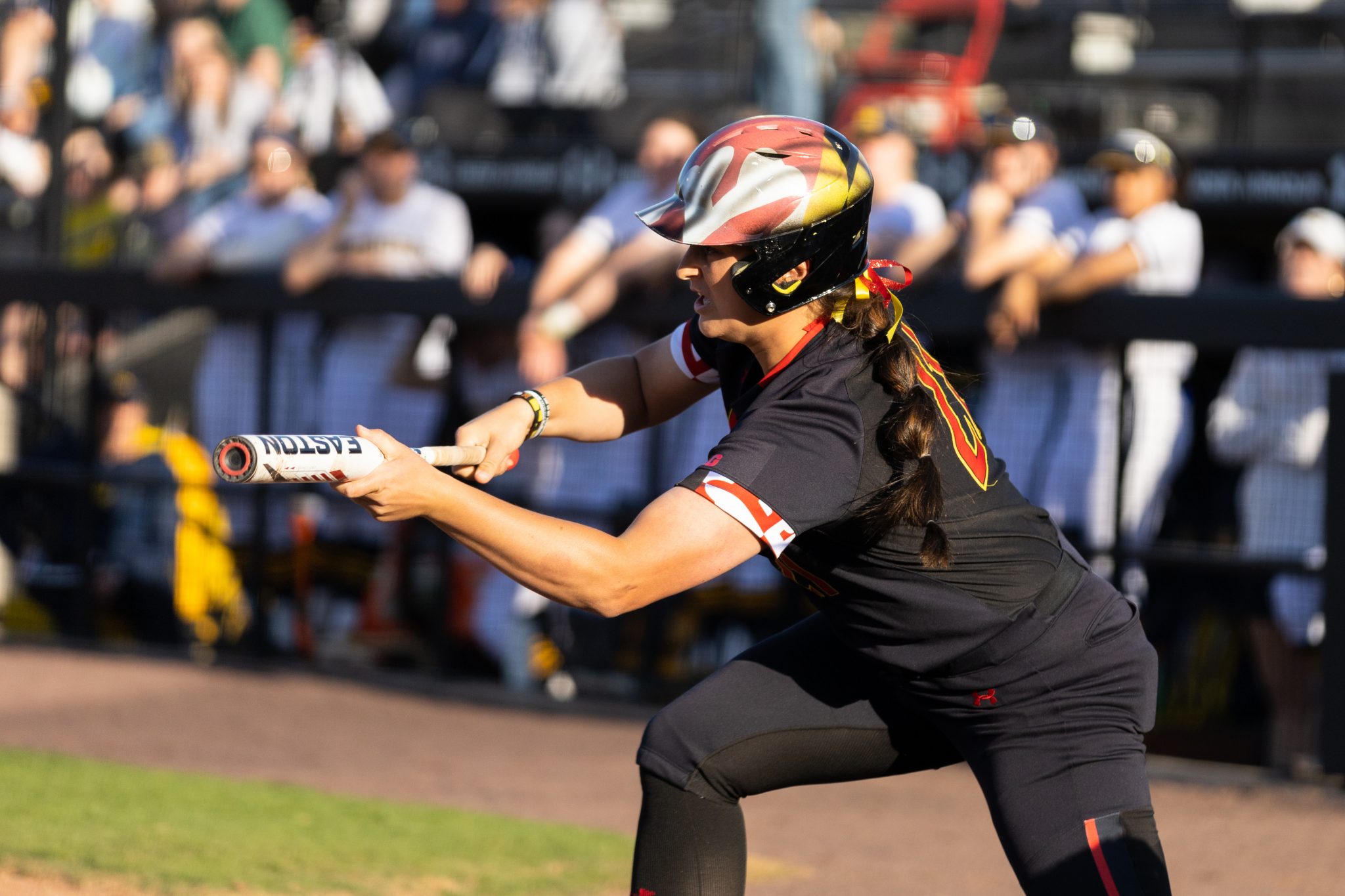 Following Maryland softball’s first series loss in conference play to Michigan, a doubleheader against a struggling Rutgers squad was just what the Terps needed.

Coach Mark Montgomery’s squad vanquished the Scarlet Knights in both legs of its doubleheader Tuesday, moving to 10-4 in conference play.

In the first Big Ten battle, Maryland’s offense flourished with 11 hits. Despite a similarly strong offensive showing from the Scarlet Knights, the Terps were able to capitalize more effectively on their opportunities in a 10-7 victory.

And while Montgomery’s squad still put up nine hits and six runs in the subsequent game, Maryland showed its ability to control a game defensively in its 6-1 win to clinch the conference sweep.

At the start of the first game, both sides were held scoreless after two innings. Gabrielle Callaway put an end to the drought when she launched a solo shot past center field — her tenth home run of the season — to give Rutgers the early edge.

When the Terps got the chance to return the favor, they took the lead and never looked back.

It started with a Kiley Goff walk. She then proceeded to steal second base, before Megan Mikami grounded a ball to the pitcher but beat the throw to first base.

Mikami stole second base and caused an errant throw on the next play. This allowed for Goff to score to tie the game.

Montgomery’s squad continued to score in a variety of ways: a fielder’s choice, an RBI single and a Haley Ellefson home run which nearly cleared the netting.

The Terps scored seven runs in the third inning altogether, giving them a commanding six-run lead.

In the fifth frame, Rutgers chipped into its deficit as Maryland struggled defensively. The Scarlet Knights scored four runs in the inning,  three of which were unearned.

It didn’t take long for the lead to grow back thanks to a Maryland outburst in the sixth. The Terps regained control with a 10-5 advantage.

With the game down to the last three outs, the Scarlet Knights stayed resilient. A double from Rutgers center fielder Taylor Fawcett brought two runs in, bringing the score back to within three with two runners on base and only one out.

The Scarlet Knights had the tools to tie the game, but couldn’t capitalize. The next two batters grounded out, stamping Maryland’s ninth conference win.

Despite the win, Montgomery was disappointed in the team’s performance in the first game.

Coach Montgomery, however, was much more impressed with how the team played in the second game.

When Wyche stepped on the mound to start the second game, it didn’t take long before she allowed a single off the second batter.

She wouldn’t allow another hit for the rest of the game.

Wyche commanded the mound in the second battle, finishing with nine strikeouts while only allowing one hit and a .042 batting average.

“Her performance was dynamite. I mean, just dynamite,” Montgomery said. “She’s throwing 70+ miles per hour, followed by just a wicked nasty changeup. It’s just hard to hit her. We couldn’t be more proud of her performance and what she’s done.”

Following a scoreless first inning of the second game, Maryland got on the board first when Mikami was walked with the bases loaded.

The Terps scored another run in the fourth when Ruby Butler cranked a shot to deep centerfield, sending in another run.

The next inning, Taylor Okada hit an RBI double to push the lead to three. She would then advance to third and soon complete the trip back home after an attempted steal from Michaela Jones led to a faulty throw.

A pair of walks and a wild pitch allowed for a Rutgers runner to score, but Maryland answered with two runs of its own.

Rutgers had one more opportunity to score in the seventh inning, but couldn’t get on base. The last batter swung and missed, concluding the doubleheader with a Maryland sweep.

“We bounced back in the second game,” Montgomery said. “I thought we got a great performance out of [Wyche].”