Unity for the Outcasts premiere their first EP at The Pocket 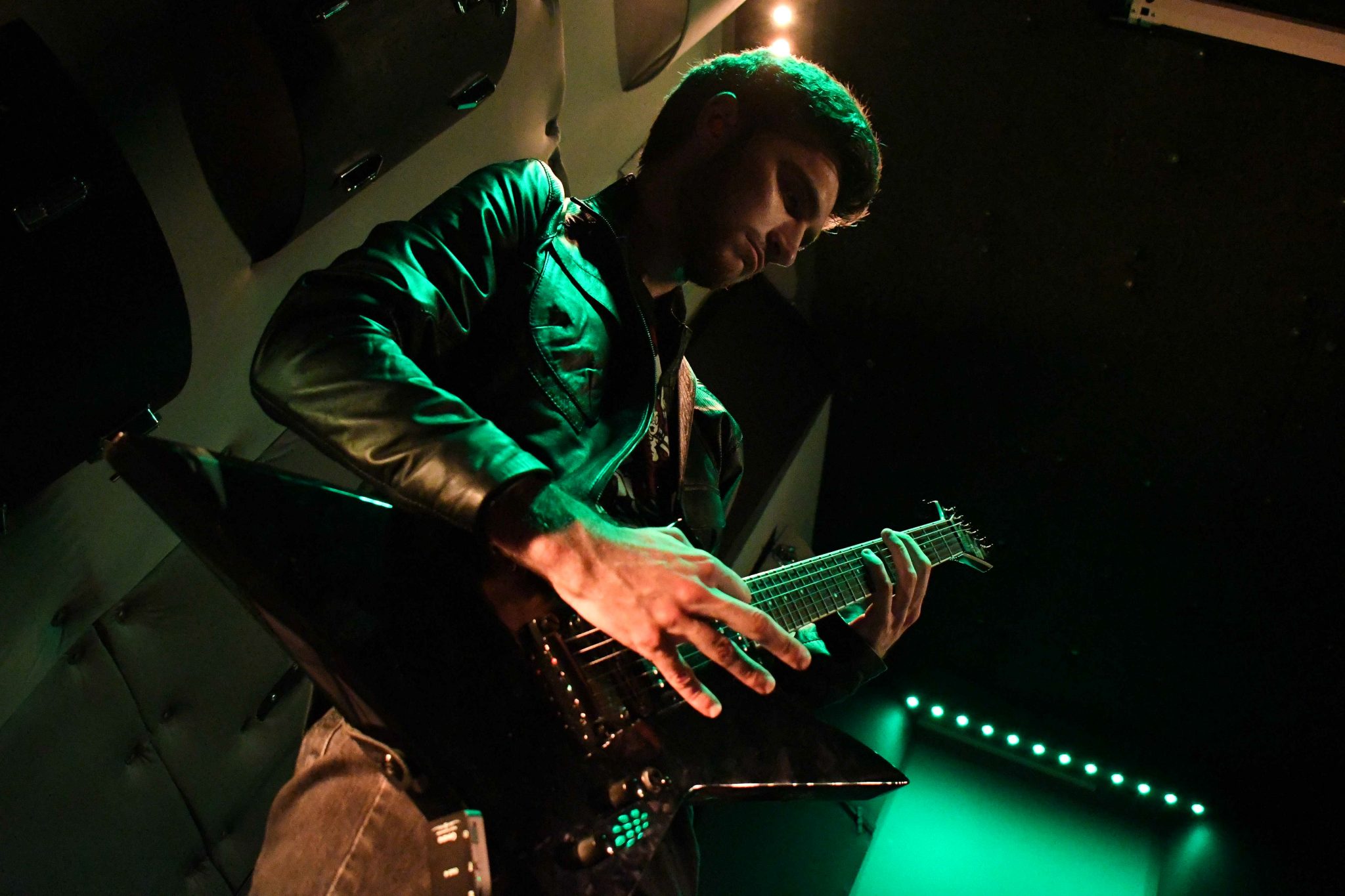 Rhythm guitarist Armon Sari performs with Unity for the Outcasts at The Pocket in Washington, D.C., on April 8, 2022. (Dorvall Bedford/For The Diamondback)

Rohit Nutalapati sat on a stool next to the stage in The Pocket as the light shining on his band made him a silhouette. With a medical sling carrying his left arm, all he had for this performance was his microphone, which he used to talk to the audience. He told them that the band was going to perform their newly released EP, The Land of Make Believe.

“We’re gonna take you through that journey with us tonight,” he said to everyone. “Our first song is about sticking through the struggle, staying who you are, being hopeful in the world.”

Then, the band began to sing “Tell the World,” the first song they had ever released.

Unity for the Outcasts, a local band consisting entirely of current and former University of Maryland students, performed at The Pocket on Friday in Washington, D.C. It was a concert that marked a new beginning with the release of the band’s first EP that happened the same day. Yet, it was also an ending for senior computer science major Nutalapati, whose performance that night was the last one he did before parting ways with the band he helped create.

The journey of Unity for the Outcasts has been one of adversity and compromise. Nutalapati and junior computer science major Samrat Somanna started Unity for the Outcasts back in the fall of 2019 after meeting each other in a group chat on Instagram. They initially auditioned for Terrapin Record Label in the spring of 2020 without success and were forced to stay at home when the pandemic began.

[Luna Luna, Dent May and Pearl & the Oysters fill DC9 with dreamlike charm]

But the pandemic didn’t stop them. They released “Tell the World” in July of that year as a way to tell the world that the band was coming, according to Somanna. Exchanging ideas through WhatsApp and voice memos, Nutalapati essentially made the entire song in his bedroom. And he did this while still in the process of learning how to play the electric guitar.

Unity for the Outcasts also found a way to perform for an audience despite the pandemic when they decided to do a livestream over Instagram using a combination of Discord, Zoom and Open Broadcaster Software to make it all work.

The band’s persistence paid off when they eventually became part of Terrapin Record Label and performed in person for the first time at NextNOW Fest on Sept. 17 of last year. According to Nutalapati, they rehearsed for a month for their Instagram livestream. For NextNOW, they only practiced once.

“We sounded better at NextNOW than we did in the livestream,” said bassist Siddharth Gupta, who is currently taking a leave of absence from the university.

Once Unity for the Outcasts joined the live music scene, they began to perform frequently around the area. In an interview with the Diamondback in 2020, Nutalapati said he wanted to play at Baltimore Soundstage because that’s where he saw one of his favorite bands, Set It Off, perform. The band got their opportunity to perform there on March 27 of this year.

Other places the band has performed at include The Hall CP, The State Theater of Havre de Grace and the Baltimore Room in Stamp Student Union. Their EP release show on Friday wasn’t even their first time at The Pocket.

Gupta described a moment when he sang something while performing at Baltimore Soundstage and the audience repeated it back to him. He said it was a crazy experience.

“That was just crazy, seeing how much support we had measured in decibels,” Gupta said. “The magic, a lot of it, comes from the feedback, like hearing the crowd cheer [and] seeing the mosh pits going down underneath you.”

Not only did the band keep themselves busy with performances, but they also worked on making what they planned to be their first album. Having started the groundwork for it as far back as 2020 before the pandemic, Nutalapati and his band wanted to make a series of songs that were in line with the name of the band, tackling the struggles of life and the expectations people carry.

“This EP speaks to that as being a reminder that there’s so much more to life than just going through the downs,” Nutalapati said. “No one — not our listeners, not our friends, none of us — is ever really alone.”

Originally meant to be an album of seven songs, the project ended up becoming an EP of just five. The change of plans happened due to a malware attack, according to Nutalapati, that caused the band to lose some of their data. When they went to their backups to see what songs they could recover, only the five current songs remained. Nutalapati said the original album was meant to have a narrative element and that the narrative is still there in some capacity in the EP.

Two of the five songs in the EP are remasters of singles already released by the band. Nutalapati described the changes between the old versions of the songs and the new ones in just five words: “You can hear the guitars.”

According to Nutalapati, he had only focused on the drums and vocals when he previously produced the songs, and now, there is a better balance of that with the other instruments.

Nutalapati also said the genre of the band is becoming harder to label with every new release. In 2020, the band’s genre was described as alt rock and pop punk. More recently, he said it was a mix of pop rock, pop punk and metal.

“Emo to screamo and everything in between,” Gupta added.

Overall, the new EP seems like it was a passion project for the band, Nutalapati especially — Gupta attributed most of the work to Nutalapati.

“The Land of Make Believe EP is his brain child,” he said. “This is all coming from him.”

But The Land of Make Believe is also Nutalapati’s last contribution to Unity for the Outcasts before he leaves the group. He’s already prepared the band for his departure by having junior government and politics major Armon Sari join as his replacement.

However, Nutalapati is leaving the band earlier than expected because he also injured his shoulder, which is preventing him from playing the electric guitar. He said he doesn’t feel very comfortable being just a singer.

“I just don’t feel like I will be adding a whole lot to the live sound by sticking around except for this one show,” Nutalapati said.

He described the concert at The Pocket as his last hurrah before passing the torch to the rest of the band.

At The Pocket, Gupta said he wanted to honor Nutalapati during their last show together.

“It’s gonna be a Viking funeral,” he said. “We are going to send him off with the most epic show we can muster.”

And the concert was definitely lively. The band itself interacted with the crowd. Gupta came off stage for one song as he played his bass guitar next to the audience.

There were also moments of comedy throughout the concert. At one point, there was an issue with a microphone, and Claire Mical, an alum and vocalist, turned to Somanna, telling the audience that he had a funny joke to tell them.

The show ended on a serious note with a speech from Somanna. He described how he was going to miss Nutalapati since he was Somanna’s first friend at the university.

“He’s one of the most genuine people I know,” Somanna said. “If there’s one thing that gets me through life, it’s my friends, and [Nutalapati] is an example of that.”

Alex Folmer, a guitarist and singer from the band Heartbent, was wearing a Unity for the Outcasts T-shirt. He said he loved the band’s performance.

“It was sad seeing a member of their band leave, but I’m excited to see where they go [in] the future,” Folmer said.

“[Nutalapati] was the person who invited me to the band — who said I was good enough,” Mical said. “I’m gonna miss him.”

Nutalapati himself said his departure gave him a mixed bag of emotions. He said the concert was the single best show he ever did, and it was unfortunate that he had to go.

He gave one final piece of advice for his band going forward:

“Love yourselves,” he said.