Q&A: UMD band Unity for the Outcasts on manifesting their musical goals 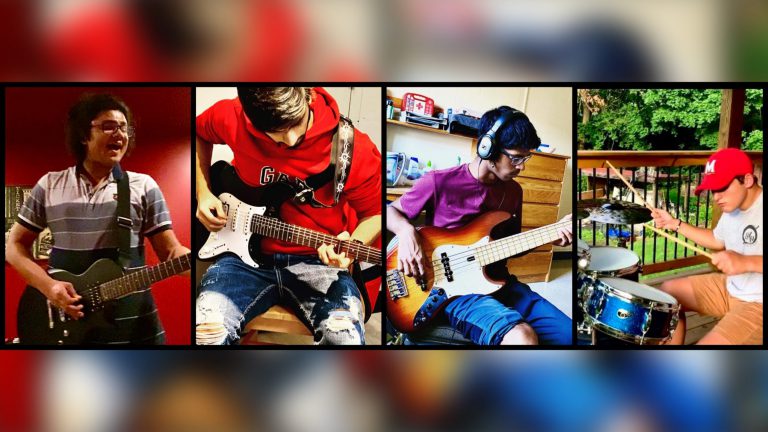 Rohit Nutalapati and Samrat Somanna didn’t think much of a random 2019 Instagram group chat. And they definitely didn’t know that it would be the catalyst for the formation of their “pop punk, alt rock” band Unity for the Outcasts. The founding members, both rising sophomores studying computer science at this university, later recruited Saran Ram, a rising sophomore information science major, and Dillon Kaschenbach, an incoming freshman and physiology and neurobiology major.

Nutalapati is the band’s lead singer and accompanying guitarist; Kaschenbach is on the drums; Somanna and Ram both provide back-up vocals, with Somanna on lead guitar and Ram playing bass. Together, the musical group intertwines classic elements of pop, punk and rock to create music that speaks to a larger message of individuality and acceptance.

I recently spoke with three-fourths of UFTO via Zoom about the recent release of their debut single “Tell the World” and the complex musical plot behind their forthcoming album The Land of Make Believe.

Talk to me about the band’s name, Unity for the Outcasts. What’s the inspiration behind the name, and how did you all come up with it?

Nutalapati: It was a lazy Saturday morning, and Sammi [Samrat] and I had nothing to do. Sammi was just sitting and playing around with the guitar and I was like, ‘Dude, we’re all like cast out.’ And he was like, ‘Dude, we need to unite.’ And that was it! It’s not much more than that. We also just thought that it was a nice message. We all want to be the unity for people who have been cast out by others, for whatever reason.

When did Unity for the Outcasts officially become a band, and when was the band’s debut?

Ram: I guess for me, because I joined in somewhat as a new start, it really hit when we had those 2 a.m. and 3 a.m. sessions, writing the lyrics. And from there, I felt like we’re starting to get somewhere and that started to be the foundation for me.

Nutalapati: I don’t know if we all think that it’s at the exact same time, but for me, there was an audition that we saw on campus by the Terrapin Record Label, who were trying to discover artists … At that time, we had zero practice and we had one almost completely written song. But we said let’s just go and try it. And so we went up and we performed it with our drummer then and the three of us. And I guess in my head, that’s when things got real.

Let’s talk about the band’s new single, “Tell the World.” I recently listened to it, and it’s really catchy and, overall, an incredibly defiant tune. Did you guys channel some personal influences and inner angst when writing the song?

Nutalapati: So the first single … is called “Tell the World,” and it really serves two purposes. One of them, which is the most obvious, is that it’s our introduction to our future listeners. And we want to tell the world that we are on our way to bigger things. Initially, the album was supposed to be a couple of unrelated songs but it grew into this seven-song story that we plotted out lyrically and sonically … where there are two protagonists who set out on a quest to find themselves and they start receiving negativity from the world. A couple of us have felt that in the past so we wanted to reflect that in these characters to the point where they set out to go and find themselves. And I guess it was written before all the recent protests and it also has that sense of frustration that stems from the amount of injustice that’s plaguing the U.S. and also back home in India … So there’s a lot of frustration put into that that comes from there as well.

Somanna: We wrote it with the intention of it being an anthem — something that people sing along in unison. For me personally, I’ve gone through a lot of growth during my middle school and high school years. I used to be very unconfident. I had very low self-esteem and [was] kind of a nerd in school. But I’ve shown growth throughout that. But of course … there’s always going to be people who either want to put you down — implicitly or explicitly. So this song kind of sums up all of those emotions and feelings regarding that.

Are there any venues or specific hotspots on campus where you guys would like to host live shows, performances and gigs?

Somanna: Yes! Outside of campus, the first scene that comes to mind is Baltimore Soundstage, because that’s where us three saw one of our favorite bands, Set It Off, perform. Ever since then, it’s been a high goal of ours to perform at the same stage. Within campus, I think NextNOW Fest would be a pretty cool format as well as the Baltimore Room.

What are some musical goals that you all would like to speak into existence?

Ram: I think we all have slightly different ideals and goals for where we want to take this band. But for me, I [want to] have a community that supports us and are proud that we come from College Park. And also, to spread the messages that we have through the songs and to connect them all through that.

Nutalapati: I would say that in our time in college, I want us to put out two albums, which I think is a good milestone. But aside from that, also reaching people and being part of the community. If what we write ends up cheering up one person, that’s what matters. That’s the root of it all.

Somanna: Getting the blue tick on Instagram! No, but probably a performance-wise goal for this band is to go on tours where we’re traveling across different states in the East Coast. That’s a huge goal for me because that would be so cool to drive around and go roadtripping. And another goal for me is to get to the point where our fanbase is big and strong enough to start selling merchandise. I think that’s a great thing, basically turning your band into a brand. And I guess becoming an item in the local music scene and being a musical act who’s known by many other people. Because at the end of the day, that’s what it’s all about: making an impact on your local music scene.