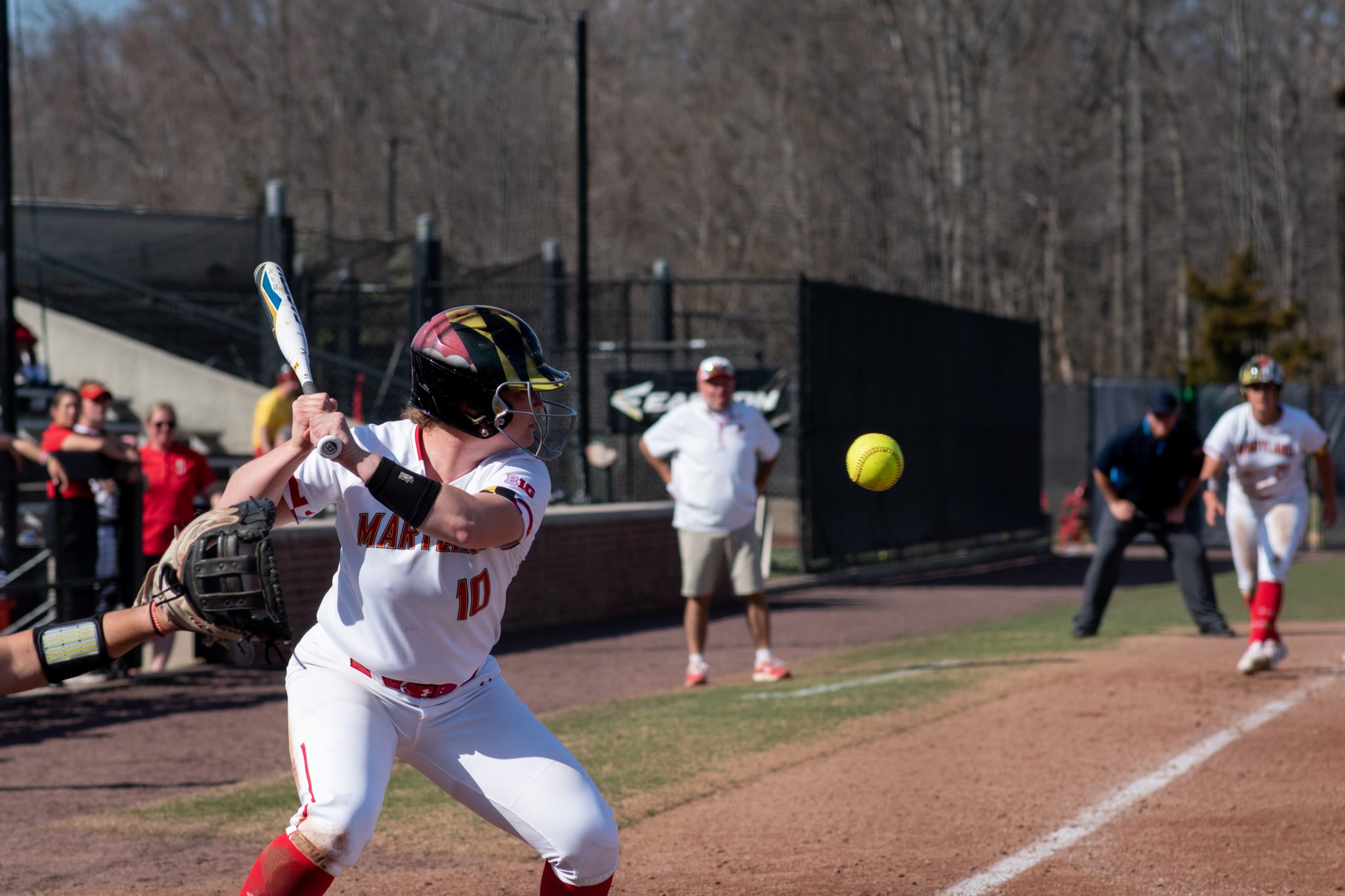 Down 6-0 after three innings, Army looked to join Maryland softball on the scoreboard in the top of the fourth frame.

Madi Gilmore put the Black Knights on the scoreboard with a leadoff home run with no outs in the inning. The next two batters were retired.

Then, the next nine Black Knights all reached base. One walk, two doubles and six singles later, Army led, 8-6.

Army scored seven runs with two outs in the fourth and 13 Black Knights came up to bat in the inning.

The Terps cycled through three pitchers in the inning. After three scoreless frames from Courtney Wyche in the circle, Maryland’s pitching staff imploded.

Maryland split its Saturday doubleheader. The Terps fell to Army, 8-7, before shutting out Binghamton for an 8-0 mercy-rule victory in five innings.

Maryland took an early lead in its first game of the day against Army.

Taylor Okada led off the top of the second inning with a single to center field. She moved to second following a sac-bunt by Michaela Jones.

Ruby Butler followed with a single, moving Okada to third. Butler stole second on the very next pitch to put two runners in scoring position for Katie Dustin.

Dustin knocked a grounder through the right side, easily scoring Okada from third. Butler tried scoring from second but was thrown out from right by Kayla Edwards. The tag was applied at home right before Butler could cross the plate — much to the dismay of coach Mark Montgomery.

The Terps added on to their lead in the third.

With Megan Mikami on third and Merissa Borkowski at second and no outs in the inning, Emily Iannotti threw a wild pitch past Maddie Wilkes behind the dish. Mikami slid in ahead of the throw, which was unable to be corralled by Iannotti. As a result, Borkowski scored.

Mackense Greico followed with a walk and was replaced by Regan Kerr on the bases. Kerr stole second and scored on a single up the middle by Haley Ellefson to give the Terps a 4-0 lead.

A few batters later, Dustin lined a double over third base to score Ellefson and Butler. Maryland’s lead was extended to six.

Army scored its first runs of the game in the top of the fourth. Gilmore led off the inning with a rocket over the wall in left field for a solo home run.

After Wyche retired the next two batters, the Black Knights rallied for seven more runs.

Kyra Pittman replaced Wyche in the circle but didn’t fare any better in the inning.

Pittman gave up five straight singles to score four Black Knights as Army took an 8-6 lead. Pittman was relieved by Trinity Schlotterbeck, who got out of the inning without allowing any more damage.

The Terps got a run back in the bottom half of the inning.

Mikami led off with a double and moved to third on a sac-bunt from Borkowski. The ball was bobbled by Hurst at first, but the call on the field was that Borkowski was out. After the umpires got together to discuss the play, the call remained out, and Montgomery was not pleased as he gave an earful to the umpires.

Greico followed with a groundout to score Mikami, trimming Maryland’s deficit down to one.

Neither side scored the next three innings and Maryland dropped the first game of its doubleheader, 8-7.

Maryland scored first in its second game of the day against Binghamton. Ellefson notched an RBI single into right with two outs in the bottom of the first.

The Terps added to their lead the very next inning.

After Jones and Kiley Goff grounded out to start the second frame, singles by Mikami and Borkowski put two runners on for Greico. Greico chopped a double over the head of Makayla Alvarez at shortstop, scoring Mikami to extend Maryland’s lead to two runs.

Maryland added a third run in as many innings thanks to the speed of Jaeda McFarland. Pinch running for Schlotterbeck on second, McFarland stole third and advanced home after the throw from Hailey Ehlers was mishandled by Shelby Carvalho at third base.

Mikami, Borkowski and Greico opened the fourth inning with three straight hits to bring in the Terps’ fourth run of the game.

Ellefson followed with a sac-fly, giving the Terps a 5-0 lead.

Later in the fourth, Okada stole second and Greico stole home on a double-steal to score Maryland’s third run of the inning.

Butler brought home Okada on an RBI double to give the Terps a seven-run advantage.

Borkowski scored the Terps’ eighth run of the game on a groundout off the bat of Okada, giving Maryland the mercy-rule victory over the Bearcats.