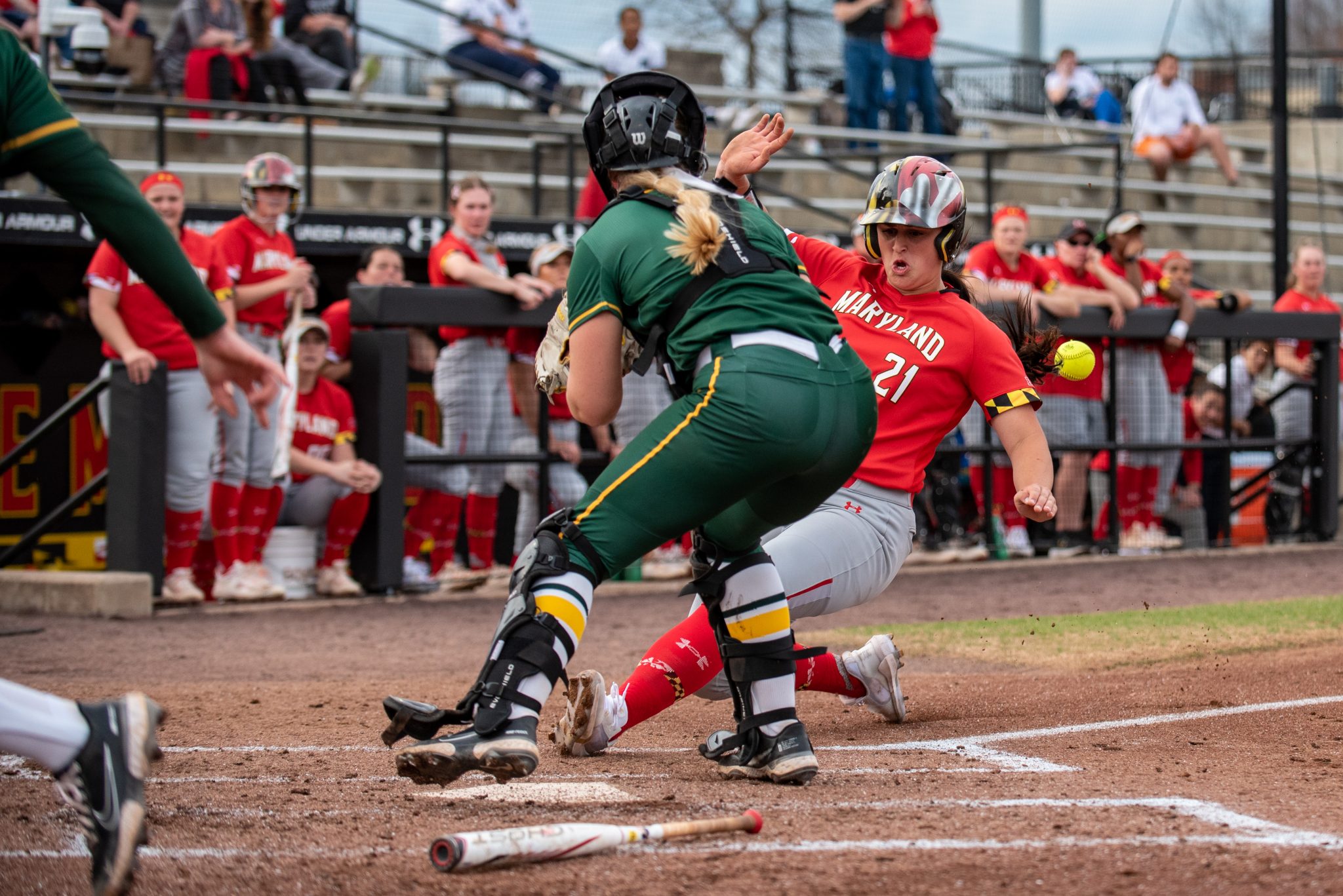 At the top of the fifth inning, North Dakota State outfielder Molly Gates hit a groundball to first base. What should have been an easy out turned disastrous when Maryland softball’s Mackense Greico reached to tag the runner, but the ball slipped out of her glove.

Runners taking off from second and third advanced and the Bison managed to tie up the game in the fifth.

To add insult to injury, the next at bat resulted in a sacrifice fly. North Dakota State took the lead over the Terps — one that could have been avoided if it hadn’t been for the preceding error.

That was one of several defensive lapses that allowed the Bison to earn a 3-2 victory despite Maryland having twice the amount of hits.

The past couple of games, the squad has suffered defensively from avoidable mistakes. Coach Mark Montgomery was adamant that it had to change.

“I don’t know that they’re down about it, but they know that I have higher expectations of us defensively,” he said. “We train really hard defensively … The last several games, we’ve made too many errors.”

The Terps made similar mistakes in their second game of the day against Monmouth, but it was accompanied by a better offensive performance.

Following their first home game of the year against UMBC, Maryland hosted the Capital City Classic for the first time since 2019. On day one, the Terps managed to split their first two games, downing the Hawks, 11-4.

The game against Monmouth was originally scheduled to open the Capital City Classic on Thursday, but rain pushed it to the next day, causing Maryland to play its 10th doubleheader of the year.

First they had to play North Dakota State.

The Terps were first to get on the board thanks to a Ruby Butler sacrifice fly in the bottom of the second inning. The long ball allowed pitcher Haley Ellefson to score for only her second time this year.

The lead wouldn’t last long, though. After a Dez Cardenas hit reached the outfield, Butler was set for the cutoff, but appeared unaware that there was a runner charging home.

Maryland went back ahead in the bottom of the fourth — but again it wasn’t for long. In similar fashion to their first run, the Bison benefited from a Terp defensive lapse. A Greico error allowed for a sacrifice fly which gave North Dakota State the lead.

Maryland had several chances to answer back. In both the fifth and sixth innings, the Terps had a runner in scoring position. The team couldn’t capitalize on either opportunity. The bottom of the batting order couldn’t save Maryland in the seventh and resulted in a 3-2 loss.

“I thought we played very well,” Montgomery said. “The downside was they got one hit in the same inning that we made two errors, and that gave them two runs.”

[Maryland softball is ready to take control in home opener]

The Terps lost for the seventh time in their last eight games. The next one, however, was against a three-win Monmouth Hawks, who Maryland had defeated less than a month prior, 14-4.

Maryland got off to a good start, ending the second inning with a 3-1 lead that included a home run from Michaela Jones — her third and the team’s seventh of the year.

But a disastrous third inning saw Monmouth score three runs and take the lead thanks to a hit by pitch with bases loaded and an error near second base.

It only took one inning for the Terps to do the same. Maryland scored five in the bottom of the fourth, retaking the lead and claiming a five-run cushion.

The Terps’ defense also picked up after the third inning. Despite the disappointing start, pitcher Trinity Schlotterbeck recovered in a major way. The rest of the game, the Hawks never had more than three batters at the plate in a single inning.

“[Schlotterbeck], who seemed to be struggling in the one inning, bounced back and pitched beautifully down the stretch,” Montgomery said. “I’m pleased with the way we played, and I’m pleased with the process that we’re doing and how we’re going about it.”

Maryland ended the game with a batting average of .517, their highest of the season. Extra runs came for the Terps in the sixth, but by then they were well clear of the Hawks, securing an 11-4 win.

“When we got [the players] away from worrying about the outcome of the hit, or the walk, or the strikeout, and we got them more worried about swinging at strikes, taking balls, and got it back to really simple, I think that’s why you saw a better … offensive performance today,” Montgomery said.