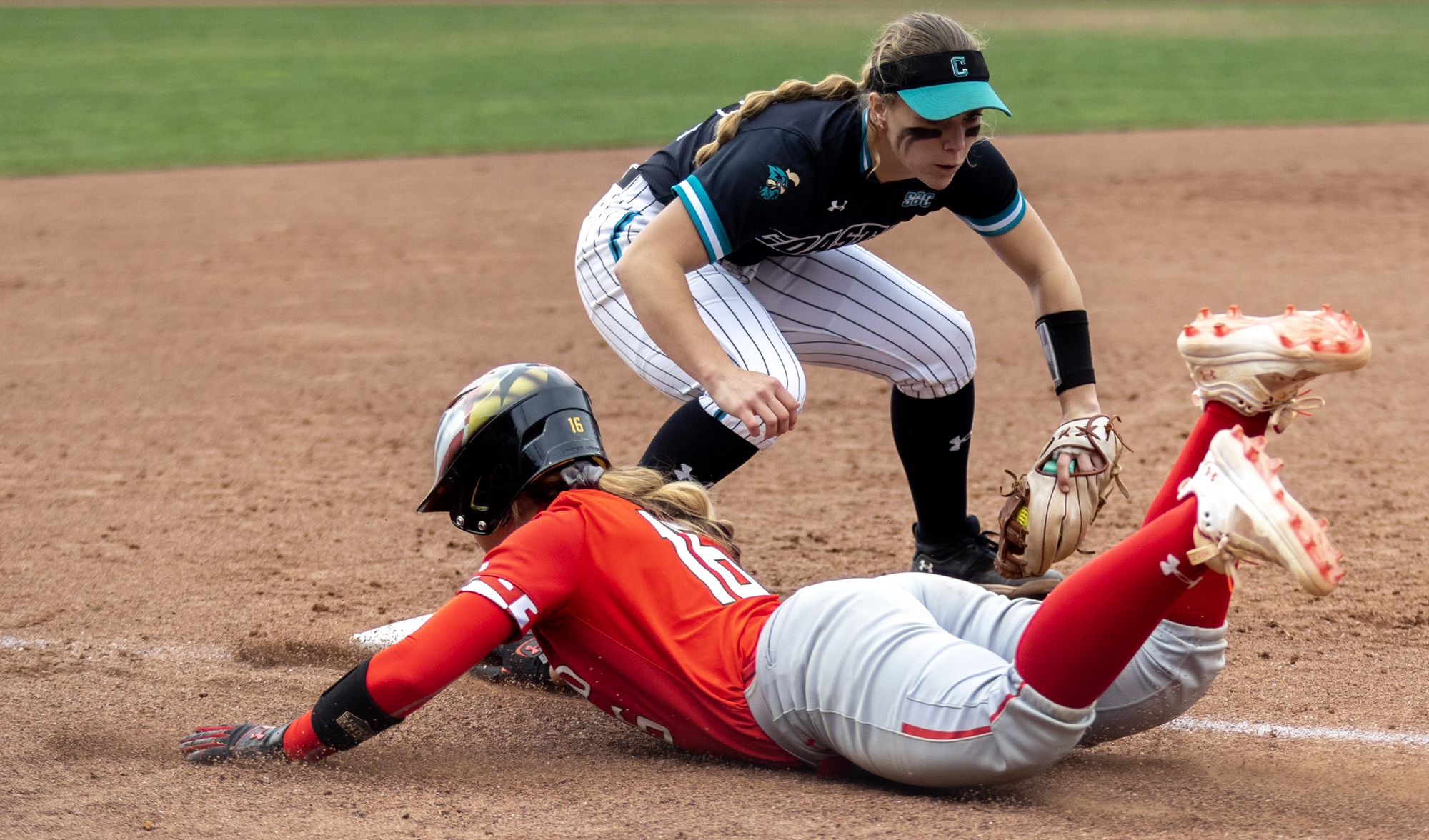 Kiley Goff dives back to third base during Maryland softball's 5-2 win over Coastal Carolina on Feb. 26, 2022. (Julia Nikhinson/ The Diamondback)

Boston College came to bat in the bottom of the eighth, looking for a walk-off win with the game tied, 2-2.

With two runners on and two outs, Kennedy Labshere entered the batter’s box for the Eagles. Labshere singled up the middle, driving home the winning run of the game from third.

Maryland lost both of its Saturday doubleheader games. The Terps fell to Boston College in walk-off fashion, 3-2, and later fell to Villanova, 8-7.

Maryland’s bout with Boston College started out as a pitcher’s duel, with the first score of the game coming in the fourth inning.

In the second inning, both teams had opportunities to score but couldn’t convert.

Taylor Liguori stepped into the batter’s box for the Terps with runners on first and second and two outs. Liguori grounded out to third, ending the Maryland threat.

In the bottom half of the inning, Boston College had two runners on with no outs. A sac-but and back-to-back groundouts to short ended the Eagles’ scoring chance.

Maryland struck first in the top of the fourth frame.

Taylor Okada led off with a double and moved to third on the second out of the inning. Kiley Goff walked with two outs to put runners on the corners. With Liguori at the plate, Goff took off from first. Goff got trapped in a rundown, allowing Okada to score from third before she was tagged out.

The Terps’ aggressive baserunning gave them a 1-0 lead.

Maryland had a chance to extend its lead the next inning.

The top of the fifth frame started with back-to-back singles to put two runners on. Megan Mikami grounded out to second, advancing both runners into scoring position for Mackense Greico. Greico flied out to deep left to bring home Merissa Borkowski from third for the Terps’ second run in as many innings.

Boston College got on the scoreboard in the bottom of the fifth frame. After two quick outs by Haley Ellefson in the circle, the Eagles strung together two hits and a hit-by-pitch for a run. An RBI double off the bat of Elisabeth Laviolette scored Ellie Mataya from second to cut the Eagles’ deficit in half, 2-1.

Courtney Wyche took over for Ellefson in the bottom of the sixth. Through five innings, Ellefson only gave up one run and struck out four batters.

Wyche gave up a leadoff double, followed by a sac-bunt and an RBI groundout. Boston College tied the game, 2-2.

Neither offense could muster a run in the seventh, sending the game into extra innings.

The Eagles’ walked off as winners in the bottom of the eighth.

Abigail Knight led off with a single and eventually scored with two outs in the inning. With Labshere at the plate, Knight and Gianna Bocagno pulled off a double-steal of second and third, putting the winning run 60 feet from home. Labshere singled, allowing Knight to score and the Eagles’ to win in walk-off fashion, 3-2.

Maryland got out to a fast start in its second game against Villanova.

Jaeda McFarland and Mikami led off the bottom of the first with back-to-back singles. Greico struck out swinging for the first out of the inning, to bring Liguori up to bat. Liguori singled into center field, scoring McFarland from second. An error by Sydney Hayes in center field allowed Mikami to score from first, putting the Terps up 2-0.

The very next batter, Okada, singled through the left side of the infield, allowing Liguori to score Maryland’s third run of the inning.

The Terps added another run in the second.

With one out in the inning and Mikami at second, Liguori stepped into the batter’s box. Like in her previous at-bat, Liguori singled up the middle to score Mikami.

[Maryland softball pitchers Schlotterbeck, Wyche have stepped up when it mattered most]

Leading off the top of the fourth for the Wildcats, Ally Jones crushed a solo home run on a two strike count to put Villanova on the scoreboard.

Ellefson entered the circle in relief of Trinity Schlotterbeck with two outs in the fifth, and the first batter faced was Jones. Jones clubbed a three-run homer, tying the game, 4-4.

Through her first three at-bats, Jones was 3-3 with one double, two home runs, and all four Wildcat RBIs.

Maryland started the bottom of the fifth inning with three consecutive singles to load the bases for Michaela Jones. Back-to-back groundouts by Jones and Ruby Butler plated runs for the Terps, putting them back in front. Regan Kerr followed with a double through the right side to score Okada. Maryland reclaimed its lead and left the inning up, 7-4.

The Wildcats responded in the top of the sixth to take their first lead of the game.

Ellefson walked the next batter and Schlotterbeck was put back into the circle.

Neither offense scored in the seventh, resulting in an 8-7 Villanova victory.

Maryland’s second doubleheader loss of the season sent it back to .500, at 9-9.